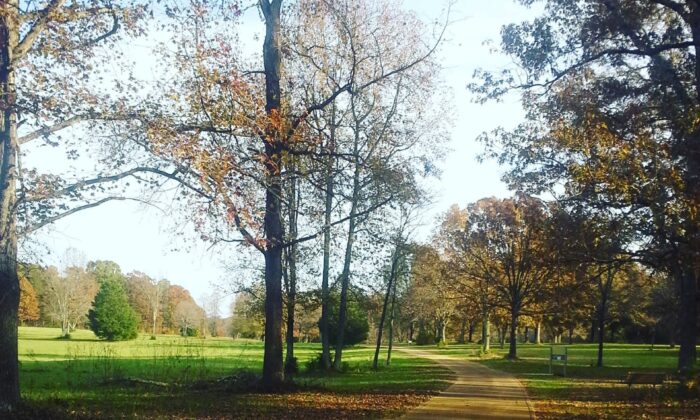 Armies during the Revolutionary War often fought on roads. The Battle of Cowpens was fought along the Green River Road. (NPS)
Destinations

Cowpens: The Battle for Land and Country

Cowpens Battlefield, located in rural western South Carolina, is a beautifully maintained piece of history by the National Park Service. Complete with a paved 1.2-mile battlefield trail, a picnic area, and a resources-packed visitor center, the 845-acre park feels more like a nature preserve than a tribute to American history.

And yet, this battlefield, surrounded by a variety of trees and stunning scenery, is home to one of the most instrumental battles of the Revolutionary War. The Battle of Cowpens, fought in January 1781, turned the tide of the war and paved the way for the Patriots to victory at Yorktown.

We pulled up to Cowpens Battlefield in late September, admiring the many trees that were just beginning to turn color. We parked our car and unloaded our two toddlers, wondering how much history we could soak up with children in tow.

The battlefield and park are amazingly child-friendly. We had a picnic lunch under some large trees and open pasture (the name for the battlefield came out of the surrounding pastureland), and then walked the self-guided battlefield trail, dotted with plaques and informational boards about the battle.

It’s hard to imagine that a place so serene and peaceful marks the ground where American Gen. Daniel Morgan outwitted and overtook his enemy, Lt. Col. Banastre Tarleton. Commanded by Lord Charles Cornwallis to destroy Morgan, Tarleton and his British troops pursued the Patriots and scouted Morgan’s army near the Pacolet River in South Carolina’s backcountry.

Prior to Cowpens, the British had been tearing through the South, capturing Savannah, then Charleston and Camden. They were convinced the war was in their pocket and thought the guerrilla warfare in the rural colony backcountry was nothing to worry about.

In January 1781, the colonial population loyalties were split, causing deep conflict and tensions between neighbors and sometimes even families. Both Patriots and Loyalists organized militia, turning against one another with force and devastating their countryside. In the midst of this fighting, Gen. Nathanael Greene split his Southern Continental army and commanded Morgan to take his troops into the Carolina backcountry and wreak havoc on the British in whatever way they could: cutting supply lines, hampering operations, causing chaos.

When Tarleton caught up to Morgan, he expected an easy victory. He underestimated the way the men of Morgan’s army knew their geography, and how hard they were willing to fight for their land.

Knowing Tarleton had little respect for the American militia, Morgan organized his troops into three lines on the rich pastureland meadow. He placed his artillery in the middle and his dragoons on either side. Lt. Col. William Washington’s cavalry surprised Tarleton and sent the British dragoons scattering. When Tarleton sent his 71st Highlanders toward the line, Morgan’s troops reformed, devastating the British soldiers in a double envelopment.

In less than an hour, on a scenic, unassuming meadow, a decisive victory was won for the Patriots. The British army suffered nearly 900 casualties (110 dead, more than 200 wounded, and 500 captured), while the American army suffered less than 100.

Stepping Up for Love of Country

Visiting the Cowpens Battlefield, my husband and I were reminded that war is fought in the most ordinary of places. Bravery and heroism need no special stage, and the weightiest victories are often found where no one seems to expect them. The victory on this unassuming field changed the course and psychology of the entire war. The British army moved out of the Carolinas and into Virginia, where they surrendered at Yorktown in October 1781.

In addition to a picnic area and battlefield loop, the park also boasts a museum that contains a reproduction 3-pounder cannon and an hourly viewing of the film “Cowpens: A Battle Remembered,” and a 3.8-mile auto loop road that outlines the perimeter of the battlefield.

As we sat in the field, munching on cheese and crackers, watching our girls as they collected fallen leaves and sticks, we reflected on what might have happened in the war had the militia not been willing to step up and defend their land. A love of country, of place, and home led the army to fight so valiantly at Cowpens. The National Park Service has honored that love of land and place by preserving it so well, and making it accessible for others to explore and learn about it.