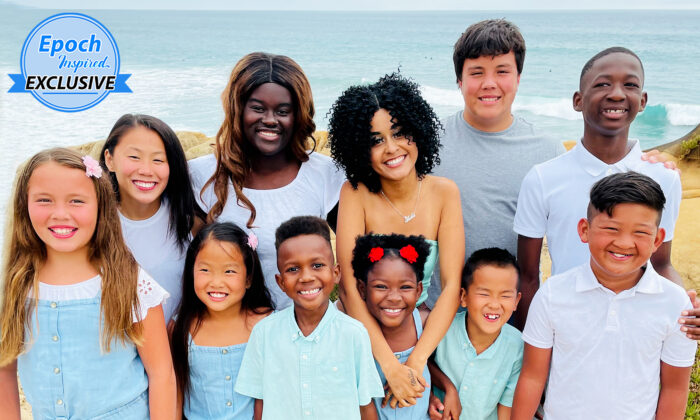 An Arizona couple with two biological and seven adopted children have just welcomed two more adopted siblings into their home, making them a family of 13. The proud parents, who call all their kids “precious jewels,” claim God directed them every step of the way.

Elementary grade school counselor Maria Hansen-Quine, from Phoenix, and her husband, Sam Quine, who himself is an adopted child, told The Epoch Times that, for them, faith is everything.

“We have two kids from Ghana in West Africa, four kids from China, and now three adopted from the United States, as well as our two biological children,” Maria said. “Each time God directed our steps.

“The miracle of our every day is not lost on me. I mean, to think that a little girl from the Faroe Islands married a boy from South Korea, who now lives in Phoenix, Arizona, with a total of 11 jewels. Crazy, right?”

Talking about their recent adoption, Maria said she had been working with a student for 18 months when she learned both the girl and her younger brother desperately needed a permanent home. Maria and Sam, a credit manager for a large manufacturing company, said that they were not planning to adopt more.

“I am not sure what specifically inspired us, except for God,” she said. “We were not planning it, nor did we expect it. I was returning the phone call of their caseworker when I realized how big the need was.”

Maria had a special connection with the girl, so much so that she encouraged five of her coworkers to adopt. But when she learned from the caseworker that she and Sam could become a “kinship placement,” something clicked. “It was as if, in that moment, God literally opened our eyes to see them as our children,” Maria recalled. “Two weeks later, they were placed in our home, and ten months later, they legally became our son and daughter.”

The adoption was approved by a judge in October. After approximately 1,825 days in foster care, the siblings finally had a house to call home.

Sam was himself adopted in the 1970s by an American Navy couple with two daughters, living in Japan. They found Sam after numerous attempts to adopt a baby boy at an orphanage in South Korea; he was left on the doorstep in a box. The staff initially feared he was too weak to thrive and asked the couple to come back in a few months.

But one dedicated staffer kept vigil, feeding and caring for him, until his new parents could bring him home to the United States.

Maria, who is working on a book about their family’s journey so far, beautifully penned Sam’s adoption story in these words: “God knew he was going to struggle, and so He had a story already planned. … God put the baby boy on the heart of a woman, a woman whose name is unknown. This woman would be so moved that she would spend the next few months sitting by his crib. She would sit there day and night, feeding him. God unexpectedly used this woman to give the baby boy life. When the couple returned, their son was a healthy chubby baby.”

Maria said that she discussed adoption with Sam even before they were married.

“It was on both of our hearts,” she said. “When we did get married, adopting was part of our life plan; we talked about having one adopted jewel and one biological jewel.”

Maria describes their first adoption as “unexpected, extraordinary, and miraculous.” Approaching 30 and married five years, she and Sam were living in New Jersey while Maria studied Clinical Social Work at Rutgers University.

“We had no kids and literally became parents within a weekend,” she said. “There were of course many details that God orchestrated leading up to the weekend.”

While babysitting twins for friends, Maria and Sam were invited by the couple to accompany them to meet the twins’ birth mother the next day; she wanted an adoptive family for her newborn daughter. They weren’t expecting this at all, as Maria put it, and the couple had already planned to move back to Washington State—but something compelled them.

“The next morning, very early, we drove three hours into the state of Pennsylvania to meet both the birth mom and her precious new daughter,” Maria recalled. “We spent the whole day at the hospital, and at the end of the day, she told us she wanted us to have her daughter. She chose us, and in that moment, God told me that my new daughter would be the best gift He would ever give me.

“It is 19 years later, and I still tear up thinking back to this very precious and sacred moment.”

When people ask how life is today, the mom’s answer is twofold: “Blessed and hard, all at the same time.” Some of her kids have special needs, and she knows there is inherent trauma for any adopted child who can’t stay with their birth family.

But Maria and Sam have dedicated themselves to learning about the effects of trauma on early brain development and parenting with compassion. “We like to think of ourselves as trauma parents, brain-based parents, or connected parents,” she said.

“We try to view our jewels holistically and individually, realizing that each one needs something different from us. Mix this in with grace, a whole lot of grace—for them and us.”

The Quines’s is a happy household. Maria and Sam preach kindness, and the family has fun together hiking, bike riding, swimming, skiing, and making up games. The couple said that they are working hard to help all of their children thrive.

While many claim the kids are lucky, Maria maintains that she and Sam are the lucky ones. They’ve never looked back.

“We adopt because we have been so richly loved and blessed by God, why would we not want to share that love?” she said. “We adopt because there is a great need for families, and we can meet that need.

“We honestly never set out to adopt or to have lots of kids; we simply set out to live life to the fullest, to say yes each time God asked us to do something, and to ‘carpe diem’ along the way.