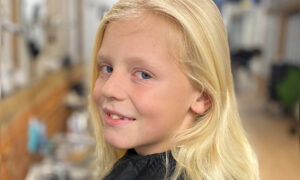 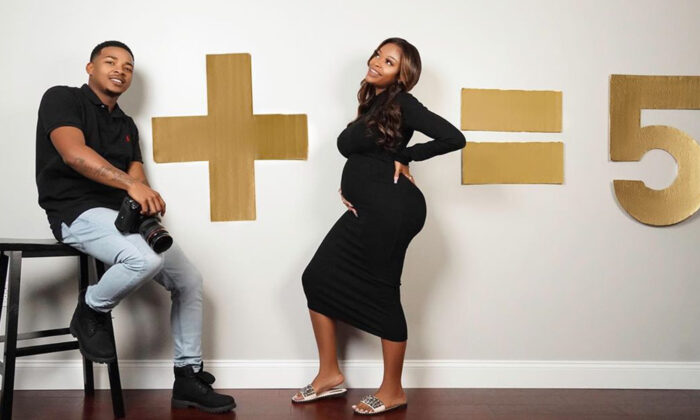 One year after a Pittsburgh couple’s hopes were dashed by suspected infertility, the mom-to-be received a happy surprise, and then another one.

Dee Michelle and her partner, Antonio Livingston, are now expecting three babies in a phenomenon called rare double pregnancy. The phenomenon, also known as superfetation, can occur when a woman continues to ovulate after becoming pregnant. In Michelle’s case, babies A and B are twins; baby C was conceived six days earlier.

Superfetation is extremely rare. According to Healthline, there are only a few suspected cases in medical literature, but curiously, the phenomenon is common in other animal species such as fish, hares, and badgers.

To add to the mystery, multiples do not run in the expectant mother’s family. “We were shocked … we don’t have any twins, triplets, nothing,” she said.

The joy that these 3 babies have brought to us and our families is indescribable!❤️ First off, last year my doctor’s told me that I wouldn’t be able to have kids and would need surgery. But God said otherwise and gave us 3 healthy babies along with a completely healthy mother!👶🏽👶🏽👶🏽👸🏽 Babies A & B will be identical since they share everything and Baby C will be fraternal since he/she is by itself. We are hoping to have two genders! 🤞🏽Baby C is also 6 days older than Babies A&B 🤣 Babies A & B are at risk for developing Twin to Twin Transfusion Syndrome (TTTS) which is a disease of the placenta which basically causes one baby to grow bigger and stronger than the other baby, but could be fatal for both if one is receiving too many nutrients and if one is receiving too little nutrients. (One twin − called the donor – becomes dehydrated; and the other − called the recipient − develops high blood pressure and produces too much urine and over fills the amniotic sac.) We are believing that all 3 of our babies will be healthy, equal in size and have no complications! They made it safely through the first trimester without any complications so we believe that the second and third trimesters will be the same!❤️ Please continue to pray for us and our babies as we have a long journey ahead of us! Thank you all for your love & support! These are their 12 week measurements: Baby A: 43mm, Heartbeat 143 bpm Baby B: 46mm, Heartbeat 147 bpm Baby C: 53mm, Heartbeat 155 bpm Subscribe to our YouTube channel: https://m.youtube.com/channel/UCAgw6Sm5cCcZGRNPwJEmYhw #triplets #naturaltriplets #tripletpregnancy #blacklove #tripletsofinstagram #tripletlife #pittsburgh #pittsburghhairstylist #pittsburghstylist #pittsburghphotographer #14weekspregnant #pregnancylife #blackfamilies #relationshipgoals #theshaderoom #microlinks #blackexcellence #multiples #tripletbelly

The couple’s dramatic pregnancy reveal was shared via a creative photoshoot. Livingston, a photographer, set up a scene using gold symbol decals on the studio wall. By placing himself and Michelle, a hairstylist, in strategic positions, the resulting equation read: Livingston + Michelle = 5.

The perplexing solution, of course, revealed the couple’s big secret: triplets! The photo also inaugurated the first-time parents’ Instagram page, “Dee and T Plus 3,” a page upon which they have pledged to chronicle the highly unusual pregnancy.

Posting their 12-week scan on Sept. 21, Michelle explained, “[L]ast year my doctors told me that I wouldn’t be able to have kids and would need surgery. But God said otherwise and gave us 3 healthy babies along with a completely healthy mother!”

Babies A & B, she continued, will be identical. Baby C will be fraternal as they are by themself. Worryingly, the twins are at risk of developing a condition known as twin-to-twin transfusion syndrome (TTTS), whereby one of the babies may consume more nutrients from the placenta than the other, causing a deficit to the twin.

Michelle and Livingston, however, remain optimistic.

“We are believing that all 3 of our babies will be healthy, equal in size, and have no complications,” they wrote. “Please continue to pray for us and our babies as we have a long journey ahead of us!”

At the time of writing, the couple has received their babies’ genders, but both mom and dad are opting to remain in the dark until their planned gender reveal takes place.

“It’s just a lot of joy,” the father-to-be told WTAE, “you know, a lot of positivity is coming from all angles right now.”