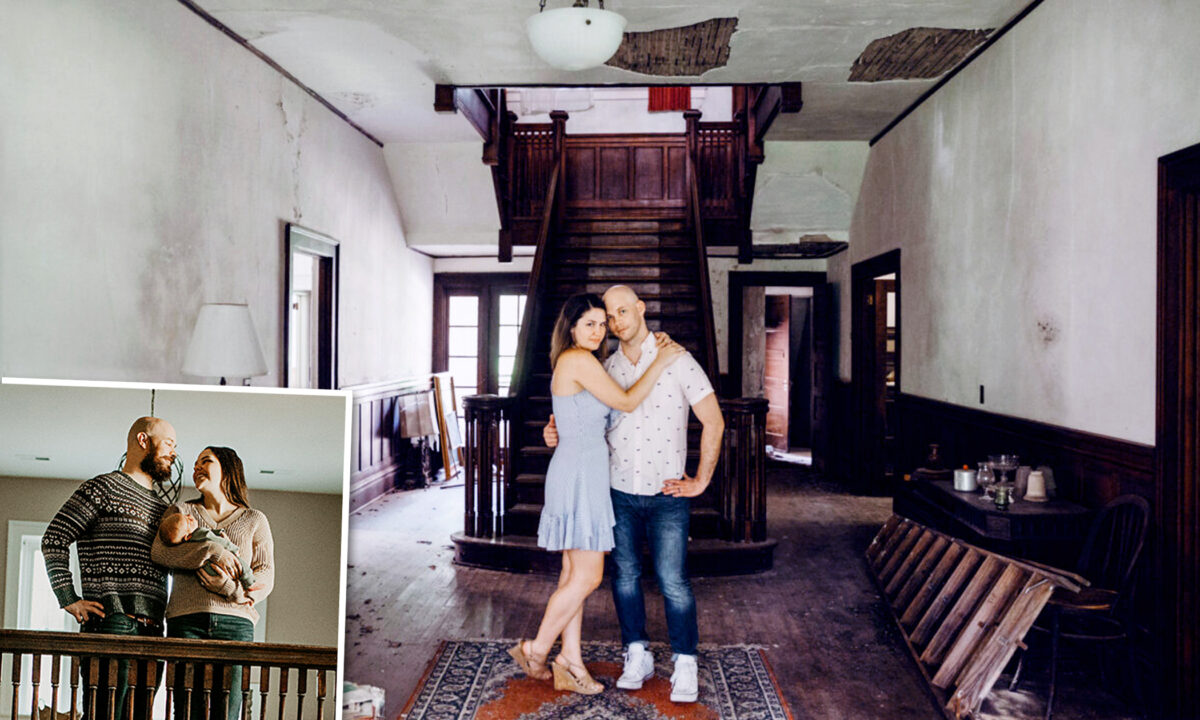 'This home was built for a family and we intend to keep it that way.'
BY Anna Mason TIMEAugust 8, 2022 PRINT

The day Trey and Abby Brothers brought their first-born baby home was extra-special. Their son has started life in a rambling 109-year-old mansion – but his parents aren’t super rich; they’re just smart.

Trey, 33, works in information technology, and Abby, 31, is a registered nurse. They purchased the 6,000-square-foot, six-bedroom mansion in Aberdeen, North Carolina, for $155,000. Built for wealthy industrialists the Page-Wilder family in 1913, the brick colonial revival mansion had stacks of original features. When Trey and Abby—now its third owners—began work, they took great care to preserve as much as possible.

After pouring heart, soul, and sweat into making it livable, it is now valued at approximately $900,000—and is their “forever home.” When they bought it, in June 2018, the Page Mansion was uninhabitable. The abandoned house had stood vacant for around 40 years, succumbing to the elements.

“I was looking online to find a home in a different area,” Abby told The Epoch Times. “I zoomed out of my search area and this house was the first one that popped up. I knew the moment I saw the home that it was meant to be ours.”

Abby said she just loved the house, calling it “the ugliest pretty house” she had ever seen. Two weeks later, the couple went to see it. The front door had no lock, so they went straight in. The dilapidated central foyer had a grand staircase, and the moment Trey saw it, “it drew him in.”

“We were walking around the property trying to figure out how we could afford buying it,” Abby said.

The majority of the windows were broken; the front door was broken; the plaster was cracked and falling in every room. The house would require new walls, plumbing, electrical work, air conditioning, plus a new roof. But despite all of the obvious problems, the husband and wife saw their future home, and fell in love.

It was an enormous undertaking, especially since the year they renovated happened to be one of the wettest years North Carolina has ever seen. Their renovations had to be postponed several times, and they were under great pressure to complete works within a set time limit.

“With the renovation loan we used, we had six months to complete renovations,” explained Abby. “Each month we had to compose an extension request and explain why the renovation wasn’t complete. We can’t control the weather, so we worked on projects that weren’t weather permitting.”

The biggest problem was in the dining room, which has sinking into the basement due to years of water damage, necessitating new hardwood floors, subfloor, and floor joist.

“It was rather disheartening to see the new floor joist installed and have a hurricane come through the next day, dumping massive amounts of water into the home,” Abby recalled.

“Everything worked out in the long run, but in the moment, we felt defeated.”

Their struggle was worth it.

The pair spent nine months on renovations just to make the property livable—doing as much as they could themselves. They spent approximately $270,000 in renovations, continuing to work on cosmetic projects as and when they can.

Both Trey and Abby were raised in North Carolina, but when they first saw the house, they were living in Baltimore, Maryland. A few years on, they have fulfilled their wish to relocate back, and have created a wonderful family home.

Some of the rooms off the foyer include a study, living room, half bathroom, and dining room. The second floor features five bedrooms and three bathrooms. Each room in the house contains an original, refurbished piece of furniture, and they have preserved the doors and lighting.

“This is the home we saved from further damage and the possibility of being torn down,” Abby said proudly. “It’s the home we brought our first child home to, and the home some of our friends were married in.”

The couple say they have no intention of selling, and hope one day to pass Page Mansion along to their children. “This home was built for a family and we intend to keep it that way,” she said.

The Brothers point out there are so many beautiful properties out there needing love and attention, and encourage anyone and everyone to purchase and renovate an older property, if they can.

“Old homes can be renovated into anything a person wants them be!” said Abby.