'A feast for the eyes and the ears, and the imagination' 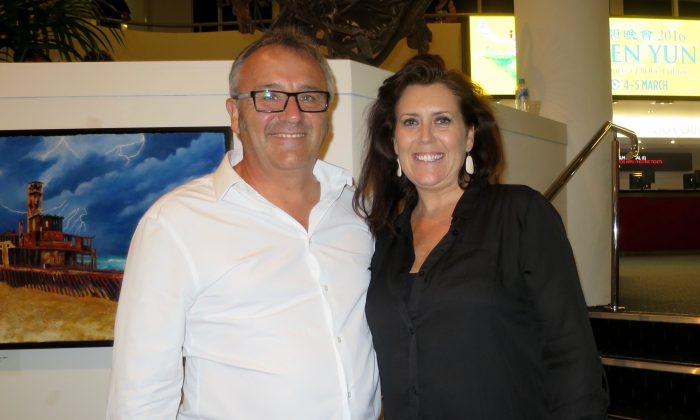 Graeme and Alison Geale were touched and impressed at Shen Yun Performing Arts on the Gold Coast, on March 4, 2016. (Epoch Times)

Mrs. Geale is the director of sales at Southern Cross Austereo and is a committee member of the Gold Coast Business Excellence Awards. She said she had never seen anything like Shen Yun.

“Wow! I am super impressed technically. Timing, music, use of multimedia with the dancers, but I am also touched by the story,” she said. “So it emotionally grabs me and technically grabs me straight away.”

Mr. Geale, an English and drama teacher, said he had never seen anything like Shen Yun and words could not explain his experience.

“This performance is absolutely marvelous,” he said. “It’s incredible! It’s a feast for the eyes and the ears, and the imagination. I’m loving it!”

Based in New York Shen Yun has as its mission to revive China’s divinely inspired culture through music and dance.

Mrs. Geale said she felt there was so much to learn about Chinese culture but in today’s society, since the Cultural Revolution in China, so many people are cut off from that. She feels each dance story in Shen Yun gives an insight into that divinely inspired world.

“It’s giving me a little bit of a window into the soul that is China,” she said.

She always felt China was a country very rich in history and steeped in belief and Shen Yun reinforced that for her. She said that is not the China people see today under communist rule. She appreciated the divine aspect in the performance.

“It makes me feel safe. I like the idea that there is some kind of heavenly help for us here on earth … I do enjoy the idea that guidance could come from the above. I enjoy it! I embrace it!”

Mr. Geale agreed saying that China, since Mao was what people are familiar with, but Shen Yun was bringing back that glorious beauty.

“To see it being presented in that way with the wonderful dance and colors is incredible,” he said.
“I can see in the performance that there is … magic and beauty in that old world that have been squashed, and that’s a terrible shame. It’s a very uplifting performance, but it’s also a sad one.”

He also appreciated the divine aspect of the performance and felt it transcended all cultures, all religions.

“People are the same everywhere, they have the same needs. That kind of a mixture of religious and earthly beings is facilitating,” he said.

“It has to be relevant to today’s world because I think modern life is a struggle for all of us.”