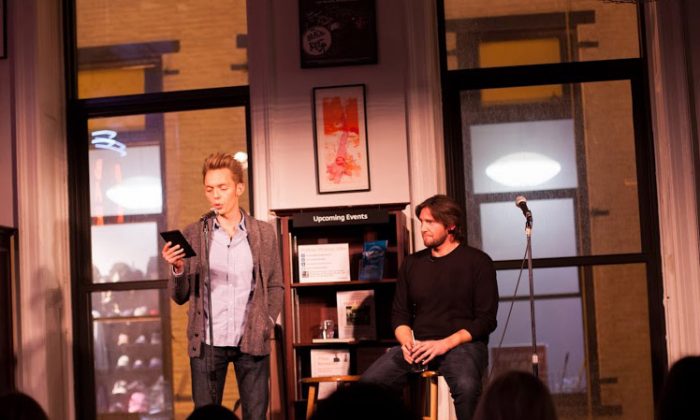 Joshua Fields Millburn regales the audience while Ryan Nicodemis looks on during a speaking engagement in New York City. Since paying off their debt and simplifying their lives five years ago, the two have become have become poster boys of sorts for the minimalist movement. (Courtesy of The Minimalists)
Canada

Could Minimalism Be the Antidote to Household Debt?

With household debt at an all-time high in Canada and showing no signs of abating, the minimalist lifestyle is offering an attractive option for some Canadians who wish to get off the consumption treadmill.

These days it isn’t rare to hear someone describe themselves as a minimalist, and blogs about the lifestyle are popping up in droves while how-to books are becoming bestsellers.

Tired of trying to “keep up with the Joneses,” Nova Scotia minimalist and blogger Mark Lowe downsized from a big house to an apartment, and went from owning his own business to a low-stress factory job.

He describes minimalism as “a way to escape the excesses of the world around us—the excesses of consumerism, material possessions, clutter, having too much to do, too much debt, too many distractions, too much noise.”

“Minimalism is a way of discarding the non-essential in order to focus on what’s truly important, what gives our lives meaning, and what gives us joy and value,” Lowe said in a recent blog post.

In the U.S., where personal debt is again rising after a post-recession lull, two minimalists have taken their message of living with less public, recently wrapping up the Canadian leg of their four-country, 100-city book tour on the merits of minimalism.

On the surface Joshua Fields Millburn and Ryan Nicodemus appeared to have it all—successful corporate careers at the same telecom company, luxurious suburban homes in Ohio, and fancy cars. But both were profoundly unhappy, anxious, and stressed, working 80-hour weeks in order to pay for their respective debt-driven lifestyles.

In 2009, the death of Millburn’s mother and the abrupt end of his marriage in the same month forced him to stop and take a hard look at what he wanted in life. The American dream he was striving to live was beginning to crumble.

It was then that he heard about minimalism and living simply, and it struck a chord. Millburn started purging his life of excess—left the job, traded the house for a modest apartment, gave away unessential possessions, and paid off all his debt.

At this stage, he says, he began to feel really good—so much so that others started to take notice.

Nicodemus was so moved by Millburn’s newfound well-being that he began his own life purge—putting everything he owned in boxes and taking out objects as needed. When 80 percent of his possessions remained boxed up after three weeks, he knew he was onto something.

The friends haven’t looked back since and have become poster boys of sorts for the minimalist movement; they have co-authored books and blogs, are making a documentary, and host regular public speaking events on how minimalism has changed their lives.

“We’re not proselytizing, I don’t want to ‘convert’ anyone to minimalism, I don’t even think that’s possible,” says Millburn, who now avoids credit and pays cash for everything.

“But I do want to share this recipe, and if people are able to squeeze the ingredients out of the recipe and create their own flavour of simple living, then we’ve done what we set out to do.”

The urge to live simply isn’t new, having been touted by many religious practices, philosophers, and authors for thousands of years. But a new secular wave of minimalism appears to be gaining traction, in part fuelled by necessity due to the 2008 financial crisis, but also by discontentment, with people realizing, like Millburn, that the American dream didn’t bring them happiness.

Three years ago it wasn’t uncommon to have only a handful of people show up to their speaking events, says Millburn. Today most of their talks (for which the tickets are free) are filled to capacity, attended by hundreds or thousands. Their popular blog, TheMinimalists.com, has 2 million followers and many of their bestselling books have debuted at No. 1 on Amazon.

One of the friends’ greatest inspirations, San Francisco-based author and minimalist Leo Babauta, writes a simple living blog, zenhabits.net, that ranks as one of the top websites in the world, with more than a million readers per month.

Millburn sees the growing interest in minimalism as an inevitable reaction to the spiritual emptiness of the consumption-driven lifestyle and a backlash against decades of ubiquitous advertising.

“The average person sees 3,000 advertisements a day, that’s a million a year, and none of us are immune to it,” he says. “We’re steeped in this culture—we are saturated with input, and I think this flavour of minimalism has been a very secular reaction to that.”

They moved to a simple cabin in Montana and started their own publishing company. Nicodemis, who struggled with drugs and alcohol in the past, is now clean and offers mentoring services to others facing various life challenges. Millburn has transformed his long-time passion for writing into a career, and has authored several books while teaching writing classes online and maintaining his blog. He also lost 70 pounds.

Clearing out the excess “stuff” has helped transform his worldview and seeps into all aspects of life, Millburn says. He now focuses his energy only on things that bring value to his life—health, relationships, personal growth, community, and yes, some carefully chosen material possessions. In short, he has reclaimed control of his life, time, and energy.

“Everything I do now aligns with my values, my beliefs, my interests, my desires, and it’s a lot more deliberate,” he says.