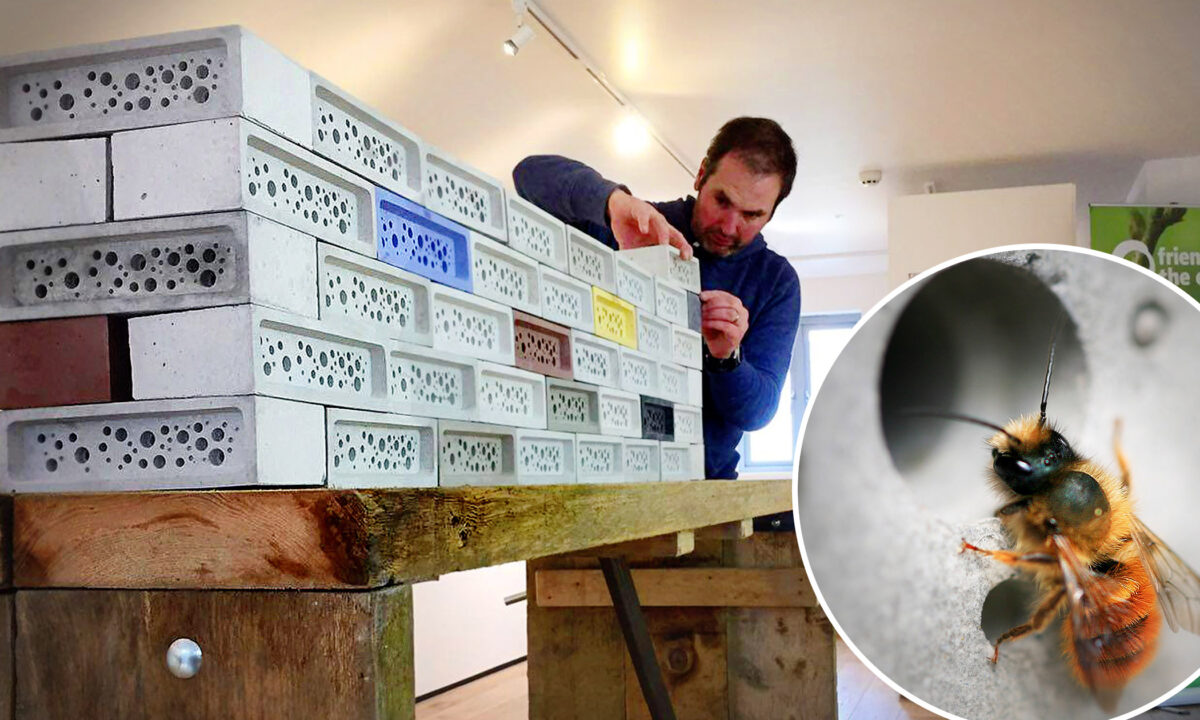 Could Bee-Friendly Bricks Save Bees? Inventor Makes Homes for Bumblebees From Bricks With Holes in Them

Beekeepers lost 45.5 percent of their managed honeybee colonies in the United States between April 2020 and April 2021. A phenomenon known as colony collapse disorder is mysteriously wiping out bees globally, which could have devastating effects on food production which requires healthy pollinators to sustain what is an $18 billion business. The EPA theorizes pesticides, mites, or disease could be behind this.

But some ingenious innovators out there are considering the bumblebee in their enterprises. Cornwall-based Green&Blue has created the “Bee Brick,” a specially designed, molded, environmentally friendly brick made out of reclaimed concrete, hollowed out with holes in it for solitary bees, such as the leafcutter, red mason, and other cavity-nesters, to dwell in.

The company boasts their bricks are made from 75 percent waste china clay, which they say makes them more “sustainable.” They fit seamlessly into the surrounding brickwork of your house, and the sleek design, which comes in an array of colors, also makes them attractive to stand alone in your garden.

It may be a novel idea, but how effective would they be if implemented on a large scale?

The idea is already being tried. New buildings over 5 meters high were required to house a bee-friendly block in a pilot project that was started in April 2020 in Brighton. The initiative follows similar trials in Dorset and Cornwall.

Mind you, Bee Brick is only meant for solitary bees, which do not form large colonies in hives or make honey (nor do they often sting), but it could still offer nesting and hibernating space, potentially preserving some of their highly valued work of pollinating.

The fact is, not all experts think Bee Brick is a good idea. Some cite sanitary concerns because the bricks cannot be cleaned and say they are prone to mites and disease spread. Dave Golson, a professor of biology at the University of Sussex, thinks the initiative won’t make much of a difference. “Bee bricks seem like a displacement activity to me,” he told The Guardian.

“We are kidding ourselves if we think having one of these in every house is going to make any real difference for biodiversity. Far more substantial action is needed, and these bricks could easily be used as ‘greenwash’ by developers.”

Speaking of the Brighton pilot, Lars Chittka, a professor in sensory and behavior ecology at Queen Mary University, said further observation is needed. “It might well be that the Brighton project provides an opportunity to study the risks and benefits on a reasonably wide scale, and over an extended period — say five years,” he said. “But I would certainly recommend not copying this project across the country before the long-term benefits and risks are explored.”

Green&Blue state that “designing the product is one challenge,” but educating others on “sustainability” and “the importance of solitary bees and why we need to provision for them, that’s the bigger challenge,” to provide “better education and better understanding of the importance of our wildlife.”

Both Green&Blue and Sebastian Worms, a graduate student from the University of Louvain in Belgium, agree: Bee Brick could be an educational tool for children, but he added, “To help bees, it would be better to introduce more flowers.”

That message was echoed by Graziano da Silva, director-general of the U.S. Food and Agriculture Organization, who said that “growing flowers at home to feed bees contributes to this effort” of saving our bees — and hopefully ensuring your continued enjoyment of coffee in the morning.