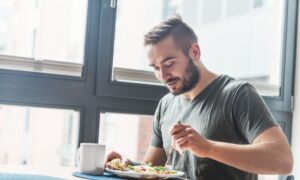 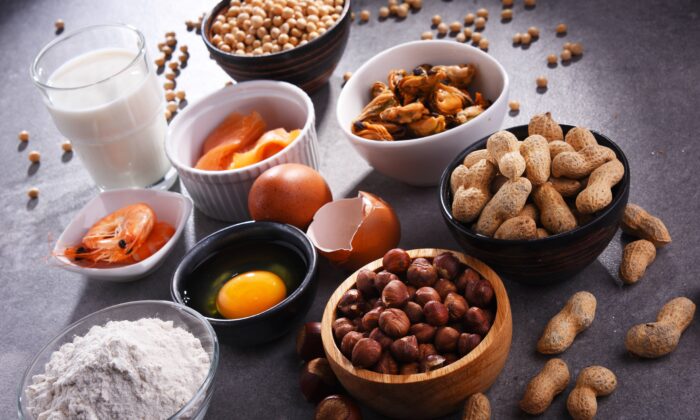 Food allergies are increasing at a dramatic rate and researchers are trying to unravel the causes. Current views point to a collision of factors. (monticello/Shutterstock)
Mind & Body

Could a Too-Clean Society Trigger a Rise in Food Allergies?

Systems in our body that protect us from toxic food may be involved in the dramatic rise in food allergies, say researchers
By Joseph Mercola
biggersmaller
Print

Rising rates of food allergies may be the result of environmental factors and a misfiring protection system, propose four immunobiologists from Yale University.

A paper published by the scientists in the journal Cell suggests an exaggerated activation of the body’s toxic food protection system in response to environmental factors is behind the increase.(1)

They write that as many as 8 percent of children in the United States have a potentially deadly response to what are classified as the major eight food allergens.

These are often referred to as the “Big 8” and include milk, eggs, wheat, soybeans, fish, crustacean shellfish, tree nuts, and peanuts.(2)

The U.S. Centers for Disease Control and Prevention reported a rising rate of food allergies in children from data gathered from 1997 to 2011.(5)

Researchers found that over a 14-year period, the rate of food allergies increased to 5.1 percent from 3.4 percent. According to the most recent data from 2016, that rate may have jumped again to 7.6 percent,(6) which means the rate has more than doubled in 19 years. The Yale immunobiologists propose this trajectory may be the result of an increasing amount of unnatural substances or environmental chemicals.(7)

Your Body Has a Food Quality Control System

Physicians and researchers are concerned about this increasing prevalence of  food allergies. The Yale researchers point toward the multiple sensory mechanisms your body uses to monitor what is consumed and how these affect allergies.(8)

These systems include smell, taste, and chemosensory processes established in the gut and impacted by your gut microbiome. The researchers argue that allergic responses play a role in the  body’s food quality control system. The system includes identifying and responding to food antigens, which can result in a lethal food allergy.

One prevailing theory for the rise in food allergies has been a “too clean” environment—called the hygiene hypothesis—in which children and adults are no longer exposed to natural pathogens in the environment, triggering the immune system to become hypersensitive.(9)

Writing in Clinical & Experimental Immunology in 2010, scientists expanded the explanation to include the presence of processed foods, dishwashing detergent, and other environmental chemicals, as well as a “too clean” environment with the absence of natural microbial exposure.

The Yale immunobiologists argue these all play a role in disrupting the internal food quality control system, designed to help protect your body from noxious chemicals and harmful substances. The group believes this theory may lay the groundwork for future research, treatment, or prevention. In a press release from Yale University, one of the authors of the new paper highlighted the problem researchers were facing.(10)

“We can’t devise ways to prevent or treat food allergies until we fully understand the underlying biology. You can’t be a good car mechanic if you don’t know how a normal car works,” said co-author Ruslan Medzhitov, Sterling professor of immunobiology and investigator for the Howard Hughes Medical Institute.

“One factor is increased use of hygiene products and overuse of antibiotics and, secondly, a change in diet and the increased consumption of processed food with reduced exposure to naturally grown food and changed composition of the gut microbiome,” Medzhitov said.

“Finally, the introduction of food preservatives and environmental chemicals such as dishwashing detergents introduced novel elements for immune systems to monitor.”

When your body detects toxins have been consumed, it also activates the parasympathetic nervous system, intended to help neutralize the health threat.(11) This response can trigger food allergies and a lack of natural threats can make the system hypersensitive.

The team believes the collective changes to the food supply and environment have effectively made the immune system respond to food proteins in the same way they would to protect against toxins.

Other theories that have been proposed for increased food allergies include overuse of medications used to reduce stomach acid, as these can alter your gastrointestinal microbiome.(16)

Research from King’s College London also proposed that when parents avoid introducing young children to foods known to produce an allergy, there was an increased potential the child would have a reaction later.(17) The study selected children who had a known allergic reaction to eggs or had eczema to evaluate if avoiding an allergen would increase or decrease a food allergy.

The data showed when parents avoided feeding their children peanuts, 13.7 percent developed an allergy by the time they were 5 years as compared to 1.9 percent who were introduced to peanuts earlier. Researchers are also questioning if food allergy rates are rising because we spend more time indoors, thus contributing to the fact that 40 percent of the population is vitamin D deficient.(18) Vitamin D plays an important role in regulating an effective immune response.

Research published in the Journal of Allergy and Clinical Immunology analyzing EpiPen use in the United States found a strong north-south gradient, where more were used in the northern states, suggesting there were “important etiological clues (vitamin D status)” that merit further investigation.(19)

Similar data was found in Australia two years later when it was revealed EpiPen use and anaphylaxis admissions were more common in areas receiving less sunshine, providing “additional support for a possible role of vitamin D in the pathogenesis of anaphylaxis,” read the Annals of Allergy, Asthma, and Immunology article.(20)

Is It a Food Allergy or an Intolerance?

There is a difference between a food sensitivity or reaction and a food allergy. A true food allergy is mediated by the immune system and triggered by a reaction to proteins found in a specific food or drink. Food sensitivities, also called food intolerance, is usually an unpleasant gastrointestinal reaction to something you’ve consumed but is not mediated by your immune system.(21)

For example, a true milk allergy is different from lactose intolerance.(22) The first triggers an immune response and the second triggers gastrointestinal symptoms from an inability to digest milk proteins. Type 1 food allergies involve immunoglobulin-E (IgE), which is an antibody found in the blood and mast cells in all body tissues.

After you’ve eaten the food the first time, cells produce IgE for the food protein that triggered the reaction, called an allergen. IgE is released and attaches to the surface of mast cells. This sets the stage for the next time you eat the food that contains the specific allergen. The protein interacts with the IgE on the mast cells and triggers a release of histamine.

IgE reactions sometimes start with itchiness in your mouth, followed by vomiting, diarrhea, and stomach pain. Some protein allergens can cross immediately into your bloodstream and trigger a body-wide reaction including dizziness or feeling faint, repetitive coughing, tight, hoarse throat, and a weak pulse.(23) It can also activate an anaphylactic reaction resulting in a drop in blood pressure, hives, and wheezing.

A Type 1 food allergy can take anywhere from a few minutes to a couple of hours to develop. A second type of food allergy, Type 3, is mediated by immunoglobulin-G (IgG). This is a delayed food allergy that happens 4 to 28 hours after exposure.(24)

Although most food allergies develop in childhood, it isn’t unheard of for adults to develop a food allergy. Data from a cross-sectional survey of adults living in the United States suggest at least 10.8 percent of adults are allergic to food. Information was gathered from October 2015 to September 2016.(25)

There were 40,443 adults who completed the survey, and while 19 percent reported some type of food allergy, only 10.8 percent reported symptoms concurrent with an IgE reaction. The study was published in the Journal of the American Medical Association in a collaboration between Stanford food allergy expert Dr. Kari Nadeau and scientists at Northwestern University.(26)

The researchers believe this contradicts a long-held belief that most allergies develop in childhood. Past data had estimated 9 percent of adults had true food allergic responses. In the cohort, researchers found 38 percent of those they determined to have food allergies had experienced a reaction that sent them to the emergency room and 48 percent reported at least one food allergy was triggered after age 18.

Some food allergies developed as an adult can be severe, such as the reactions that graduate student Amy Barbuto experienced in a Thai restaurant. In an interview with a writer from the Texas Medical Center, Barbuto recounted her first allergic response at the restaurant.(27)

Before that day she had a food intolerance to gluten, but in 2011 she suffered an anaphylactic reaction when the wrong soy sauce was used in her food. Since then she was hospitalized 25 times from 2011 to 2020 for allergic reactions. She told the Texas Medical Center about the difficulty of avoiding gluten.(28)

“It’s a hard one to avoid, even when you work your hardest to avoid it. My allergy is so severe that I could get exposed and not even know it. My food can look gluten-free, look normal … but all it would take is somebody having touched bread and then touched my plate,” Barbuto recounted in an article on the center’s website.

Your gut microbiome is vital to the health and optimal functioning of your immune system, which mediates an allergic response to food. By caring for your gut microbiome, you help protect your health. Fortunately, there are several ways you can care for these trillions of symbiotic microbial cells living inside and upon you.

Avoid antacids. They change your stomach acid and damage your gut microbiome.

Steer clear of antibiotics, including in your food. Antibiotics are dangerously overprescribed and you should not request them from your doctor or take them unless absolutely necessary. When you do, and take a quality probiotic to rebuild your microbiome.

Reduce or eliminate processed foods. These foods are high in sugar that feed harmful bacteria in your gut.

Optimize your vitamin D levels. Get outside and make some vitamin D through sensible sun exposure or use supplements if you live in areas with little sun.

There is also another, less obvious way to care for your microbiome. As veterinarian Dr. Karen Becker recently covered in one of her Healthy Pets articles, pets are good for your microbial health. Exposure to dogs can influence the developing immune system of children. Two studies were presented at the American College of Allergy, Asthma & Immunology in 2017 demonstrating children born in homes with a dog had a lower risk of allergic eczema and asthma,(12) supporting earlier research.(13)

The exposure to diverse bacteria and other microbes from dogs has led to them being called “the new probiotic.”(14) Dieter Steklis, a professor of psychology and anthropology at the University of Arizona, has studied the physical and microbiome relationship in humans and pets. He spoke about the topic with a journalist from the Tucson Sentinel.(15)

“It’s always surprised me how many diseases and disorders are linked to inflammatory processes that link back to your immune system. If having a dog actually tames your immune system, which is what it seems to do, then elderly who have a dog may have a lower chance of depressive illnesses,” said Steklis.

While getting a dog may be fun and games, allergies remain serious business. The furor generated by soaring prices for an EpiPen, a life-saving treatment for the potentially lethal anaphylactic allergic reaction, has made it evident there is a lot of money at stake in the medical treatment of allergies. Taking steps to resolve this problem through diet and lifestyle as much as possible will save you discomfort—and money.

(5) Centers for Disease Control and Prevention, May 2013