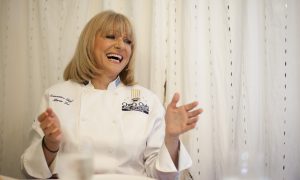 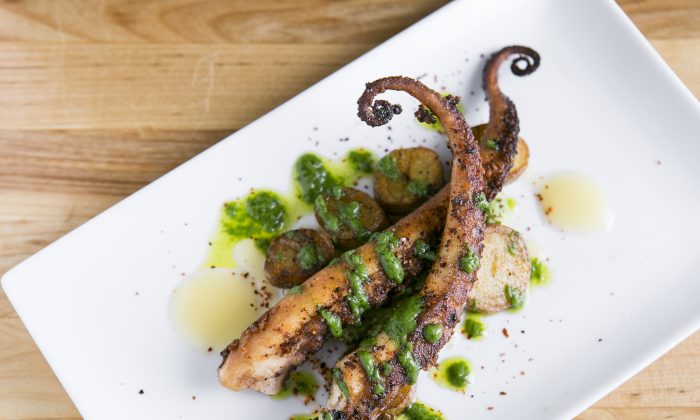 After a week of self-indulgent, celebratory holiday eating, my taste buds called it quits. I’m not one to utter the word “detox” voluntarily, but it came to mind. Even in my dreams I was eating. I didn’t want to look at food anymore.

It took a visit to Cooklyn, a restaurant that opened about six weeks ago in Prospect Heights, Brooklyn, to resuscitate my jaded palate.

The executive chef, Anthony “Theo” Theocaropoulos (with a name “as long as the day,” he said), cuts a tall figure in the open kitchen, creating dishes that have people coming back for more.

Despite the recent opening, the restaurant is already hopping, mostly with locals, and has already developed a following of regulars through word of mouth.

Theocaropoulos was intrigued by a lady (in her 70s, he estimates) who comes in every Wednesday for a bowl of his mussels, served in a chorizo bouillabaisse. He went to talk to her and entreated her, wouldn’t she like to try something else? She responded by bringing the bowl of mussels to her lips and downing the broth.

The youngest of five boys, he grew up in New York with a Greek father who owned five Greek diners.

He’s worked under Mario Batali at Eataly, from whom he learned to become organized. “Eataly cooks at a massive level. Mario taught me to organize and really push,” he said, while he refined his technique under Michael White at Ai Fiori.

“I would go into my dad’s diner [starting at the age of 9], they’d throw me an apron. I remember the controlled chaos atmosphere, my father yelling in Greek—I just loved it. On my mother’s side, we have a pretty big Italian family. Growing up … Feast of Seven Fishes, pasta, meat pies, leftovers for the rest of the month. My whole family revolves around eating,” he said.

What does he remember of his father cooking? “It was soups, soups, and more soups!” he said. “And more soups. And tons of octopus. I remember him doing a goat’s head stew and picking me up to see the pot. The second he took the lid off, the head went … rotated toward me. I started crying. My dad takes the eyeball. He ate it. I was traumatized. [He asked] “You want the other one?” [I said] ‘No!’ I go to my room crying. Like I said, it was always revolving around food.”

Dishes to Return for

I’d return in a heartbeat for the octopus—easily among the best I’ve had ($14). Octopus and potatoes make for a traditional pairing in the Mediterranean repertoire, but the version here is outstanding.

The curled tentacles get a perfect crusty char, while the interior remains incredibly tender and subtly infused by many herbs and spices the chef uses to cook the octopus.

That enough is wonderful, the addition of watercress pesto and Meyer lemon on the side inject a dose of brightness just where needed. Somehow it makes for a perfect dish for winter. It fulfills that yearning for comfort and heartiness while providing a few drops of gustatory sunshine.

Both the smoked potatoes and the warm creamy slices of avocado, underneath the octopus, add a nice creamy contrast to the char.

The Lamb Bun ($5), reminiscent of an Asian pork bun, combines lamb with dill and feta cream to give a delicious juxtaposition of warm and cool, and again hearty and refreshing. That too, I would return for.

More vegetable plates are currently being introduced, including a Beet Salad ($11), with delicate bite-sized golden and ruby beets (a welcome change to the roasted-potato size usually served, which I find too large to truly showcase their sweetness). A boost of vinegar and herbs adds a tangy brightness to the beets and accentuates their sweetness even more. They are served with greens, olives, and a light dressing—all in proportions that had me enjoying every bit of it.

The type of dish used for some of the entrees—a plate with a sort of deeper well—works well in building up these layers and keeping the dish warm. They may look like small portions when they first arrive at the table, but like excavating for an archeological find, there are a few layers to be unearthed.

An ever-so-fragrant Squid Ink Cavatelli is topped with breadcrumbs, but no ordinary breadcrumbs are they. When I asked Theocaropoulos about them later, he said he sautés panko breadcrumbs in the butter used for poaching lobster. Beneath the dark ink pasta, sitting there like just-discovered treasures are scallops, shrimp, and calamari ($16).

For another dish, Theocaropoulos sautés cod till one side develops a beautiful golden crust. Right beneath are potatoes, the size of very large pearls, poached in olive oil. At first, taking bits of the golden crust is enjoyable, as is the moist fish, as are the bite-sized potatoes. And then another discovery as the flakes of cod fall to the bottom of the bowl: a beurre fondue (an emulsion of melted butter) with a watercress purée ($22). Delicious.

My dining companion and I laid waste to the Gianduja Budino, a barely standing-by-itself custard of hazelnut and chocolate, surrounded by bits of hazelnuts and topped with apricot ($10).

Subtler was the Poached Quince, a very pretty tableau of pink and white, between the red-wine poached quince, and the rosemary meringue ($7).

A richer and more indulgent option is the Boston cream pie that gets the Brooklyn treatment. This Brooklyn Crème Pie sports chocolate layers with a creamy caramel filling, topped with cherries, and is enough for two diners, or quite likely, four very full ones ($12).

The restaurant seats 50, including 12 at the marble-topped bar. Wine director Jason Lange offers 35 wine selections that highlight small producers using natural or low-intervention techniques from both the Old and New worlds. Almost all are available by the glass.

The atmosphere is casual and low-key, the setting airy, with reclaimed wood throughout and white walls that will soon display local artists’ work.

Brunch will be served in the near future.

If you wondered about the name, it came from owner and partner Mike Kennedy, who loves puns. He couldn’t believe no one else had thought of it.

On our train ride back, my friend and I spent three-quarters of the ride discussing the merits of the dishes (especially the octopus and lamb buns), and the rest of the discussion was all about the name—was it a little silly, too silly, and so on.

Well, think what you will, it cleverly achieves its final goal. At the end of five minutes of back-and-forth, the name Cooklyn had worked its way into my memory—just like the dishes I had there.