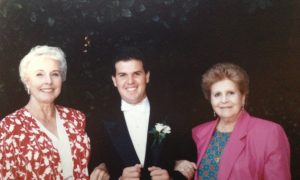 Fathers show us strength, love, and the best way to grill a burger. (Shutterstock)
Chefs

In honor of Father’s Day, chefs reflect on memories made and lessons learned from Dad, in the kitchen and beyond
By Crystal Shi

The majority of my childhood memories involve cooking with my father. The earliest ones are of me running around his restaurant and begging his pizza cook to make me and my brother pizza at all hours of the day.

During college, he needed my help cooking a very special dinner for business associates. We developed a 10-course menu to really blow these guys out of the water. It was a special time that really demonstrated how well we worked together and showcased some of the most delicious food we could create together.

Then, when I became a sous chef at Jean-Georges in New York City, he staged with me in the kitchen for an entire day. It was amazing to have him in the kitchen with me. But the roles were different—I was in charge. I have loved learning from my father and feel fortunate to have inherited his passion and skill for cooking.

There are two very important lessons my father taught me that I carry with me everyday. The first one is the importance of building a team. He understood that kitchens and restaurants are a team effort. No matter how good of a chef I can become, my kitchen wouldn’t produce great food unless I was able to build and inspire a group of people to do it with me. “Make them want to do the job!” he always said. “Empower them, teach them, and support them, and they will follow you forever.”

The second lesson is more specific to cooking: When crafting a dish, make each component taste delicious by itself, and the end result will be the same.

There are two things we would always do to celebrate Father’s Day. First, we would go surfing in the morning. My dad loves surfing with his kids. It seems like his happiest moments are doing what he loves the most with the people he loves most, his family.

Then and now, we always attempt to make dinner without his help. But it’s always a fruitless endeavor because my dad is a bit of a control freak—it’s impossible for him to stay away from the kitchen.

Remembering Days on the Water

My father was not the head chef in our house—my mom was. The one thing he could do was grill. We had burgers, hot dogs, steaks, and chicken, and we would stand around talking and bonding as the food cooked.

But the best BBQs of all were the ones after our father–son fishing trips. Growing up on Long Island, my father and I often went fishing together. After a day on the bay or deep-sea fishing, we would come home and show my mom our catch, then clean the fish in the basement. Then we would fire up the grill and grill fresh fish in the backyard. While cooking, we recounted the highlights of the trip, talking about the one that got away and how big it must have been.

To this day, fresh fish is one of my favorite meals. Each time I cook bluefish, I am transported back to a simpler time in the backyard with my dad.

Don’t step on Mom’s toes in the kitchen, and always be respectful of others. Also, it is not as important that you win or lose, but that you give it your best try.

My dad did not like to make a big deal of Father’s Day. I guess this was the time of year he stocked up on underwear, handkerchiefs, and ties. Of course, there was always a nice card anyway, and a mid-day meal.

I lost my dad in 1997. It would be nice to get to know him today as a person, and not just a father. I know he was a cook in the Navy on an aircraft carrier during World War II. I would like to ask him more about his life and find out more about what his dreams were as a young man.

When I was young, my father and I spent a lot of time on the weekends cooking and hanging out together in the kitchen at our family’s home. During the week, my mother would handle the majority of the home cooking, but on the weekends, my father and I loved to take over the kitchen. My father was known for making amazing breakfast feasts that would often hold everyone over until dinner time! It was during these times, and with my father’s influence, that I developed my own passion for cooking and hospitality.

One thing I am grateful to have learned from my father is persistence. I relate this back to when he first taught me how to make a proper curry, which requires patience, determination, and a long process of slowly layering and building a depth of flavor that cannot be simplified or expedited.

In the kitchen and in life, we are constantly faced with obstacles and challenges that make our goals seem further out of reach. My father’s lessons have helped me remember to remain persistent in whatever I am working on, regardless of the challenges or obstacles.

Our tradition for Father’s Day has always been dinner out with the family—Dad’s choice of restaurant, obviously!

Every year, my dad gives out homemade pepper jelly to friends and family. It is delicious pepper jelly! He even grows his own peppers for it. Watching him go through the methodical process of making the jelly, then seeing the joy it brings him when giving it out is one of my fondest memories of him in the kitchen.

Many moons ago, after having recently finished college with a degree in biology and philosophy, having taken the MCAT for medical school, and having gone on an interview for medical school, I walked into my parents’ kitchen to tell them I was going to culinary school instead. My dad’s answer was: “Pursue food like you would medicine!” The advice has stuck with me ever since. I still pursue cooking with the same drive, intensity, study habits, and vigor.

With the exception of Father’s Day 2005, the day my son Cullen was born, Father’s Day is a fairly simple affair. It usually involves a nice glass of whiskey with my dad, and some meat on the grill.

If my father was grilling, no matter the item, there would always be a foil packet with sweet onion and butter on the grate. To this day, I seem to find myself doing the same—I just happen to also finish those onions with a splash of vinegar and some coarse salt. Reflecting on this simple item we enjoyed as a family, I now recognize a key element of grilling: Keep it simple, not fussy, because that is when it becomes harder to manage.

My dad’s cooking was always simple and consumed in moderation—two things that I carry with me today both in and out of the kitchen. If we had hamburgers, they consisted of quality beef, salt, pepper, and maybe some chives from the garden. If you start with strong building blocks, you shouldn’t need much more. My dad never chased the excess, and still doesn’t—something that I try to replicate for my own kids.

Father’s Day has two underlying themes on both my side and my wife’s: fishing and food. We either start with fishing and end with food, or vice versa. Now that I am a father myself, the day is more about my own dad than ever before, because I now can truly understand what being a father is all about.

Some of my favorite food memories with my dad are of sitting around a fire when he would take me camping as a kid. Sometimes it would just be the two of us, and other times my sister was there, too, giving Mom a break at home.

It was always magical “cooking” on a fire as a young boy. It was simple: hot dogs on a stick, baked beans in a pot, s’mores for dessert. Everything somehow tasted better than the same food made at home.

My dad is a pastor, so every Sunday morning and Wednesday night I would be at church listening to him give sermons to the congregation. Sometimes he spoke directly to me or about me (we later worked out a deal that he needed to pay me $1 every time he wanted to talk about me) and many of those lessons have carried into my adult life.

The one that stuck with me most is the Golden Rule: Treat others as you want to be treated. I find that leading a kitchen with respect for everyone is infectious, and creates an environment where people enjoy coming to work, which affects the way the food looks and tastes. Food made with love somehow tastes better.

My childhood memories of Father’s Day are of going to church on warm, early summer mornings, followed by grilling burgers covered in American cheese—which always ended up well-done—and bratwurst that spit out grease as they took on the heat from the grill.

Now that I’m a father myself, I don’t get to spend the day with my dad, as we live in different states, but I do have a family tradition of going to my sister and brother-in-law’s house with the rest of my family and friends.

One of the more memorable Father’s Days spent at their house happened a couple years ago, when we decided it would be a good idea (not to mention very dad-like and manly) for us to smoke pig heads overnight for everyone to enjoy the next day. My brother, brother-in-law, and I tended the embers all night while playing cards, scheming up plans for the summer and maybe having a beer or two.

When the sun came up, we had just laid down for about an hour when our three boys woke us up wanting breakfast. They proceeded to share that, during the night, they had come up with a scheme of their own: A zip-line in the yard.

It was time for us to be dads again, so we all headed to Lowes, bought materials, and erected a zip-line between two trees in the front yard that ended up drawing all the neighborhood kids to the party. Amazingly, everyone survived the day and, despite a few gross looks, enjoyed the pig heads.

Happy Father’s Day to all you dads out there, who are probably building unsafe things for your kids to play on and grilling out to make memories for all your sons and daughters.

Interviews have been edited for clarity and brevity.