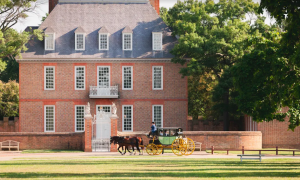 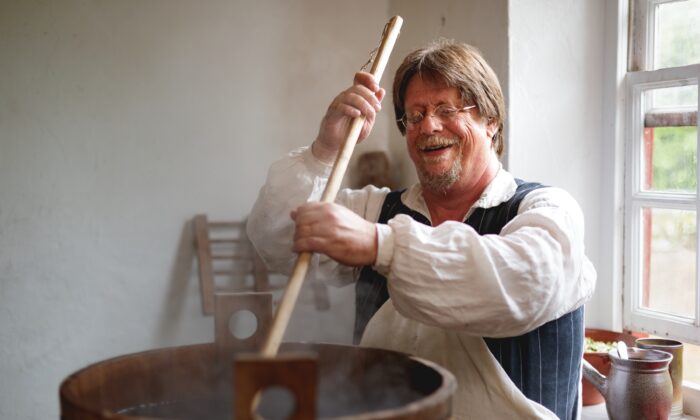 Cooking up a Taste of American History With Frank Clark

In the kitchens of Colonial Williamsburg, Clark and his dedicated staff are keeping our young nation's culinary history alive
By Alexandra Greeley

As a young kitchen apprentice at Colonial Williamsburg, Virginia, Frank Clark faced a challenging task. To demonstrate his skills, he had to prepare a three-course meal for eight guests at the Governor’s Palace.

The guests enjoyed the feast, and Clark passed the test.

A native of Williamsburg, Clark has been working full-time at Colonial Williamsburg—a historic, 301-acre living history museum—since 1988. His mother had worked as a trainer there for 30 years, and he started when he was a college student. By chance, when he was leading school tours one summer, management moved him to the kitchen to help out.

“After working there for two summers, a full-time job came up, and I became an Historic Foodways apprentice,” he said.

Today, as the site’s master of Historic Foodways, he researches, cooks, and displays colonial recipes to keep our nation’s culinary history alive.

When Clark started his kitchen work, the cookbooks of the 18th century were his primary resource. “I read them and was fascinated by them,” he said. He started researching all that existed in printed cookbooks from the period, often going to all the local libraries to find them. “Now the internet has helped me and other food historians. I can just look online,” he said.

“The key to reading the 18th-century text is knowing that it is all set out in paragraphs,” he said. Reading a recipe was like reading a story, not just a list of ingredients and instructions. He learned to follow the language of the time. For example, a piece of butter might be measured as “the size of a hen’s egg, or a walnut, or a nutmeg.” Some writers were better than others, he noted. Sometimes crucial details were left out, and he and his staff would have four different interpretations of the same recipe.

Despite the challenges of interpretation, the cookbooks provided valuable insights into how early Virginians cooked, ate, and lived. “Learning how people eat tells about their religion, society, and quirks of life,” Clark said. “Primarily, pork and corn were the markers of early American diets.”

Clark noted that Virginians are known even today for their salted pork. They also ate different animal parts, including offal, for which many recipes existed—such as one for a whole barrel of pickled beef tongues. He described another recipe for pickled asparagus, which called for dipping bundled asparagus held by their roots into boiling water, then placing the bundle into a mix of basically vinegar and salt. “These are recipes you don’t see in a Betty Crocker cookbook,” he said.

He considers the recipes to be a way to teach today’s people about how much healthier the 18th-century traditional diet was, because there were no modern-day processed foods.

“We were governed by seasonality in this period, and most of our food came from a 20-mile radius around town,” Clark said. In Williamsburg, few—if any—households were self-sufficient, so people relied on the market. “The supplies in the market were provided by the many small farmers and households that surrounded the town. There is also lots of evidence that free and enslaved African Americans provided much of the seafood and poultry [there].”

Clark also noted that the area was “part of one of the largest trade empires the world had ever seen.” Imported goods from other British colonies, from Indian spices to Jamaican sugar and rum, were “available to all who could afford them.”

Meals weren’t comparable between people of differing economic status. For the wealthy, it was all about offering as many choices as possible, and they would employ several skilled cooks who could prepare decorative foods and table settings. Meals at the Governor’s Palace were lengthy, bountiful feasts, with multiple dishes at each course.

When the middle class entertained, “they would try to offer choices like the wealthy, but they would not have as much food nor as many choices, and would probably not have much in the way of decorations,” Clark said. Families in poorer households might have used salted pork to flavor other ingredients.

Of course, times have changed. But to keep the culinary history alive, Colonial Williamsburg maintains two still-operating kitchens: at the Governor’s Palace for formal meals and at the James Anderson Armory for more casual meals.

Dressed in colonial garb, Clark and his staff prepare meals in these kitchens at least four days per week, setting out four or five different dishes using 18th-century recipes. “The cookbooks are a wonderful resource. We cannot dig up a 200-year-old pie, but [we] can make it again by using the recipes in the cookbooks,” he said.

While visitors aren’t able to taste the displayed dishes, they can dine at several onsite taverns and other eateries. Clark consults with the chefs there, especially with the goal of getting 18th-century foods into the taverns. He’s pleased that they’ve captured the essence of early American cooking.

Although he’s not a trained chef, Clark treasures his cooking life: “This is the best cooking job on earth. I get the joy of cooking without the stress of a restaurant grind. … I can take my time and enjoy talking to our guests as I go.”

He has also embraced what he learned on the job. “It has given me skill sets I never thought I would have—I can butcher a cow, salt meat, and bake bread,” he said. “It has built up my understanding of where we are from, and what is the process to go through before we can cook and eat.”

Alexandra Greeley is a writer and editor with more than 20 years of experience. Her work has appeared in the National Catholic Register, the Vegetarian Times, and others. She has written 36 cookbooks.