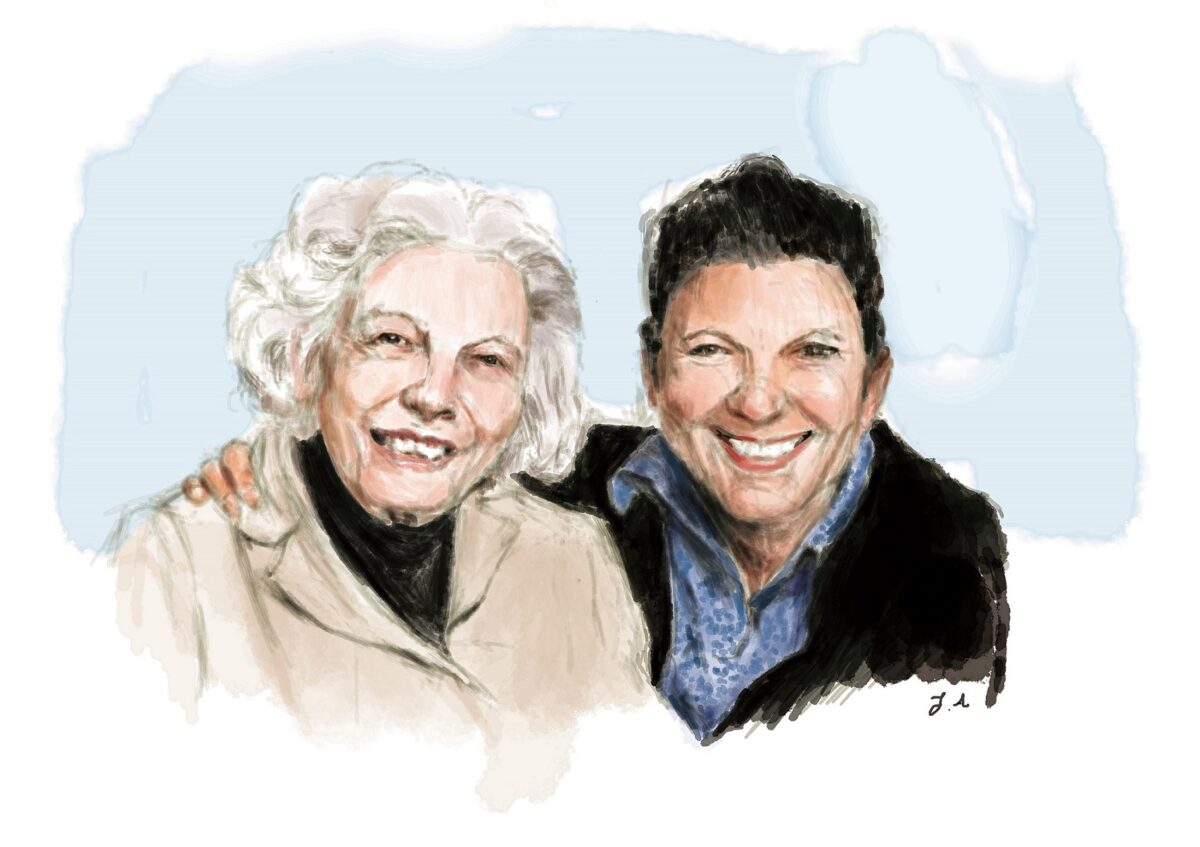 The author and her mother. (Jens Almroth/The Epoch Times)
Food

Cooking for Mum, Coming Full Circle: How My Mother’s Dementia Pushed Me to Learn to Cook the Foods of My Heritage

My beautiful 91-year-old mother stood in the kitchen staring at the onion in her hand, not knowing what to do with it. She was a few years into living with dementia and had recently started divesting all she wouldn’t need in the next life. Reading, writing, knitting, her favorite TV programs, conversations with friends—all had gone. On that day, her encroaching incapacity also claimed cooking.

Providing had been so essential to my mother’s mothering that both she and I lost much that day. I could barely see her through my tears as the realization that she could no longer care for herself, let alone me, hit home.

My mum’s meals had nurtured me throughout my life. She had produced them in abundance when I thoughtlessly brought friends home for dinner unexpectedly, and she had left them in my apartment to entice me to eat after my partner died, and again when I was recovering from cancer. I had looked forward to them when I came home from school, from university, from work. When I popped in for lunch on Saturdays, I always found my favorite food—lentils—waiting for me. The Greeks have a way of cooking it with rice and fried onions that elevates that humble pulse into something utterly delicious. My mum’s was the best of the best.

Food is memory. More than music or books, it has the power to transport us to a different time and place. A Greek pastry called tahinopita, for instance, reunites me with my 5-year-old self and my bapou—my grandfather—who always bought me one when I visited. Cypriot potatoes, roasted with bay leaves and oregano, remind me of my yiayia—my granny.

Countering these are the unpleasant recollections of school dinners. To this day, I only have to stand in front of the instant foods shelf in the supermarket to feel that cold dollop of instant mash sitting unswallowable on my tongue; the sodden, aluminum-flavored peas; and the nausea and snotty tears they induced when I was made to eat them.

This inextricable link between food and memory can be traced to survival needs, writes anthropologist John S. Allen, author of “The Omnivorous Mind: Our Evolving Relationship with Food.”

“Finding food is so important to survival that the hippocampus is primed to form memories about and around food.” In other words, to survive, our ancestors had to memorize where the best hunting ground—and therefore the best source of food—was, thereby creating a neural pathway that would forever bind together memory and sustenance.

The connection is so powerful that it even has a name: the Proust phenomenon, named after the writer Marcel Proust, who, in his book “À La Recherche du Temps Perdu” (“In Search of Lost Time”) described how the scent and taste of a tea-soaked madeleine cake took the narrator back to the past.

Lorrie Forsyth, a clinical psychologist at Maggie’s, a cancer charity that provides free support and advice to people with cancer and their families in the UK, Tokyo, Barcelona, and Hong Kong, said our food memories are so transportive because they run deep along multiple channels. “Eating is multi-sensory. It stimulates all our senses—taste, smell, sight, touch, and hearing—and so cements and then triggers recollections on every level.”

This realization recently led me to take a new approach to caring for my mother: The meals I made her needed to awaken not only her tiny appetite but also her memories of precious times. Despite being well into middle age, I had never explored the rich heritage of Greek cuisine. For years, I had felt life was too short to stuff a vine leaf to make dolmades. Now, with my mum approaching the finishing line, I realized it was too short not to.

On a recent work trip to Greece, I therefore booked some lessons with Vasilis Moschotas, the head chef at the gastronomy-led MarBella Elix, a five-star hotel in the olive-rich region of Epirus.

My intention had been to learn to make my mum’s favorites: dolmades, vine leaves stuffed with mincemeat and rice; kioftedes, meatballs flavored with herbs and spices; and pastichio, an oven-baked macaroni dish smothered in full-fat, cheesy béchamel. Ahead of my visit, I emailed my ambitious menu plans, but when we met, Moschotas asked about my mother’s eating habits. Talking about what and how she ate, I saw that I had already left it too late—all but the simplest foods had become indigestible, and her worn-out taste buds could only pick up the basics—salt, sweet, sour, and bitter foods.

And so, Moschotas and I settled on two pastries, one salty, one sweet. First, there was spanakopita, filled with feta and spinach, and then sweet, nutty, syrupy baklava. Back in London, I have made both for my mum. By far and away the most rewarding aspect of my attempts is that each one is an exercise in love. My mum sits in the kitchen as I bustle about, watching me, as I once watched her.

As Forsyth said, “Food evokes feelings of belonging, of being part of something—be that a family, a celebration, a friendship, a relationship—and awakens recollections that are incredibly powerful and vivid. It is a vehicle that takes us back to the time when that association was made. Often those memories will be ones we cherish, and can derive comfort from.”

My mother and I have come full circle. The nurturer is now the nurtured; the parent is the child; the child the parent. The same plates, the same food, the same stories she once told me to coax me to eat, now come from me. I’m still creating food memories, but now they are only for me. In times to come, when my mother is no longer with me, I hope I will be able to draw sustenance from them.

The writer’s stay at the MarBella Elix was hosted by the hotel and Olympic Holidays.

How can a dish with so few ingredients lend itself to such variation in taste and texture? Because no two people make this Cypriot staple in quite the same way. I use a lot more onion than many recipes allow, and also cook my lentils for longer, but have reduced both here to bring the recipe more into line with others.

Feel free to experiment. Some people like to add a bay leaf, cumin, or lemon juice. Creating your own version is part of the fun.

Give the lentils a quick wash, and then boil in a pot of water for 10 minutes. Strain, add enough fresh water just to cover the lentils, and bring to a boil again.

Once boiling, add the rice, lower the heat, and cook for 15 minutes, or until the rice is soft. Don’t let your pan run dry—keep topping up with a little water if needed, but don’t overdo it.

In the meantime, fry your onions in the olive oil until they are golden brown.

When the rice and lentils are cooked, add the onions, mix well, season to taste, and serve.