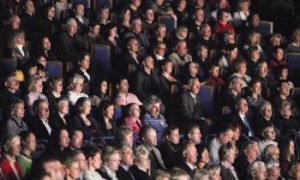 Physician: 'It went directly into my heart'
0 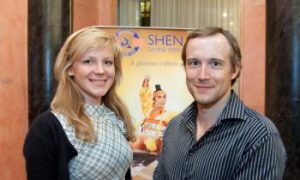 Financial consultant: 'The show is spectacular'
0 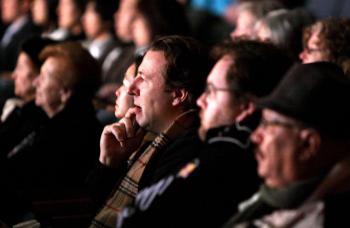 Shen Yun Performing Arts played to a captivated audience at its Saturday matinee on Jan. 15, 2011, at Sony Centre for the Performing Arts. (The Epoch Times)
Arts & Culture

By Matthew Little
Print
TORONTO—Conductors are used to telling people what to do and exacting perfection from their charges. No doubt they demand the same of their peers.

On Saturday, respected Toronto conductor Colin Clarke attended Shen Yun Performing Arts at Sony Centre and left with unreserved praise for the performance of his peer that afternoon.

“I thought the conductor was fantastic and the orchestra was wonderful,” he said.

Mr. Clarke said there is a challenge to conducting an orchestra and keeping it in time with dancers on stage.

“You have organic activity with the musicians who are following the conductor who in turn is watching the performance on stage. So to get a 30- to 40-piece orchestra to time their performance with the dancers who are moving at different times is a difficult task, but I think they did very well with it,” he said.

“I would love to see them again, I thought it was really good … I thought the orchestra was extraordinary.”

Toronto is a city of the arts with some of the finest musicians in the world, including among young people. Clarke is founder and artistic director of the Toronto Youth Wind Orchestra, an ensemble of some of the city’s finest young musicians. Mr. Clarke made his debut at Carnegie Hall in May 2006 with the orchestra, and the group will be returning to the prestigious theatre this May.

He founded the Toronto Youth Wind Orchestra when he was still in high school and since then has received the Clifford Evans Award for Conducting at the University of Western Ontario and studied further at the University of North Texans and Manhattan School of Music in New York.

Mr. Clarke has conducted many all-city bands, orchestras, and choirs across Ontario, and has led the Provincial Honour Bands of Ontario, Quebec, and Prince Edward Island. In May 2008 he was selected to serve as conductor of the National Youth Band of Canada.

But even with all of that, he said Shen Yun was a new experience for him.

“I very much enjoyed it as well, I had a good time. I have not had much experience with Chinese dance but the precision and the artistry is something that was worth coming to.”

“I thought it was wonderful. It was really visually stunning. It was absolutely amazing,” she said.

“The colour, as Colin said, the precision of the dancers, it was just really polished, a wonderful performance.”

For her husband, part of the joy of the day was the discovery of another culture’s musical traditions.

“Being exposed to Chinese classical instruments was just thrilling. I very much enjoyed that, wish I could see more of that actually. It was a lot of fun,” he said.

Shen Yun’s two hosts introduce each of the dances with some context and, at times, humour. Clarke said one bit was amusing where the pair try to introduce the next act only to get interrupted by musicians in the orchestra pit looking for some attention.

“I thought that was hilarious. I laughed out loud for that one, it was fun.”

He said Shen Yun’s well-rounded performance made it work well for a diverse audience.

“It is nice to expose them to Chinese culture. You have the marriage of dance and music and a little bit of comedy, some performing arts from the vocalists, there was the two tenors and the soprano. I think this would work very well for people of all ages. Absolutely.”