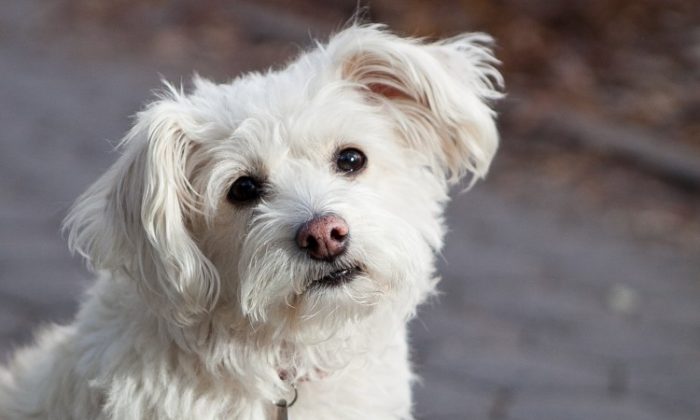 Unah, a New York City local who loves chasing squirrels but strongly dislikes skateboarders. The New York-based program Pet Food Stamps has attracted some contempt, but the ASPCA stated that the program will help ease shelter capacity constraints and have an uplifting effect on pets in financially distressed homes. (Amal Chen/The Epoch Times)
Good to Know

Foods that are safe for people can cause pets serious harm. Examples include garlic, avocados, grapes, macadamia nuts, and xylitol (a popular sweetener in sugar-free gum).

The Chicago Veterinary Emergency and Specialty Center sees pets poisoned by people-food every week. Dr. Jerry Klein, supervising veterinarian at the center, says that many pets require hospitalization for eating things you might not expect they would want.

“Few dogs go after coffee, but what they will eat are chocolate-covered espresso beans. That has the one-two punch of the dark chocolate and caffeine.” Klein said.

According to Klein, who has worked in emergency vet medicine for over 33 years, many pet owners have no idea how much damage certain people-foods can cause, or how much supervision some pets require to keep them away from it.

“Dogs are notorious for getting into the garbage,” he said.

Cats are a different story. Many of the things that make a dog sick would make a cat sick too. However, unlike a dog, felines are not likely to bust into the Halloween candy. But they do like eating house plants, and eating a lily can cause a cat serious damage.

If a cat ingests any part of a lily—petal, stamen, or leaf—it will start to develop crystalline particles in the kidneys, which can soon lead to kidney failure. If it isn’t addressed quickly, lily-munching can turn fatal.

“If you have a cat that has ingested part of a lily, and it’s not attended to properly, and it gets to a stage where it’s no longer able to produce urine, the prognosis is grave,” Klein said.

Chocolate is a notorious pet no-no, but it isn’t nearly as toxic as grapes or lilies, which only take a little to cause very serious harm.

“Chocolate is very dose-dependent,” Klein said. “So a Great Dane eating a Hershey’s kiss, for example, should not require any care. But a small dog getting into a bag of semi-sweet chocolate, Frango mints, or other candies that are around during the holidays—those do require hospitalization.”

On a walk or in your home, pets can come into contact with chemicals in their environment. For example, inside your garage may sit a tempting puddle of antifreeze—a highly toxic chemical with a deceptively sweet taste.

Rodenticides are another concern. In multi-unit buildings the landlord may spread poison that is meant for rodents but can inadvertently harm cats and dogs. Pet owners should be aware of where the poison is located and what kind it is.

Rodenticides kill in different ways. Some are designed to cause internal bleeding. In others, animals develop brain swelling and seizures.

According to Klein, animals that ingest the internal bleeding poison are actually easier to treat because an antidote can be given in two to four days. There is no antidote for the brain-swelling poison, which can lead to a painful death if it isn’t caught early.

What to Do in Case of Poisoning

Have a plan in place in case your pet eats something it shouldn’t. If disaster strikes, consider what your pet ate, how much, and the time that has passed since ingestion.

These are some of the details pet owners should have in mind when they call the Animal Poison Control hotline—the first step in confronting a pet-poisoning event. The service, run by the American Society for the Prevention of Cruelty to Animals (ASPCA), provides toxicology consultations to pet owners over the phone.

Wearable Tech Isn’t Just for Humans – Dogs, Cats and Chickens Are Sporting It Too

The next step in addressing a pet poisoning is often decontamination. This involves induced vomiting to get the toxic substance out of the pet’s system.

To minimize damage, act quickly. For example, if a dog consumes ibuprofen or Aleve tablets, which break down very rapidly, the medication may be completely absorbed by the time you make the dog to your vet’s office.

Be sure to have hydrogen peroxide and a turkey baster on hand, so you can do a decontamination procedure yourself at home. Animal Poison Control will walk you through the process. Afterward, make an appointment with your vet for additional care if necessary.

Lists of pet poisons and safety tips are available at the ASPCA Animal Poison Control website at ASPCA.org.