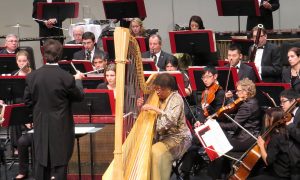 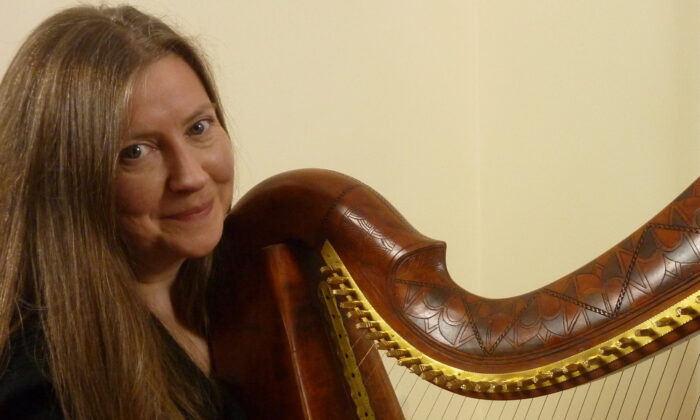 Musician Sylvia Crawford specializes in playing the early Irish harp, which unlike the modern harp has metal strings and no mechanisms. (Simon Chadwick)
Performing Arts

One of the most enduring of sounds, synonymous with the Emerald Isle, is that of the dulcet Irish harp. But the Irish harp that many of us are familiar with is a relatively modern instrument. Prior to the late 19th century, Ireland had a rich tradition of making and playing a different kind of harp, which is now referred to as the early, or old Irish harp.

The new type of harp that came to Ireland was based on the Anglo-continental harp tradition, musician Sylvia Crawford said on a video call. Eventually, as the old Irish harp makers and harpers—the term used to describe the old harp players—passed away, the knowledge of the early harp tradition went with them.

Crawford is one of a number of early Irish music experts and enthusiasts who are reviving the old Irish harp tradition. In 2019, she completed her master’s in ethnomusicology, specifically focusing on 18th-century Irish harper Patrick Quin.

“My aim is to look at what the evidence is about the old tradition. … But also to bear in mind that it was traditional music, so to respect that, and bear in mind [that] this would’ve been an unwritten music and an oral tradition transmitted from master to pupil,” Crawford said.

With the last of the old harpers having passed away and the traditional teaching from master to pupil therefore unavailable, Crawford had to look to many historic sources to understand and reconstruct the tradition. It’s an ongoing process that she likens to painstakingly constructing a 1,000-piece jigsaw puzzle without a picture.

Crawford first remembers seeing harps in her neighborhood in Portadown, Northern Ireland, when she was 6 or 7 years old. It was in the 1970s. One day, while playing in the street, she saw her neighbors taking harps from their car into their house. “That was my first encounter with harps, and in fact one of the men in that family was a harp maker,” she said.

Many years later, she came across the same family, not on her street but in a video from the RTE (Ireland’s national public service media) archives, when she was studying for her master’s degree. “Inside the house was a room full of young pupils who were learning to play the harp: There was a lot of brown and orange … [It was] very 1970s,” she said.

It was in the late 1990s that Crawford heard the old Irish harp for the first time, in Galway on the west coast of Ireland. Master harper Paul Dooley was playing the tune.

“He was a wonderful, wonderful player. … And I heard this sound, and I saw him sitting just quietly playing on the street busking; that was very common in Galway in those days. There was something about the sound of that, I thought: This is different; this is a different sound than I’ve heard before,” she said.

The early Irish harp is a diatonic instrument with no mechanisms (levels or pedals) for changing the pitch. And apart from the metal strings, it is basically made of three parts: the sound box, the neck, and the pillar. The harp is held together by the tension of the metal strings. There’s no glue holding it together. In the old Irish harps, the sound box was carved out of one piece of wood, traditionally willow.

“There’s a lot of strain on the construction, and you can see a lot of the old harps have big iron rods around them holding them together where they’ve likely burst open from the middle because of the tension of the strings,” Crawford said.

In 2006, Crawford bought her first early Irish harp. She thought playing it wouldn’t be that different from playing the piano. She was wrong. She soon realized that the unique nature of the instrument made it challenging to play. When one of the metal strings is plucked, it rings and doesn’t stop, so when the next string is plucked, the two strings ring together. If a third string is plucked, then there’s a clash, she explained. “This is much more challenging than it appears because I have to learn to control this resonance,” she said.

Crawford discovered some harpers who tried to play by borrowing from historical harp technique and others who were adapting modern harp technique.

Although she learned to play the instrument from several people, she felt something was not quite right. “I was playing these old laments and old Irish airs on an old instrument … but to me, it was outside of the world of traditional music,” she said.

One technique Crawford used when starting to learn was to color code the strings to see what she was doing. But she soon realized that the old harpers wouldn’t have played the instrument that way; in fact, many of them were blind. And the harp itself doesn’t have any visual clues as to where the harper is in the instrument when playing, she explained. One particular note has two strings, so harpers could only orientate themselves by sound.

As an experienced fiddler, she knew that one of the things that makes the fiddle sound Irish is the bowing technique. There are many different styles and regional differences, Crawford explained, but the bowing—where it slurs into the beat—is one of the real distinctive features of the Irish fiddle sound.

Crawford was already familiar with the work of Bunting. But she “met” Quin around six or seven years ago at the “Summer School of the Early Irish Harp” run by The Historical Harp Society of Ireland, in Kilkenny, southeast Ireland. It’s an annual event devoted to the early Irish harp.

During one presentation, there was a slide that showed Bunting’s handwritten piano arrangement of a tune he’d collected from Quin, which is now held at Queen’s University Belfast.

The university has a collection of Bunting’s notebooks from when he visited the old harpers and recorded their music at the end of the 18th century. Crawford says it’s important to note that when Bunting was collecting this music, he was outside of the Irish music tradition: He didn’t play the harp. He wasn’t a Gaelic speaker. Bunting’s purpose was not to preserve the harp tradition but to record the tunes before the last of the harpers died.

At the bottom of this particular slide, Crawford noticed a note that said something like Patrick Quin, County Armagh, near the Blue Stone. “I thought, ‘I know exactly where he’s talking about,’” she said. Crawford had grown up in that very area on a road called the Drumnacanvy Road, which led to the Bluestone Road.

Suddenly, Crawford could imagine Bunting sitting down beside Quin, in one of the old cottages along that road—Bunting with his notebook and Quin playing his tune. “It suddenly came to life in my imagination. But I also thought, ‘Nobody else knows where the Blue Stone is. I know because it was up my road. He’s my harper. I need to focus on him,’” she said.

Although there was some research on Quin, there wasn’t that much known about him, she said.

The more Crawford found out about Quin, the more she realized how her life, although centuries apart from his, mirrored aspects of his life. For example, Quin lived in Portadown in County Armagh, where Crawford grew up; both of them played the fiddle, and of course both had the harp in common.

Crawford was living in Brittany, France, at the time, but she decided to move back home to County Armagh, to focus on finding out as much as she could about Quin.

Learning From a Past Master

Quin “was a real master of his art. One person described how ‘he threw his fingers across the strings with all the ability of a master,’” Crawford said.

Delving deeper into her research, Crawford discovered that Quin was associated with the Fews, an area in South Armagh with a strong literary and poetic tradition. “So no longer was Patrick Quin just a harper from Portadown. He was connected to this really important Gaelic literary and musical culture,” she said.

Among the tunes Bunting collected from Quin were three of the first tunes traditionally taught to young harpers. Bunting collected versions of those particular tunes from various harpers, but Patrick Quin was the only harper source for all three tunes. From the point of view of trying to reconstruct a musical tradition, having that information was wonderful, Crawford said.

She also discovered an oil painting of Quin in a private collection; it was unknown before. In the painting, Quin is vividly depicted playing the Castle Otway harp that is now owned by Trinity College Dublin.

By closely looking at the painting, she could see how Quin was seated quite low, and that he rested the Castle Otway harp on his left shoulder. The modern harp rests on the right shoulder. She could also see that he held the harp between his legs and how he steadied it with his knees.

What fascinated her the most in the painting was Quin’s fingers. “You can see his left hand’s fingers up on the strings and his right hand low in that left-high, right-low position that old harpers played. But you could see more information than that; you could see exactly the shape of his fingers on the strings. And you could see his bass hand in this sort of spread-out shape with his fourth finger extended,” she said.

At the time, Crawford had a simplified copy of the Castle Otway harp on loan from The Historical Harp Society of Ireland. She was aware that the painting was not a reliable source because of its static nature and because the artist could have used artistic license. However, she combined what she found from the painting with information from a chapter in one of Bunting’s publications (1840). When writing about how the harpers played, Bunting included a table of tune fragments and showed exactly which fingers were used in each fragment.

As Crawford played the harp by relying on these discoveries, her fingers flowed into what Bunting’s fragments described.

As she read about oral traditions, she saw what Bunting had written about playing techniques, which he had collected from the harpers, in a different light. “I started to realize that he’d given us a lot of this information.” But because he did not play the harp himself—he was an organist, pianist, and arranger—his published work had to be interpreted to be fully understood, and then reconstructed or pieced together.

Crawford stresses that there’s a lot more still to be discovered about the early Irish harp. And each discovery is the result of experts working together on one another’s research. Ultimately, Crawford feels a sense of responsibility to share what she’s found. “Any insights that I have, I really do want other people to build on those in the future,” she said.

She’s currently writing a book about the first tunes taught and the playing techniques of the early Irish harp, explaining how she came to her conclusions and the importance of interpreting what Bunting wrote. She especially wants to draw attention to his work because “without him we would have no possibility” of doing research and understanding the early Irish harp.

To find out more about Sylvia Crawford and the old Irish harp, visit SylviaCrawford.net

In celebration of St. Patrick’s Day, March 17, the organizers of the Remembering Bunting Festival, held in February, have extended online access to the festival, which includes talks and performances from across the world. To access the festival and to learn more about Edward Bunting’s legacy, visit RememberingBuntingFestival.com