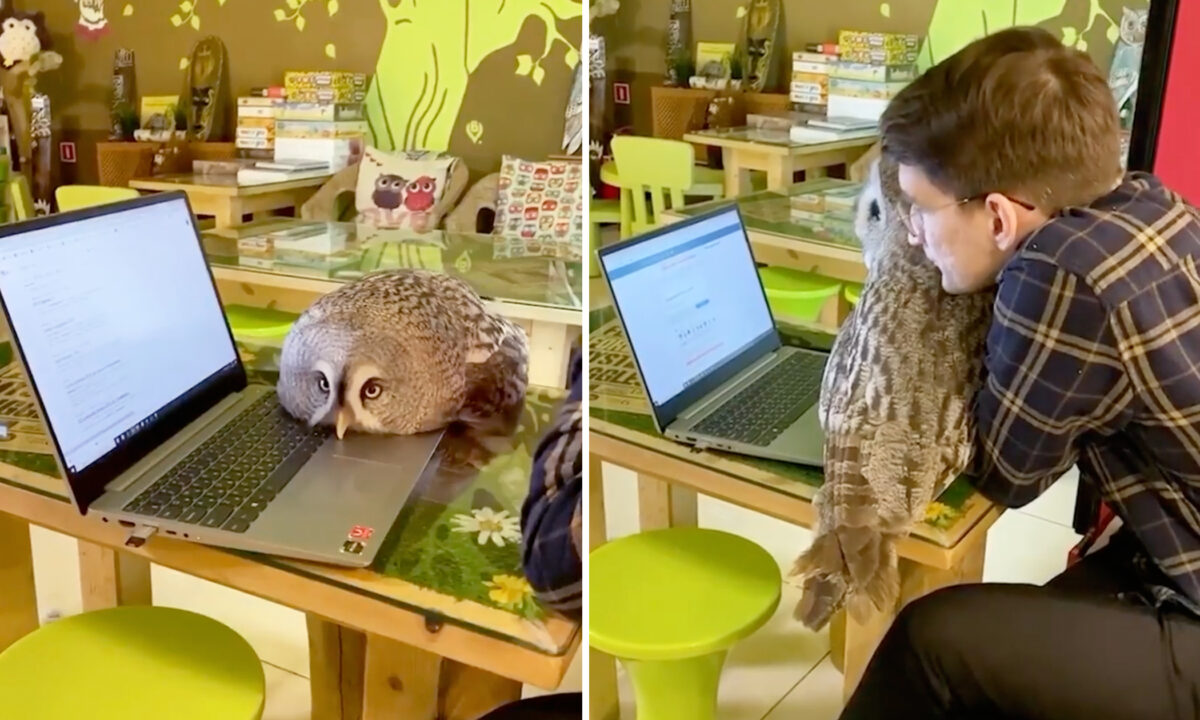 (Courtesy of the Owl House)
Inspired

A Moscow-based owl café is going viral for the adorable hijinks of its seven resident hooting hombres. Between playing with their toys, grooming customers’ hair, and watching their manager at work, the owls rule the roost in this quirky coffeehouse-cum-sanctuary for feathered friends.

Alexey Pshenitsyn, 28, manages the Owl House, an owl-centric café founded in September 2016 after the idea was born. From a small town in the Tomsk region of Siberia originally, Alexey said the main goal of his café is to educate all guests about owls and promote a respectful attitude toward nature.

He told The Epoch Times, “We have seven beautiful owls: common owls Buba and Bulya, snowy owl Sirius, bearded owls Cloud and Myrcella, and long-tailed owls Loki and Luna … each is distinguished by its character.”

One owl in particular, Myrcella, has a thriving social media presence and her own Instagram, @owlmira, with over 3,500 followers. To Alexey’s delight, one video of the cuddly 5-year-old bearded owl went viral, eliciting a massive response from friends, family, and fans.

“She is the most tactile owl,” said Alexey. “From an early age, she was given the most attention and everyone liked her very much.

“In her free time, Myrcella can fly to the sofa pillows and jump on them, trample on them with her feet, grab them, and completely throw them off the sofa. When we put Myrcella on the shoulders of visitors, she can gently grab their hair and brush it out, thereby showing attention and caring. Often, this happens when the guest is a man.”

Other café resident owls have distinct personalities, too.

Common owl Buba, the largest but shyest owl, grows attached to new toys and can “scream in her owl language” if the toy is taken. “But of course, we do not take toys away,” Alexey said. “It is a big plus when owls have physical activity.”

Snowy owl Sirius is the youngest, and will “scream like a seagull” if someone violates his personal space. The quirky bird also insists upon bathing in his basin and hiding his favorite toys.

Alexey said long-tailed owls Loki and Luna are the bullies of the Owl House. They are energetic, love toys, and regularly perch on visitors’ heads and shoulders.

“They are brother and sister,” he said, “but one cannot exclude the possibility that they may have offspring, because for owls, a relative can also be a partner for life.”

All seven Owl House residents were bought from breeding nurseries, have grown up together, and get along well. None were “plucked from the wild,” said Alexey, thus none have ever experienced a wild habitat and may not survive if released.

But Alexey and his staff draw the line at overly domesticating their flock.

“We do not train owls, because training exploits hunger; until the owl does something, it will not get food,” he said. “This, of course, is not what we are about. Our owls move freely around the establishment, fly over the guests, swim, and play with toys.”

While owls are broadly considered nocturnal predators, Owl House owls have a more diurnal routine, sleeping around three to four hours per day. Staff are sensitive to their needs, and even take care of the owls’ physical health in-house by trimming their claws and beaks—something the birds would do for themselves in the wild.

Owl House guests, who pay by the clock during their visit, can observe, stroke gently, and help feed the owls their meals of mice and chicken, an experience Alexey said is “absolutely safe and unforgettable.”

“In our institution, we allow you to stroke the owl on the chest in front, barely touching the plumage, only with the back of the hand—where there is less fat—and having treated the hands with antiseptic,” he said, adding that owls do not enjoy to be stroked; the key is “not to overdo it.”

Alexey said there is no reason to fear the owls. For the feathered friends’ wellbeing, though, visitors are instructed not to scream, jump, run, take flash photos, wave hands, or bring unusual objects into the café. Owls are “not as wise and smart as everyone thinks,” he added, and can be easily startled.