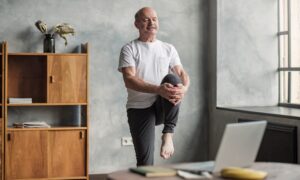 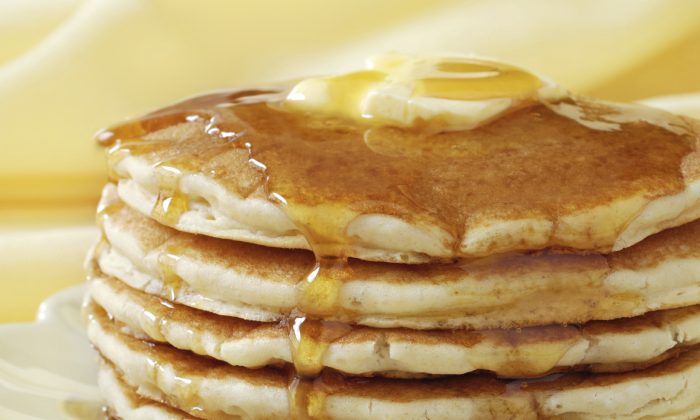 Pancakes are generally one of the worst breakfast foods you can eat… but the recipe below, from MindBodyGreen, is an exception, if you choose to eat breakfast. Made with coconut flour and almond meal, these pancakes are entirely grain-free.

Even better, they contain healthy ingredients like eggs, coconut oil, and grass-fed butter, which means you can indulge without feeling guilty. You can make these pancakes ahead of time and eat them as a snack, too, just be careful with the maple syrup. Either skip it or use just a light drizzle for flavor.

New to Coconut Flour? Why It’s a Healthy Alternative

For starters, coconut flour is 14 percent coconut oil. Around 50 percent of the fat in coconut oil is lauric acid, which your body converts into monolaurin, a monoglyceride that can actually destroy lipid-coated viruses such as HIV and herpes, influenza, measles, gram-negative bacteria, and protozoa such as giardia lamblia.

Coconut oil is also comprised of medium chain fatty acids (MCFAs) that are easily digested and readily cross cell membranes. MCFAs are immediately converted by your liver into energy rather than being stored as fat. This is in part why I recommend coconut oil as an ideal replacement for non-vegetable carbohydrates.

Coconut flour also contains a whopping 58 percent dietary fiber, which is the highest of any flour. For comparison, wheat bran is only 27 percent fiber. Coconut flour is very low in digestible carbohydrates—even lower than some vegetables.

Coconut flour has no gluten either, which is a very good thing. Unfortunately, many people, physicians included, still believe that if you don’t have celiac disease, gluten is fair game and you can eat as much of it as you like.

In reality, gluten sensitivity may actually affect as much as 30 to 40 percent of all people, and according to Dr. Alessio Fasano at Massachusetts General Hospital, virtually all of us are affected to some degree.

This is because we all create something called zonulin in the intestine in response to gluten. This protein, found in wheat, barley, and rye, makes your gut more permeable, which allows proteins to get into your bloodstream that would otherwise have been excluded.

According to Dr. David Perlmutter, much of our current disease burden stems from the fact that we are contaminating our immune systems with proteins to which the human immune system has never, in the history of humankind, been previously exposed to. So a gluten-free flour like coconut flour is an ideal replacement for wheat flour.

How to Cook Using Coconut Flour

What Makes the Eggs in This Recipe So Important

Eggs are an incredible source of high-quality protein and fat—nutrients that many are deficient in. They’re also an excellent source of antioxidants, including lutein and zeaxanthin. However, they serve another important purpose in this recipe – acting as “glue” to hold the pancakes together.

When cooking with coconut flour, baked goods will just fall apart if you substitute it 100 percent for regular flour. However, you can use 100 percent coconut flour if you add eggs. The secret is to add one egg per ounce of coconut flour, on average. Why eggs? Since coconut flour has no gluten, the eggs take its place by helping your ingredients stick together.

Feel Free to Slather on the Butter

This recipe calls for a small amount of butter in the batter, however, you can also smother your pancakes in more for serving. This is actually a far healthier choice than maple syrup.

Refined carbs, sugar, and processed foods are the real enemy—not the saturated fats found in foods such as butter, lard, or eggs. In addition, butter may have both short-term and long-term benefits for your health. One Swedish study found that fat levels in your blood are lower after eating a meal rich in butter than after eating one rich in olive oil, canola oil, or flaxseed oil.

The scientists’ main explanation is that about 20 percent of butterfat consists of short- and medium-chain fatty acids, which are used right away for quick energy and therefore don’t contribute to fat levels in your blood. Therefore, a significant portion of the butter you consume is used immediately for energy—similar to a carbohydrate.

The other oils (olive oil, canola, flax, etc.) contain only long-chain fatty acids. The primary nutrients found in butter are outlined in the table below. As you can see, butter contains a wealth of nutrients, making it a veritable health food.

How to Make Your Own Almond Meal

This recipe calls for almond meal, which you can purchase pre-made or easily make at home. I suggest the latter, because this allows you to choose what type of almonds to use. Many store-bought almond meals are made with blanched almonds, which have the skins removed. However, one of the healthiest aspects of almonds appears to be their skins, as they are rich in antioxidants including phenols, flavonoids, and phenolic acids. In addition to leaving the skins on, you can seek out organic and raw almonds, which have not been irradiated or pasteurized. Be aware that pasteurized almonds sold in North America can still be labeled “raw” even though they’ve been subjected to one of the following pasteurization methods:

There are generally no truly “raw” almonds sold in North America, so don’t be misled. It is possible to purchase raw almonds in the US, but it has to be done very carefully from vendors selling small quantities that have a waiver from the pasteurization requirement. The key is to find a company with the waiver that is not pasteurizing them. Once you’ve selected your almonds, making almond meal is simple. Almond meal is highly perishable and prone to becoming rancid, so it’s best to make only as much as the recipe calls for.

Healthy Toppings for Your Pancakes

Maple syrup is the go-to pancake topping for many, but even though it’s natural, it’s still high in fructose. One tablespoon of maple syrup contains 12 grams of sugar, about 6 grams of which are fructose. I recommend restricting the level of fructose you consume to no more than 25 grams per day if you’re healthy and no more than 15 grams per day if you’re overweight or have a chronic disease like diabetes, heart disease, high blood pressure or cancer. An even healthier option is to forgo the maple syrup altogether and top your healthy coconut almond meal pancakes with butter, a generous sprinkling of cinnamon and/or fresh blueberries and raspberries.