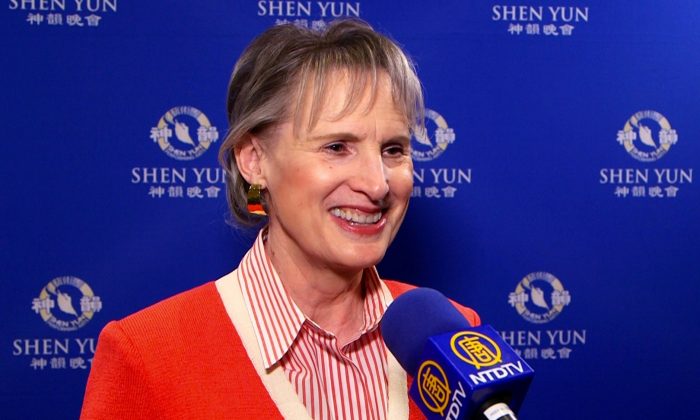 Shen Yun is based in New York and is the world’s premiere classical Chinese dance and music company, dedicated to reviving 5,000 years of divinely inspired Chinese culture.

Ms. Vahl-Gillespie works as a CPA (Certified Public Accountant), but she adores the arts. She spent about nine years in dance training as a child starting at age three, and still takes the occasional dance class today.

She is also one of the original co-founders of the California Philharmonic, and is working on starting a symphony in Malibu.

With a seat in the front row Tuesday night, Ms. Vahl-Gillespie enjoyed being able to view Shen Yun’s full orchestra, with both Eastern and Western instruments, up close.

“The music and the dance just coordinated so well together that it’s just amazing,” she said.

Shen Yun’s dancers are trained in the vastly expressive and independent art form known as classical Chinese dance. China’s deep cultural essence is contained within the dance system, allowing the performers to portray stories and scenes from any period of Chinese history.

“I think their discipline is incredible,” she said. “Their skill level is excellent … They’re all so talented and skilled and disciplined.”

The vivid and colorful scenes from the projected backdrops during each vignette were also very special to Ms. Vahl-Gillespie since she has been to China and recognized some of the locations.

The entire Shen Yun performance was very spiritual and motivational for Ms. Vahl-Gillespie, especially the songs from the bel canto vocal soloists.

“But everything, it’s just kind of the whole mood of it, is spiritual,” she said. “It’s kind of somewhat dream-like. It really is very moving.”

Ms. Vahl-Gillespie was very happy to have Shen Yun performing in Thousand Oaks, so close to her home. She had wanted to come last year, but all the best seats were sold out. This year, she made sure to buy tickets early.

“We’re having a wonderful time,” she gushed. “Really, really enjoying it.”