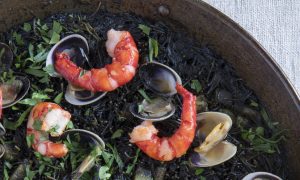 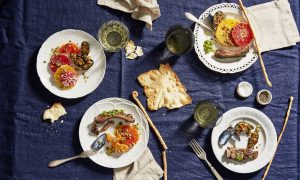 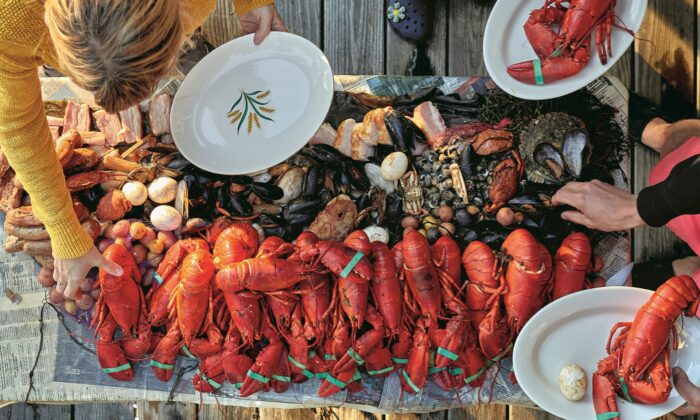 A clambake should be ‘casual, familial, and abundant, focusing on the beauty of nature and breaking bread with loved ones,’ write the authors of the ‘Eventide’ cookbook. (Zack Bowen)
Food & Dining

Classic Clambakes: A Taste of a New England Summer

Cook up an easy version of the seafood feast at home, wherever you are—no beach required
By Crystal Shi
Print

First off, you’ll have to dig a giant pit. On your chosen (and legal) strip of sandy beach, carve out your cooking vessel in the ground and line it with large, thick beach rocks.

Then comes the heat: build a bonfire on those rocks and let it burn down to glowing embers, to get the rocks smoking hot. Once you’ve raked the coals, pack on a bed of wet rockweed, a type of seaweed abundant along the New England coast, that you’ve presumably already spent the morning gathering from the shore.

Next, layer in the main attraction: some mix of lobsters, potatoes, shellfish, and corn, a great mess of fresh seafood and sweet starch, the exact makeup dependent on what’s available around you and what you want to eat.

Finally, pack on another layer of rockweed, cover the whole thing with a giant soaked burlap or canvas tarp, and step away and hope for the best.

This is where the magic happens. To understand that magic, it’s worth noting that a “clambake is really a misnomer,” write Sam Hiersteiner and co-owners Arlin Smith, Andrew Taylor, and Mike Wiley of Eventide, a seafood shack in Portland, Maine, in the restaurant’s new eponymous cookbook. “If it didn’t sound so awkward, a clambake would more accurately be called a clamsteam, because introducing a little moisture to the cooking equation frees shellfish from their shells and produces the most succulent results.”

That moisture comes from the rockweed: As the hot rocks heat the seawater-soaked masses, they’ll create the necessary steam, a bit of smoke, and plenty of ocean brine to coax your raw ingredients into a flavorful feast.

If all goes well, you’ll come back an hour or two later to reveal a pile of smoky, succulent, slow-steamed shellfish, ready to be cracked open, dipped in drawn butter, and messily enjoyed with family and friends.

From Beachside to Backyard

A beloved summertime tradition, the clambake is deeply rooted in the history of New England’s shores. Long before it became a leisurely social affair, coastal Native American tribes, such as the Wampanoag and Wabanaki, used the method to cook the area’s abundant shellfish and other seasonal foods. Wampanoag appanaugs, meaning “seafood cooking” or “clambakes,” were held as part of formal ceremonies to celebrate the season, or honor a member of the tribe.

“It was an ingenious way of steaming the shellfish and the corn, of doing it outdoors … with what you had,” said Rich Vellante, executive chef of Legal Sea Foods and a born-and-bred New Englander. “It is part of our history, our heritage.”

That said, it’s also “quite a bit of work,” he added. It’s a laborious team effort, and from start to finish, it might take “a good eight hours. It takes a lot of preparation beforehand.” And so much can go wrong—the most common being that the rocks didn’t get hot enough, leading to a grand reveal of … a disappointing pile of half-cooked lobsters. (If that’s the case, simply whisk them to the closest kitchen and finish them off on the stovetop, Vellante suggested with a laugh, and no one will be the wiser.)

It’s no surprise, then, that New Englanders have found easier, more accessible ways to pull off a clambake, swapping the beach for backyards and kitchens, and the sandpit for stovetops, ovens, and grills. For those of us farther from the coast, that also means a taste of a New England summer is just a home-cooked meal away.

In a pot on the stovetop, you’ll lose some of that smoky, seaside flavor—and the ceremony and grandeur of it all—but you can imitate the slow steam-cooking method with a gentle heat and longer cooking time, Vellante suggests.

“The slower, longer you cook it at a lower temperature, the better off it’ll be,” he said. “It’ll stay more delicate. The juices will really extract from it the shell of the lobster. The flavors will melt together a little bit more.”

He suggests parboiling your potatoes first, as they’ll take the longest to cook, then dumping all your ingredients into a large pot with your steaming liquid of choice—water, broth, or even a bit of white wine or beer. Cover and cook over a very low heat for 16 to 20 minutes, until your lobster is bright red and your shellfish have all opened.

If you have a steamer basket on hand, advice in “Eventide” suggests building your clambake in there, instead of directly in the pot. The cookbook includes a recipe for an “Efficiency Apartment” version of a clambake, based on how it’s prepared at the restaurant, that uses a bamboo steamer basket set over a wok filled with water as salty as the sea. For added flavor and authenticity points, lay the bottom of the basket with a bed of rockweed, if you can get it—try asking your favorite fishmonger, if you can’t gather it yourself.

And really, any kind of steaming environment would work: a foil packet on an outdoor grill, a roasting pan tightly covered with foil, or even, as Vellante likes to do, a brown paper bag, generously oiled, rolled tight to seal, and cooked in the oven.

Create Your Own Clambake

Part of the beauty of the clambake, whether done in a sandpit, a stockpot, or a paper bag, is that it’s a customizable feast. The exact components can vary depending on regional traditions and personal preferences.

Clams, of course, are a staple, whether soft-shell steamers or hard-shell quahogs. Some form of smoky sausage or cured meat is common, for added flavor. In Fall River or New Bedford, Massachusetts, cities with heavy Portuguese influences, that’s likely linguica or chouriço, while in Maine, you might find the state’s famous red snapper hot dogs.

From there, you might add lobsters (requisite in Maine, less so in Rhode Island, where clams are king), mussels, sometimes potatoes, and “always corn,” Vellante said. “You’re thinking about the bounty of the summertime.”

For your own clambake, wherever you are, the key is getting everything as fresh and local as possible.

Just as crucial is gathering good company to partake in the feast, and, as the authors of “Eventide” write, to “aim for the perfect experience, not perfect cookery.”

Thousands of restaurant, beachside, and home kitchen clambakes later, they’ve concluded that evenly cooked perfection is nearly impossible—but “that’s not the point, anyway. Clambakes are meant to be casual, familial, and abundant, focusing on the beauty of nature and breaking bread with loved ones.”