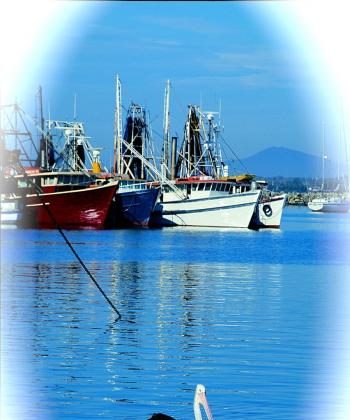 While living in South-East Queensland – beautiful one day, perfect the next – there’s usually no reason to be anywhere else, but one weekend recently we wanted to try out our new GPS (Global Positioning System) and decided to take a trip to the Clarence Valley, situated at the southern end of the idyllic Northern Rivers region of New South Wales.

The Clarence Valley is one of Australia’s largest waterways and one of Australia’s biggest seafood producers. It’s a fishing haven, with pelicans greedily competing with locals for the catch of the day. The Clarence River is the largest river in the system and is the link between the rugged highlands of the upper Clarence and the spectacular beaches of the Pacific Ocean.

It was going to be an eight-hour round trip so we planned an overnight stop at Wynyabbie House near Maclean, an historic Bed and Breakfast built in 1890, nestled on one hectare of lush riverbank land just 10 minutes from the mouth of the mighty Clarence River. A taste of Old World charm was appealing for city dwellers like us.

We programmed all the relevant information into the GPS and set off on a sunny winter’s day. All was going well until we made an unscheduled detour off the highway … The lovely voice on the GPS kept her cool as she continually tried to get us to do a U-turn, to get back on the highway. It took me a few minutes to realise that “take the fourth turn at the roundabout” actually meant do a U-turn! We weren’t going to do that, but our faithful GPS was trying very hard to get us to the destination that we had programmed it for. She stayed polite and unruffled … not like some navigators I know!

All was well again once we were back on the highway, skirting around Brisbane and then reaching the Gold Coast in no time. Once past the Gold Coast, we were about to cross the Queensland/New South Wales border heading south.

There’s always something exciting about crossing a border … you notice the car number plates change colour and usually the scenery is different … you just feel like you are on an adventure … Ok, so the border crossing experience lacked the lustre of travelling through Europe and crossing the border into another country, but hey, we were getting close to Byron Bay and how exciting was that!

Byron Bay is located at the most easterly point on Australia’s mainland and has gained a reputation for having a relaxed and often alternative atmosphere. Being famous for its many spectacular beaches, Cape Byron lighthouse, unspoiled hinterland and nearby world heritage-listed national parks, it has become a world-renowned place to visit … and here we were!

It seemed that a new roundabout had recently been erected just before reaching the town centre; one that our GPS didn’t know about and we ended up at a dead end when we should have been entering the main street of Byron Bay … isn’t technology supposed to make life easier?

There wasn’t a lot of time to spend in Byron Bay as we still had a way to go to our destination. We hadn’t wanted to travel along the highway all the way, so we had programmed the GPS to “take alternate route” and we were about to find out what that meant!

We drove along country roads alongside a river. With recent rains in the area, the river was making its presence known and was flowing fast. It was hard to believe that most of Australia was experiencing drought when we were driving through brilliant green, undulating hillside with lush vegetation.

The one lane bridges were interesting to navigate … there appeared to be no warnings of the impending danger of meeting oncoming traffic, but the locals obviously were use to it. So thanks to our GPS, we found ourselves driving through yesteryear and were enjoying every minute of it.

We eventually joined the highway again and were cruising along when we came across a sign pointing to New Italy … and never missing an opportunity for a taste of Italy, this sounded like it might be a good place to stop for a cappuccino … oh, but the GPS wasn’t happy!

The site explores the intriguing story of the New Italy settlement to the region in the 1880s and highlights the valuable contributions of the early Italian settlers who helped shape the Northern Rivers as it is today. The inscription on the monument tells the story of a group of Italian immigrants who battled great odds, not just when they arrived in Australia, but also on their voyage from Italy.

We didn’t get a chance to see the New Italy Museum, which was developed as a tribute to the courage and strength of those pioneering families, but we did make a mental note to spend more time there next time we passed. New Italy is situated some 13km south of the township of Woodburn.

The GPS was happy once we were back on the highway and we continued on to historic Wynyabbie House, which is situated between Yamba and the Scottish town of Maclean.

In Maclean, even the telegraph poles in the streets are painted in the tartans of the Scottish clans and many street signs have Gaelic translations. Apparently the town is invaded by Scottish clans and pipe bands at the annual Easter highland gathering.

The Clarence Valley incorporates lots of unique and charming towns, like Maclean, Iluka, Yamba, Corindi Beach, Broom’s Head, Ulmarra and the city of Grafton. The area has retained some significant examples of historic and colonial architecture. In fact, the entire town of Ulmarra has been classified by the National Trust.

At Wynyabbie House, we were warmly welcomed by the hosts and shown to our quaint room (with ensuite). After settling in, it was time for a stroll around the grounds to enjoy the ambience of the gardens and river setting. The sun was just setting on a picture-perfect day. The Clarence Valley has been officially confirmed to have one of the world’s best climates and as we walked around the gardens, the last few rays of sunshine were filtering through the trees and dancing on the river, sparkling like jewels.

I knew I was in the country when night fell and as I looked up into the sky, all I could see from one end to the other was an array of stars so bright and dazzling that I thought I was in another galaxy. I had obviously been living in the city for too long and had forgotten about the rich tapestry of stars that are there every night, but that we don’t always get the chance to see.

It was a cold night and it was quite nice to be able to get under the bed-covers and get warm, retiring early for the night … is this how it used to be in the olden days, I wondered?

The morning was fresh and crisp, and after enjoying a delicious continental breakfast in the enclosed rear veranda of Wynyabbie House, the sun rays beckoned us outside again. We set out to explore the region and before we knew it, we were driving home and our weekend was over, but I’m sure it won’t be the last time we visit the area.

The Clarence Valley is only a three-and-a-half-hour drive south of Brisbane, yet it may as well be a lifetime away. It is as far away from the maddening crowd as you can get. It is definitely NSW’s best kept secret.

And will we take our GPS again? Yes, and I’m sure that if I were travelling on a dark wintery night looking for that elusive B&B to rest my weary body, I would be eternally grateful for the navigational help from a rock-solid companion.

Thanks to input from local Yamba resident Mary-Jane Gibson.