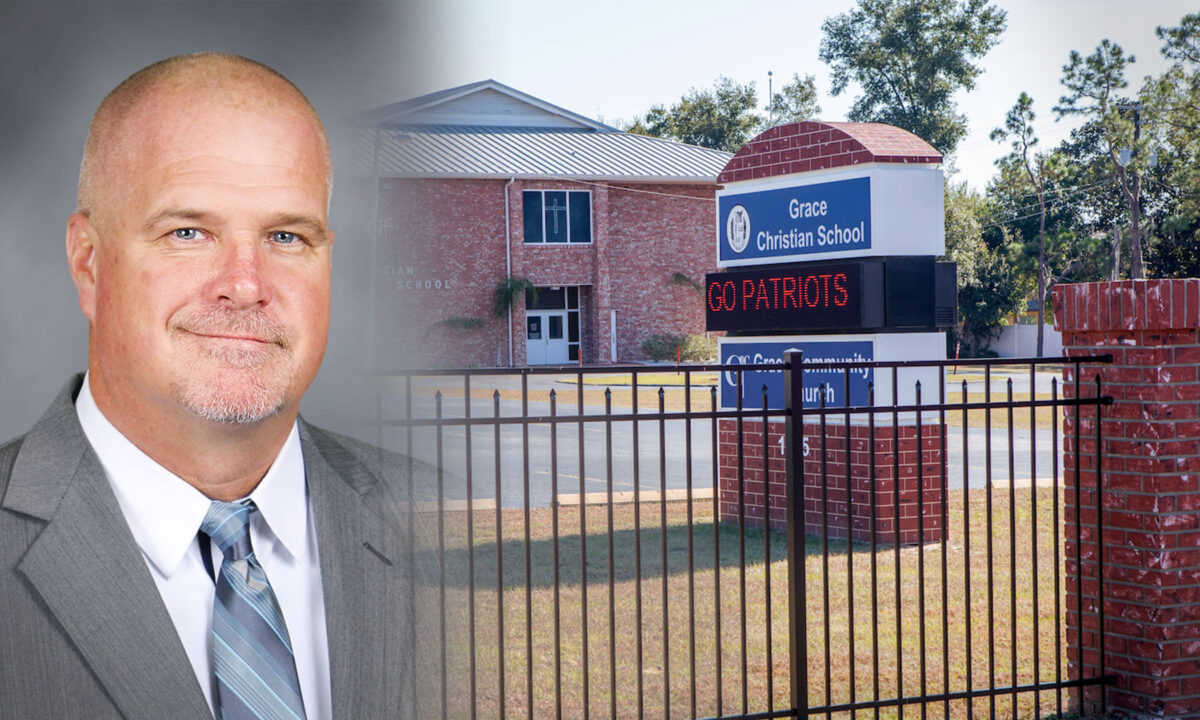 A private Christian school in Florida remains stalwart in their conviction after being spotlighted in an NBC article for saying they will refer to students according to their “biological gender,” while asking “gay and transgender students to leave.”

The school has received praise and death threats for standing their ground.

School administrator Pastor Barry McKeen, at Grace Christian School, said he received death threats after NBC highlighted an email sent by the school to parents ahead of the school year outlining, among other policies, that students found practicing “any form of homosexuality, lesbianism, bisexuality, transgender identity/lifestyle” will be “asked to leave the school immediately.”

“The backlash for about a day and a half was very severe, a lot of death threats, burn-my-house-down threats,” McKeen told The Epoch Times. “And then after about a day and a half, most of our commentary turned positive, because some of the more, I guess you could say, conservative outlets started picking up the story.”

It was more like an avalanche of support flooding in from people applauding the policy—which has been in place since the early 70s, and is now being prescribed verbatim by other Christian schools in Florida.

In the past two weeks, Grace Christian School received 7,000 emails, which were “80 percent positive,” McKeen said, along with $45,000 in donations from across the world.

As classes rang in, on Aug. 15, the NBC reporter contacted McKeen for the story. Believing Grace Christian School was being breached, the pastor declined to comment.

In the aftermath, he held his peace initially, planning to let it just “run its course.” He prayed about it, then decided to not be cowed into silence but to set the record straight.

“Our school does not allow homosexual and transgender students,” he said. “That’s true. If a student is actively involved in those lifestyles, they would be asked to leave our school.

“There were some things that were untrue. It was said in the article that I said, ‘If you’re a homosexual you go to hell.’ … I never said that. I wouldn’t say that. It’s not what I believe.

“Any sin will condemn you to hell, whether that’s homosexuality or adultery or stealing or whatever it might be.”

Grace Christian students aren’t expected to be sexual at all; they’re students and aren’t married.

The article cited a 16-year-old female student, “who is gay,” whose family was prompted “to transfer her to another religious school that is more accepting.” McKeen said it was “not really accurate” to imply that anyone was asked to leave immediately, because they “didn’t ask anybody to leave.”

In a video statement posted on the school’s Facebook page, he clarified, saying, “We had one student on one occasion, whose parents and us came to an agreement for them to be withdrawn. And that’s about it.”

He further added, “The biggest issue that happens in this culture is because you believe something and you stand for something that you’re automatically hateful. We are not hateful. Probably that’s the thing in the article that hurt the most; we’re not hateful people. We just aren’t.”

The school, in Valrico, about 20 miles east of Tampa, aims to provide students, pre-kindergarten through grade 12, a rigorous academic program and “a saving knowledge of Jesus Christ,” while training them to “serve Him in their lives.”

This contrasts markedly next to public schools across America where transgenderism and highly sexualized content are being injected into curriculums. Parents took notice at the kitchen table during COVID lockdowns.

But parents across America also stood their ground and pushed back against school boards for corrupting their children’s morals and violating their constitutional rights.

In July 2022, business leader Clint Thomas headed a group of 11 parents to launch a lawsuit against Loudoun County Public Schools to curtail policies that would prevent parents from knowing if their children expressed a different gender in school.

In May 2021, Scott Smith was arrested at a school board meeting where he became vocal about his daughter’s being raped in a girls’ bathroom by a male, who claimed to be transgender, at Stone Bridge High School—again in Loudoun County.

In liberal democratic societies where diversity and inclusion are assets, Grace Christian ought be welcome enrichment—expanding the conversation in the cause of liberty. Parents can send their children wherever they choose, McKeen said.

If they prefer the biblical worldview, they can choose Grace Christian.

“It’s a private Christian school, so parents choose to come here, they pay to come here, and they sign these policies saying we’ll abide by these standards,” he told The Epoch Times. “We’re allowed to have these rules. It’s what we believe. And if you don’t believe the same way, you don’t have to come here.”

“To believe something biblically and to be shouted down or intimidated by somebody who doesn’t believe [isn’t fair],” McKeen added. “I don’t try to enforce my beliefs on other people outside of where I am in our ministry. I don’t go to other places and try to make them believe what I believe or change their policies. I feel like they were trying to intimidate us to do that.”