'The texturizing of costumes—it screams out at you: Watch me!' 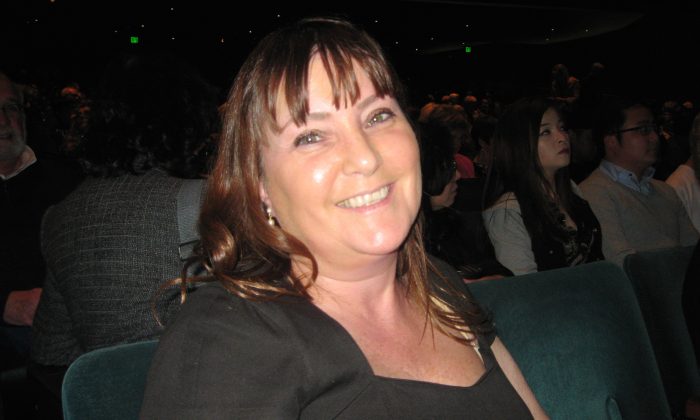 “Principles such as benevolence and justice, propriety and wisdom, respect for the heavens, and divine retribution, all come to life, washing over the audience,” read Shen Yun’s website. Such traits, as emphasized through China’s spiritual disciplines of Confucianism, Buddhism, and Taoism, stood out to Ms. Moor.

“If you took out the spirituality and the whole divine presence, it wouldn’t be classic in nature as far as a Chinese art piece,” she said. “I don’t think you can take it out and keep the integrity.”

Ms. Moore was also fascinated by Shen Yun’s keen use of costumes and colors. As noted by the company’s website, Shen Yun’s designers seek to portray “authentic presentation of the attire that comes from China’s divinely inspired traditional culture, and a consummate stage effect.”

“The mix of colors is rejuvenating, ethereal, tranquil, vibrant, beautiful,” Ms. Moore said. “The texturizing of costumes—it screams out at you: Watch me!”

When asked what people should expect from Shen Yun, Ms. Moore said, “If you have the opportunity to experience it, and if you’ve never been exposed to any kind of Chinese art form, this is the one to go to, there is something for everyone—the costumes, the dance, the visual aspect, the music—it’s great for both young and old, male and female.”

“The dance movements are different than traditional ballet,” said Seattle attorney Todd Gardener. “The grace with which they move is totally different—they look like they are floating.”

Through music, dance, and ancient stories, Shen Yun seeks to revitalize traditional Chinese culture, a culture nearly destroyed at the hands of the communist regime in China today.

“It’s very Chinese,” Mr. Gardener added. “The expression is much more formal than what we see in western dance.”

According to Shen Yun’s website, “Classical Chinese dance has a long history of thousands of years, passed down continuously within the imperial palace and ancient Chinese theater and opera.” And an important facet of these dances is their focus on “traditional aesthetic principles with its unique dance movements, rhythms, and inner meaning,” reads the website.