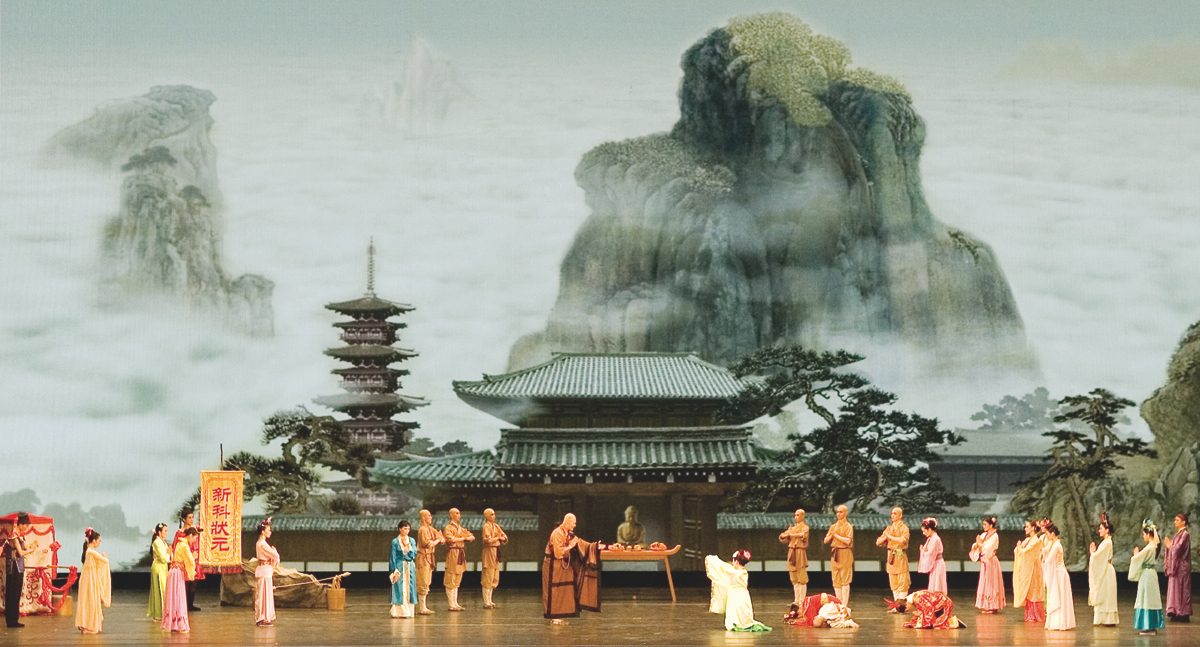 These days dance is often a controversy waiting to happen on the MTV Video Music Awards. But it wasn’t always this way. At one time, dance was a way of celebrating deeply held spiritual convictions. This is the traditional root of many dance cultures, but perhaps none more so than for classical Chinese dance.

China today is a land of rabid capitalism grinding away within a communist dictatorship, but it was once steeped in spirituality. Students would meditate before their studies, emperors sought to follow Heaven’s will on how to govern, and dance was a transcendental journey from the mundane to a celebration of the divine.

While this heart of Chinese dance has been all but expunged from modern-day China, it has not disappeared and has regained its vigour through Shen Yun Performing Arts. The New York-based dance company’s annual global tour has become a benchmark for classical Chinese dance by drawing on the wellspring of inspiration that comes from China’s ancient and profound culture.

Audiences regularly call Shen Yun’s performances uplifting. Some gush in effuse praise, speaking in superlatives of the pageantry and technical perfection of the dances. But others say it is that deeper quality, that essence which is the founding root of Shen Yun, that is most moving—the inherent divinity in Chinese culture.

“This show helps us move more and more toward a new world, a world of spirituality and divine things, and that for me is so very important,” said poet and writer Cyril Dabydeen, who has attended several shows in Ottawa over the years.

Musician Olevia Brown-Klahn was also touched: “It was a very spiritual experience, and it moved me and I cried. I kept thinking: This is the highest and the best of what humans can produce.”

Omega Medina, former senior manager for the Grammy Awards, said the experience was a gift.

“I come away with feeling like a better human being for having experienced this magnificent event. It was a completely edifying experience of the human spirit.”

In many ways, that spirit is the intangible quality that most distinguishes true classical Chinese dance. Without it there are only movements, techniques.

Reviving the Heart of a Culture

Perhaps most amazing is that Shen Yun almost couldn’t have happened. During the Cultural Revolution from 1966 to 1976, it was dangerous to partake in traditional dances, as they had been deemed feudal and superstitious, part of an old China that needed to be eliminated. Millions died in that struggle before Chairman Mao’s death ended what had become a sweeping red terror.

For decades, inspiration was to come strictly from communist ideology, and most importantly Maoist political ideology. While previous generations had looked to more enlightened sources of inspiration, contemporary dancers would confine their gaze to the narrow, carefully crafted communist narratives.

But for Shen Yun to capture true Chinese culture, it had to revive the essence of the divine culture. To that end, the company has looked for inspiration to the same source that guided generations before it.

“Throughout history almost every culture looked toward the divine for inspiration. Art was meant to uplift, bringing joy to both the people who created and experienced it. It is this principle that drives Shen Yun performers and their art,” says the company on its website.

Chinese people once believed their land was the “Celestial Empire,” a place where the mortal and divine coexisted. It was here that culture was enriched dynasty after dynasty—a cumulative process that gifted a cultural treasure to each generation that followed.

It was also a land of religion, with three district beliefs—Confucianism, Buddhism, and Taoism—forming the foundation of the culture.

“Under the influence of these faiths, Chinese culture has generated a rich and profound system of values,” the website says.

“The concepts of “man and nature must be in balance,” “respect the heavens to know one’s destiny,” and the five cardinal virtues of benevolence, righteousness, propriety, wisdom, and faithfulness (ren yi li zhi xin) are all products of these three religions’ teachings. These principles have constantly played out over China’s 5,000-year-long history.”

While espousing such beliefs was once outlawed in China, and now largely derided, they are the heart that comes out in Shen Yun’s performance, and something audiences take note of.

Zhu Zheng, a Chinese father who brought his two daughters to see the show at New York’s Lincoln Center, said that “all kind-hearted people in the world will be able to find tranquility, purity, beauty, freshness, compassion, righteousness, and hope” in the show.

“It is so fascinating that people will not want to leave,” he said. “The show demonstrates respect for Heaven, for Earth, and for the divine—a sharp contrast with the reality of today’s [communist] China that advocates struggles against Heaven, the Earth, and man.”