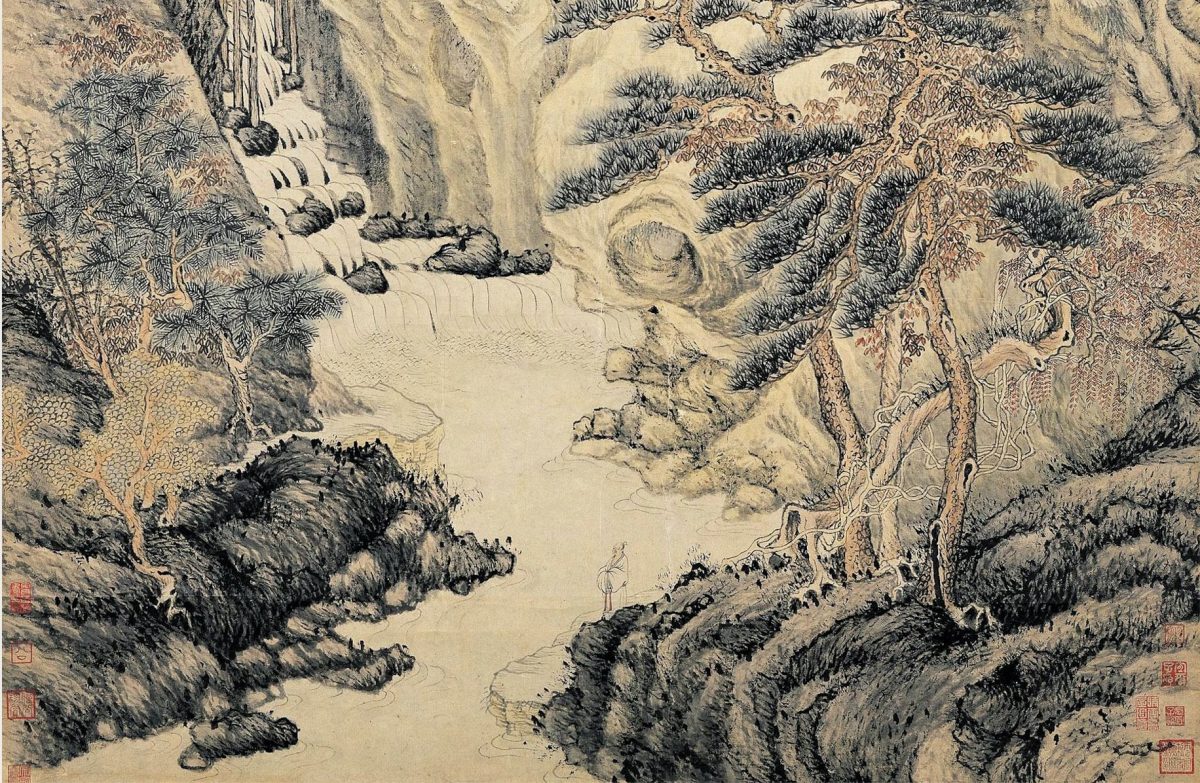 Chinese Shan Shui Painting of the Ming and Qing Dynasties

Stately mountains surrounded by flowing water—this is the essence of Chinese landscape painting, or “shan shui” (“mountain water”). Through its long development, the genre demonstrated the ancient Chinese belief that heaven and earth exist in harmony.

That ancient belief comes from Taoist philosophy which, in particular, influenced the art form: Tall, robust mountains reaching to the heavens represent yang, whereas soft, flowing water covering the earth represents yin. Situated together, these demonstrated the Taoist balance of yin and yang—essential in the design of the landscape painting. And against the backdrop of these magnificent forces of nature, humans were depicted as insignificant specks.

The Great Age of Chinese landscape painting occurred during the Five Dynasties period (907–960) and the Song Dynasty (960–1279); the genre then underwent significant developments with the literati tradition of the Yuan Dynasty (1279–1368) under Mongolian rule. The meticulous brushstroke technique was the official style of the Song court, but during the Yuan Dynasty, the literati painters, who were Chinese scholars and artists exiled from the Mongol court, focused on capturing the spirit and energy of their subjects in their paintings. They often employed calligraphic techniques as a means of self-expression and tried to depict not only what they had seen but also what they felt.

Landscape painting continued to flourish during the Ming and Qing dynasties. These artists often studied and drew inspiration from past masters but developed distinctive styles and techniques of their own. For example, the color palette of Ming and Qing artists expanded beyond those of previous artists who mostly used monochromatic ink in black or blue-green.

Perhaps the greatest development was that, unlike in the past where a single artistic movement dominated, the Ming and Qing dynasties witnessed a juggle between different schools and styles of landscape painting.

And we are fortunate that some of these great paintings can be seen at the Metropolitan Museum of Art in New York.

With the dawn of the Ming Dynasty (1368–1644) and the collapse of the Yuan Dynasty, China was under native rule once again. The Ming court sought to revive the artistic traditions of the academy of the Song Dynasty. Dai Jin (1388–1462) founded the Zhe School of painting, which was based on the national Song landscape style and characterized by a combination of high mountain peaks and soft mists.

While the Zhe School was an important school of court painting, it was overshadowed by the Wu School that was associated with the Four Ming Masters.

In fact, as imperial power waned during the late Ming, artists like Shen Zhou (1427–1509), one of the four great Ming masters, emerged, and the literati tradition made its way back into vogue. Shen Zhou had renounced his government post and lived a reclusive life. He studied the traditions of the Yuan masters and founded the Wu School. The Wu School not only represented literati painters like Shen Zhou, but also included professional painters who mastered the meticulous style closer to the style of the court.

“Lofty Mount Lu” is one of Shen Zhou’s well-known paintings that shows the stylistic influence of Yuan Dynasty painting. Located in northern Jiangxi, the lofty mountain is depicted with steep rifts and ravines. Shrubs adorn the rocky slopes and vines drape the cliffs. A waterfall plunges hundreds of feet and cascades down the rocks to form a river. Near the base of the waterfall, a small figure stands in the shade of some pine trees and appears to be looking up in awe at the scenery. The minuscule size of the figure in comparison to the mountains suggests the Taoist philosophy of human insignificance in the vast expanse of nature.

In the vein of the literati style, Shen Zhou’s brushwork seeks to express a certain sentiment. He used hemp-fiber texture strokes to portray the rocky ridges and slopes to give a faceted appearance, imparting strength and rhythmic vitality.

Shen Zhou painted this piece as a gift for his teacher, Chen Kuan, in honor of his 70th birthday. Out of admiration and respect, he used the height and vigor of Mt. Lu as an analogy for his teacher’s strong virtues. It is as if Shen Zhou depicted himself in the painting as the figure who gazes up in wonder at his teacher, who is embodied as the lofty mountain, the top of which he could never hope to reach—such is the sentiment expressed in the painting.

One of the Four Masters of the Ming was the celebrated artist Qiu Ying (1494–1552), who epitomized the professional painter of the Wu School. Although born into a family of humble origins, he acquired the support of wealthy patrons and art collectors. His style is known for its mastery of the meticulous brushwork technique that is characteristic of Ming court painting. Yet, he was able to draw upon the literati tradition without sacrificing precision to ultimately create his own unique style.

In “Jade Cave Fairyland,” Qiu Ying portrayed a terraced fairyland that is removed from the mundane world. Beginning near the bottom, a bridge crosses a flowing stream that leads into the realm of immortals. A scholar dressed in white robes plays the zither under a canopy of pine trees, as if trying to communicate with the deities. Here Qiu Ying has invoked literati motifs, as the zither was an important musical instrument of the literati scholars.

Hidden pathways amid floating clouds lead to tiered pavilions among pine and cypress trees. Jade-tinted, crystal-shaped mountains pierce the sky with their towering peaks. Qiu Ying’s use of brushwork in the piece is delicate and refined to bring out the exquisite splendor of an immortalized fairyland.

China fell under the rule of the Manchurians during the Qing Dynasty (1644–1912). Those loyal to the Ming became a minority and sought refuge in religion; some became Buddhist monks. The Four Monk Painters belonged to this group, and they expressed their frustration and longing for the fallen regime through their somber landscapes.

Perhaps more importantly, the Qing emperors fervently embraced Chinese culture and became major patrons of the arts. In contrast to the Yuan Dynasty, Qing emperors were eager to employ Chinese scholars and artists at court.

One such artist who served at the Qing court was Yuan Jiang (1671–1746), who was known for his paintings of landscapes and buildings in the meticulous brushwork style. “The Palace of Nine Perfections” is his most famous work that exemplifies his specialization for large-scale palatial complexes. A set of 12 hanging scrolls form a large screen painting that represents a fusion of references to ancient antiquity in the context of contemporary events.

Set in the hills north of Chang’an (present-day Xi’an), the piece portrays a Tang Dynasty (618–907) imperial retreat. The Palace of Nine Perfections was known as one of the most opulent residences built that was then destroyed near the end of the dynasty. Yet, rather than referring back to the Tang, the lavish palatial complexes are depicted in the contemporary Qing style architecture, with its curved rooftops, ornate architecture, and brilliant colors. The large palatial retreat sits in a vast landscape resembling an enchanted Taoist paradise, with its lush gardens and sumptuous mountains.

From the left side in the foreground, a regal procession of figures descends from the hills. A close-up reveals the Qing emperor on horseback, about to cross a bridge, followed by an escort holding a parasol. This scene is a reference to Emperor Kangxi’s second inspection tour, when he visited Yangzhou—Yuan Jiang’s hometown. Yuan Jiang was inspired by the ceremonial visit and created a painting to refer to the event in a splendid and historic setting.

The Qing court not only exhibited decorative court painting but also endorsed the literati tradition that became known as the Orthodox School of landscape painting. This school arose from the late Ming as an attempt to formalize what was once a rather private painting style of literati scholars. The painters known as the Four Wangs dominated this school and advocated for a grand synthesis of styles as a means to express their feelings and emotions toward nature.

Wang Yuanqi was the youngest of the Four Wangs and a personal painter for the Kangxi emperor. In his “After Huang Gongwang’s ‘Autumn Mountains,’” wispy clouds coil around the mountain peaks. A riverbank in the foreground zigzags through the valley before disappearing into the distant slopes. Red-orange specks of color are sprinkled among the greenery for a tint of autumn. While his style was influenced by the Yuan Dynasty painter Huang Gongwang, Wang developed his own techniques as well. He often used dry brushstrokes for texture and created his own unique diamond-pestle tip brushwork technique.

Influence From the West

As contact with the West increased during the Qing Dynasty, court artists were influenced by European oil and fresco painting techniques as well as the concept of linear perspective. The Italian Jesuit missionary painter Giuseppe Castiglione (1688–1766) served under three emperors in the Qing court. He developed a Sino-European technique that combined the Western techniques of light and shadow with the Chinese techniques of brush and ink.

Castiglione’s most significant painting that represents this fusion is his “One Hundred Horses.” This handscroll spans over grassland plains, mountains, and a riverbank, where a hundred horses are depicted in different poses and activities. Some are grazing leisurely, while others frolic playfully, combat aggressively, and so on; some are crossing the water.

The foreground displays Western features while the background displays Chinese characteristics. Linear perspective is evident as objects farther away diminish in size. Castiglione’s use of texture brushstrokes and outlining for the hills and mountains shows a Chinese influence. Ink washes in the background portray a soft, hazy atmosphere that also reveals native techniques. The trees, grasses, and shrubs in the foreground have shadow and contrast, while the horses are given a full-bodied, volumetric quality. However, he purposely toned down the overall shading to avoid dramatic contrast, which was intended to create a seamless blend of the two traditions of painting.

Throughout each dynasty, cultural, political, and social influences shaped the different styles and schools of landscape painting. Yet throughout, the philosophies of ancient China remained consistent, lending the genre a profundity that shaped the rich heritage of ancient Chinese art.