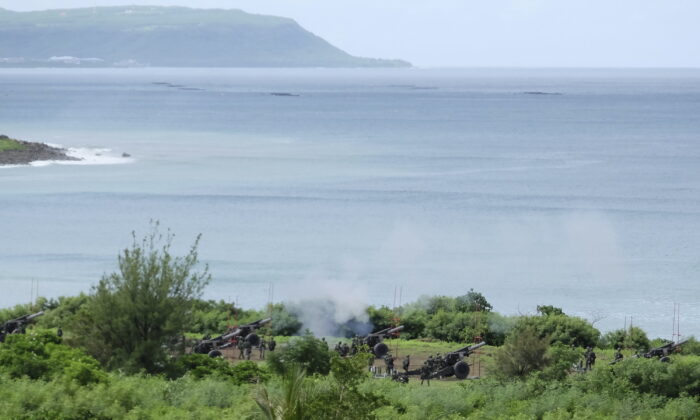 The Chinese Communist Party (CCP) is using military exercises around Taiwan to prepare for an invasion of the island, according to Taiwan’s foreign minister.

“China has used the drills in its military playbook to prepare for the invasion of Taiwan,” Joseph Wu said at a news conference on Aug. 9.

“It is conducting large-scale military exercises and missile launches, as well as cyberattacks, disinformation, and economic coercion, in an attempt to weaken public morale in Taiwan.”

Wu did not give a timetable for when he expects the CCP to mount an offensive on the island, but U.S. military leaders have estimated such an attack could happen by 2027.

The CCP claims that Taiwan is a rogue province of China and has vowed to unite the island with the mainland by any means necessary. However, democratic Taiwan has never been controlled by the CCP and has been self-governing since 1949. As such, Taiwan rejects China’s sovereignty claims and maintains that only the Taiwanese people can decide the island’s future.

Communist China launched a series of escalatory military exercises last week, which have encircled Taiwan with CCP forces and compressed the island’s air and sea pathways.

Since then, China has cut regional military communications with the United States and fired at least 11 ballistic missiles, five of which flew directly over Taiwan and landed in the waters of Japan’s exclusive economic zone.

CCP authorities claim that the exercises are a protest against U.S. House Speaker Nancy Pelosi’s (D-Calif.) visit to Taiwan last week. Taipei and Washington claim that the CCP is manufacturing a crisis in order to establish a pretext for mobilizing its military around Taiwan and unilaterally changing the status quo in the region.

To that end, there is an ongoing standoff between Chinese and Taiwanese forces around the median line of the Taiwan Strait involving about 10 warships from each government.

Wu said that the CCP’s continued efforts to transgress across the median line provided “a clear image of China’s geostrategic ambitions beyond Taiwan” and urged greater international support to stop China from effectively controlling the strait.

“After the drills conclude, China may try to routinize its action in an attempt to wreck the long-term status quo across the Taiwan Strait,” Wu said.

Numerous international forums, including the G-7, ASEAN, and IPAC, have condemned China’s aggression and called on the regime to pursue a peaceful end to current tensions.

“There is no justification to use a visit as pretext for aggressive military activity in the Taiwan Strait,” said a G-7 statement last week.

“We call on [China] not to unilaterally change the status quo by force in the region, and to resolve cross-Strait differences by peaceful means.”

China’s Eastern Theater Command, which oversees the part of China nearest Taiwan, said on Aug. 8 that it would conduct more military exercises around Taiwan, focusing on anti-submarine and sea assault operations.

On Tuesday, the command said it continued military exercises in the seas and airspace around Taiwan with warships and fighters. It was unclear if the statement meant that the Chinese regime would halt its live-fire missile exercises.

Concerning the possibility of escalation in the region, U.S. President Joe Biden said on Monday that he was concerned about China’s actions but not worried about an invasion of Taiwan.

“I’m not worried,” Biden said, “but I’m concerned that they’re moving as much as they are.”

“I don’t think they’re going to do anything more.”