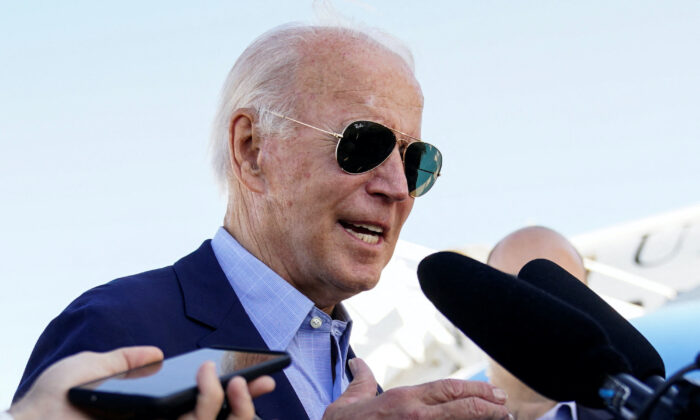 U.S. President Joe Biden talks to reporters while boarding Air Force One on travel to Eastern Kentucky to visit families affected by recent flooding, as he departs from Delaware Air National Guard Base in New Castle, Delaware, on Aug. 8, 2022. (Kevin Lamarque/Reuters)
Taiwan

Biden on Taiwan: ‘I’m Not Worried, but I’m Concerned’

Speaking to reporters at Dover Air Force Base on Aug. 8, U.S. President Joe Biden said that he did not believe the Chinese Communist Party (CCP) presented an immediate threat to Taiwan but expressed concern about the number of troops and materiel being moved about the region.

“I’m not worried,” Biden said, “but I’m concerned that they’re moving as much as they are.”

“I don’t think they’re going to do anything more.”

The comments came shortly after the CCP announced a new set of military exercises on Monday and vowed to continue operating on Taiwan’s side of the median line in the Taiwan Strait. Those new exercises, in turn, followed the regime’s largest ever joint military exercises around Taiwan last week, which resulted in the launch of 11 ballistic missiles—some of which flew over Taiwan and landed in the waters of Japan’s exclusive economic zone.

Despite Biden’s hopeful forecast of the situation, the White House said that the CCP had positioned itself to take future actions against Taiwan.

“China has positioned itself to take further steps, and we expect that they will continue to react over a longer-term horizon,” said White House National Security Council Coordinator for Strategic Communications John Kirby last week. “The United States will not seek and does not want a crisis. [But] we are prepared to manage what Beijing chooses to do.”

“We take our security commitments in the region broadly very, very seriously. We have robust military capability obviously available to meet those commitments,” Kirby said.

Taiwan Foreign Minister Joseph Wu said on Aug. 9 that he believed the escalatory exercises were part of the CCP’s larger plan for an invasion of Taiwan.

“China has used the drills in its military playbook to prepare for the invasion of Taiwan,” Wu said during a news conference.

“After the drills conclude, China may try to routinize its action in an attempt to wreck the long-term status quo across the Taiwan Strait.”

The CCP claims that Taiwan is a rogue province of China and has vowed to unite the island with the mainland by any means necessary. Democratic Taiwan has never been controlled by the CCP and has been self-governing since 1949.

Current tensions exploded last month when CCP authorities claimed that House Speaker Nancy Pelosi’s (D-Calif.) visit to Taiwan was a provocation against its sovereignty and threatened “forceful measures” against the United States.

Biden responded to this threat one day later by saying publicly that Pelosi’s trip was “not a good idea.” However, it is common practice for congressional delegations to visit the island.

That remark was widely seen as an overreach of the executive branch into the personal travels of a sitting member of Congress.

To that end, Biden clarified his stance on the issue on Monday.

“That was her decision,” Biden said.