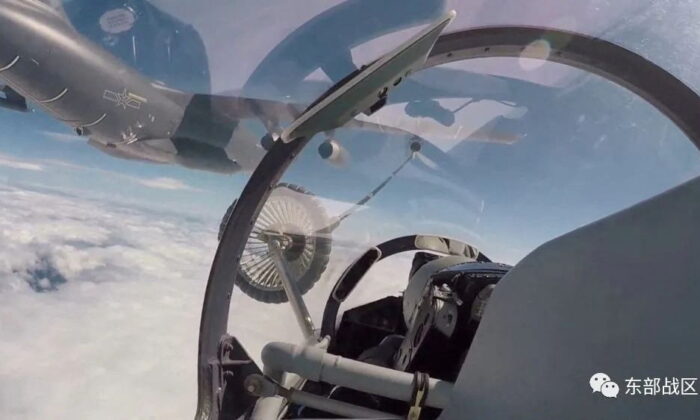 An air force aircraft under the Eastern Theater Command of China's People's Liberation Army (PLA) gets refueled mid-air during military exercises in the waters around Taiwan, in this screengrab from an Aug. 4 video released on Aug. 5, 2022. (Eastern Theater Command/Handout via Reuters)
Taiwan

The Chinese Communist Party (CCP) announced a new round of invasive military drills around Taiwan on Aug. 8, in a further challenge to the island’s sea and air space.

The statement follows just one day after the scheduled end of the CCP’s largest military exercises around the island, ostensibly begun in protest against last week’s visit to Taiwan by U.S. House Speaker Nancy Pelosi (D-Calif.).

China’s Eastern Theater Command, which oversees the portion of the mainland closest to Taiwan, said the new drills would focus on anti-submarine and sea assault operations. In an unprecedented escalation, the CCP also stated that it will regularly commence military drills on Taiwan’s side of the Taiwan Strait.

The move is likely to be seen as a major provocation by the international community, as the CCP has historically been reticent to cross the median line of the strait. CCP authorities also ceased communications between Chinese and U.S. military leaders within the theater late last week, increasing the possibility of miscommunication.

Taiwan’s Foreign Ministry condemned the move, saying that China is deliberately creating crises. It demanded that CCP leadership stop its hostile military actions and “pull back from the edge” of conflict.

“In the face of military intimidation created by China, Taiwan will not be afraid nor back down, and will more firmly defend its sovereignty, national security, and free and democratic way of life,” the ministry said in a statement.

The comment echoed language used by the White House last week, which accused the CCP of manufacturing crises to justify an increase in military intimidation of Taiwan.

The CCP claims that Taiwan is a rogue province that must be united with mainland China, and hasn’t ruled out the use of force to accomplish that goal. However, Taiwan has been self-governed since 1949 and has never been controlled by the CCP.

CCP leadership has fumed over Pelosi’s trip for nearly a week, going so far as to launch 11 ballistic missiles over Taipei, Taiwan’s capital city, for the first time, some of which fell into the waters of Japan’s exclusive economic zone. Despite the furor, it isn’t unusual for congressional delegations to visit Taiwan.

International forums, including the Group of Seven (G-7) industrial nations and the Association of Southeastern Asian Nations, also condemned the CCP’s aggression in the region and urged the regime to pursue a peaceful outcome to tensions.

“There is no justification to use a visit as [a] pretext for aggressive military activity in the Taiwan Strait,” the G-7 said in a statement. “We call on the PRC [People’s Republic of China] not to unilaterally change the status quo by force in the region, and to resolve cross-Strait differences by peaceful means.”

The duration and precise location of the latest drills aren’t yet known. Taiwan has already eased some flight restrictions near the six earlier Chinese exercise areas surrounding the island, which interfered with international travel.

Taiwan’s Defense Ministry stated that it detected 39 Chinese military aircraft and 13 naval vessels in and around the Taiwan Strait on Aug. 8. It noted that 21 Chinese aircraft entered Taiwan’s Air Defense Identification Zone, including fighter jets that crossed the median line in the northern part of the Taiwan Strait.

Beyond the firing of 11 ballistic missiles, Chinese warships, fighter jets, and drones maneuvered extensively around the island, drawing responding forces from Taiwan’s military.

Shortly before the first set of exercises ended on Aug. 7, about 10 warships each from China and Taiwan maneuvered around one another in close quarters near the median line of the Taiwan Strait.

Taiwan’s Defense Ministry stated that the CCP’s newly designated no-fly zones encircling the island had “compressed” Taiwan’s training space and would affect the normal operation of international flights and air routes for the foreseeable future.