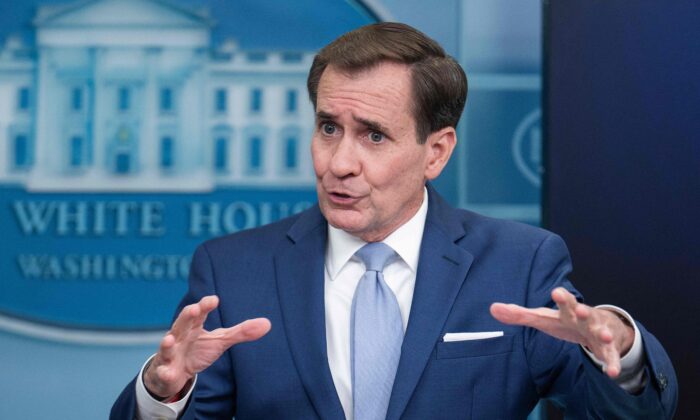 The White House condemned the Chinese Communist Party’s (CCP) launch of 11 ballistic missiles into the waters around Taiwan Thursday. The administration also said that it would move an aircraft carrier strike group into the region to defend its partners and allies.

“The People’s Republic of China launched an estimated 11 ballistic missiles towards Taiwan which impacted toward the northeast, the east, and southeast of the island,” said White House National Security Council communications coordinator John Kirby.

“We condemn these actions, which are irresponsible and at odds with our longstanding goal of maintaining peace and stability across the Taiwan Strait and in the region.”

Several of the missiles launched by China traveled over Taiwan and landed in the waters of Japan’s exclusive economic zone, which is an area 200 nautical miles (230 miles) from the country’s coast. The aggressive move followed a highly-publicized visit of House Speaker Nancy Pelosi to Taipei earlier in the week.

CCP leadership falsely claimed that the Speaker’s visit was a change to the status quo between China, Taiwan, and the United States, though members of the U.S. Congress from both parties have previously visited the self-governed island.

As such, China’s retaliatory measures against Taiwan have been met with international condemnation and calls for the CCP to abandon its threatening actions and pursue peace. Both the G7 and ASEAN issued statements following the announcement of China’s military exercises, urging the CCP to seek a peaceful resolution to the crisis.

Kirby said that China’s actions represented a drastic escalation in a long line of attempts by the CCP to forcibly unite Taiwan with the mainland.

“China has chosen to overreact and use the Speaker’s visit as a pretext to increase provocative military activity in and around the Taiwan Strait,” Kirby said. “We anticipated that China might take steps like this.”

“Beijing’s provocative actions are a significant escalation in its long-standing attempt to change the status quo,” he added.

In response to the CCP’s “attempt to coerce and intimidate Taiwan,” Kirby said, the United States would station the USS Ronald Reagan aircraft carrier and its strike group in the region, and would have the group transit the Taiwan strait several times in the coming weeks. Such was necessary, he said, to defend the nation’s allies, including Japan.

“The United States is prepared for what China chooses to do,” Kirby said. “We will not seek, nor do we want, a crisis.”

“At the same time, we will not be deterred from operating in the seas and the skies of the western Pacific, consistent with international law as we have for decades supporting Taiwan and defending a free and open Pacific.”

Kirby added that the United States was prepared to respond to any CCP threat “across all the tools of government.”

For the sake of transparency and clarity, he said, and to help to deescalate the situation, the United States would reschedule an intercontinental ballistic missile (ICBM) test that was to take place this week, and conduct it instead in the coming weeks.

“As China engages in destabilizing military exercises around Taiwan, the United States is demonstrating instead the behavior of a responsible nuclear power by reducing the risks of miscalculation and misperception,” Kirby said.

“This is how we’re going to defend America’s national security interests and our values.”

Despite the hopeful rhetoric, Kirby added that he fully expected the CCP’s hostile actions to continue in the near and medium term, as the regime sought to establish a “new normal” regarding the international community’s relationship with Taiwan.

“We’re not going to accept a new status quo,” Kirby said. “And it’s not just the United States, but the world as well.”

“There’s no reason for this manufactured crisis to exist.”