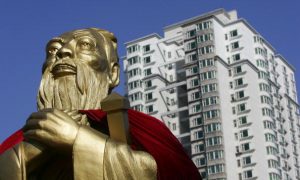 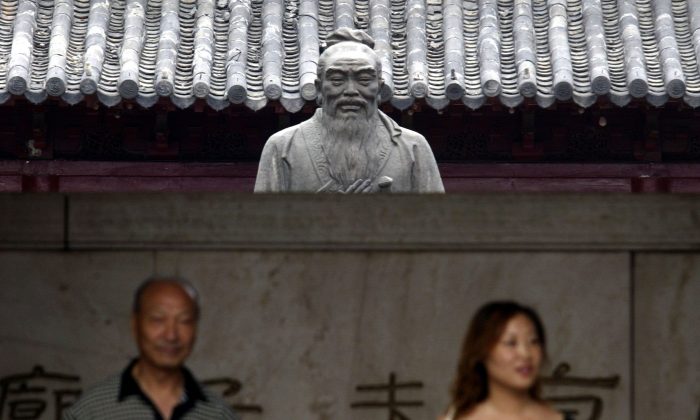 Tourists in front of a statue of Confucius in Nanjing, Jiangsu Province, China, in this file photo. (China Photos/Getty Images)
UK

It’s the first time such a prominent group of British politicians has spoken out against Confucius Institutes (CIs), even though serious concerns have been raised for years by the United States and Canada.

Critics have long maintained that the institutes are part of China’s “soft power” propaganda tools of the communist state. They say academic freedom in CIs is limited, their source of funding is opaque, and they discriminate against religious minorities.

“We welcome and encourage language teaching and cultural exchange, but we believe a review is necessary to assess whether Confucius Institutes represent a threat to academic freedom, freedom of expression, other basic rights, and indeed national security,” Bruce said in a statement.

She added that measures should be put in place requiring “transparency and accountability in any future agreements between British institutions and Confucius Institutes.”

The Chinese Communist Party, which claims that Confucius Institutes promote Chinese language and culture, have about 525 CIs worldwide and at least 29 in the UK. They are embedded at major universities such as Edinburgh, Liverpool, Manchester, Newcastle, Nottingham, Cardiff, and University College London, along with 148 so-called Confucius classrooms in high schools around the UK.

“The Confucius Institute is an appealing brand for extending our culture abroad,” Li said. “It has made an important contribution toward improving our soft power. The ‘Confucius’ brand has a natural attractiveness. Using the excuse of teaching Chinese language, everything looks reasonable and logical.”

Teachers at Confucius Institutes around the world are employed by China and are subject to Chinese laws, which include tight restrictions on speech.

“The Confucius Institute is an extension of the Chinese education system, directly controlled by the state and having the same ideological and propaganda roles as schools and universities in China,” Dr. Tao Zhang from Nottingham Trent University wrote in his submission to the Conservative Party Human Rights Commission.

The Hanban website states that Chinese-language instructors have to be “aged between 22 to 60, physically and mentally healthy, with no record of participation in Falun Gong and other illegal organizations, and no criminal record.”

Rachelle Peterson of the National Association of Scholars said in her evidence that Yin Xiuli, director of the New Jersey City University Confucius Institute, told her in 2016, “We don’t touch” issues such as Taiwan, Tibet, and Falun Gong.

Concerns over CIs have prompted some universities to end or review their relationships with them.

In December 2018, the University of Michigan announced it wouldn’t renew its contract with its Confucius Institute, citing “a desire to more broadly include the work of exploring and studying Chinese visual and performing arts.”

In June 2018, Rob Stokes, a lawmaker for education in the Australian state of New South Wales, said he had concerns about the Institutes’ lack of transparency and possible “inappropriate influences from foreign powers.”

“We do share that concern about the Confucius Institutes. We’ve been watching that development for a while,” Wray said.

In a declassified page from a CIA report, the agency warned that China coerces academics to self-censor by using financial incentives and disincentives.

“The CCP often denies visas to academics who criticize the regime, encouraging many China scholars to preemptively self-censor, so they can maintain access to the country on which their research depends,” the report said, according to the Washington Free Beacon.