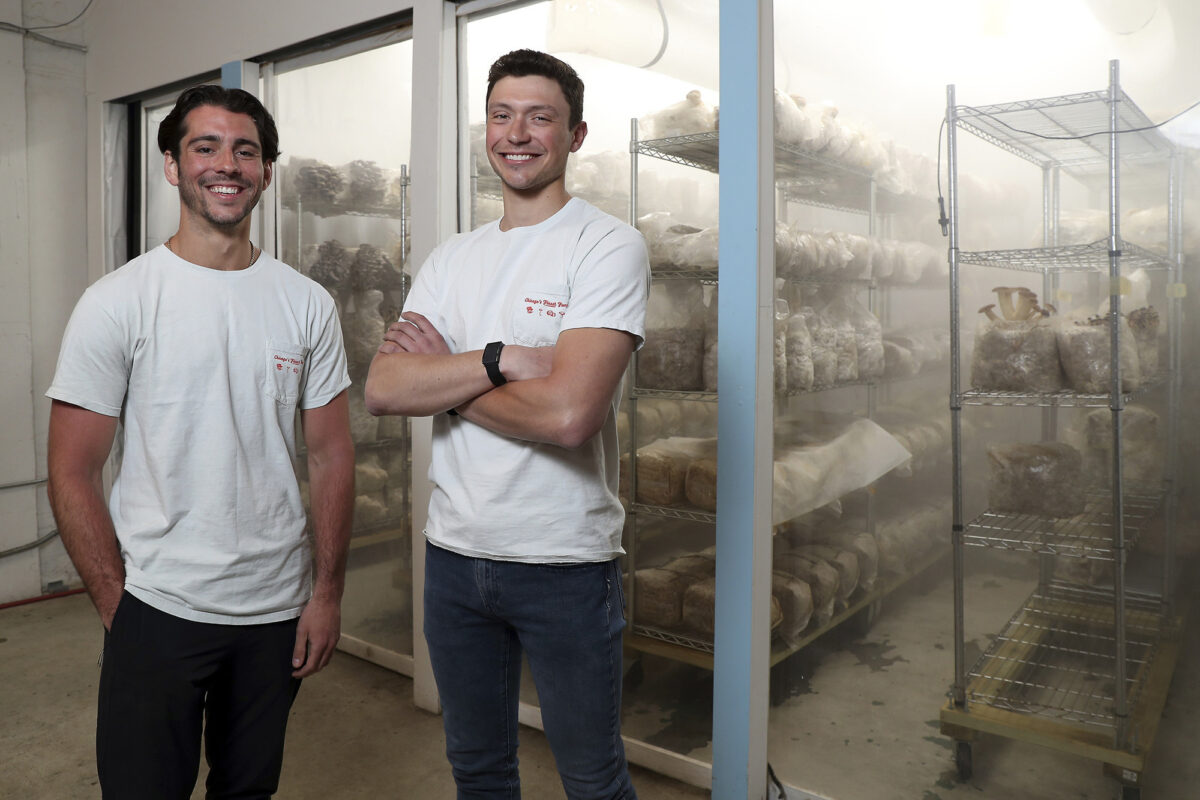 Chicago’s Top Fungi Guy Is out to Save the World, One Beautiful Mushroom at a Time

By Lisa Shames
From Chicago Tribune

Chicago—Contrary to what his profession might lead you to believe, Joe Weber hasn’t always been obsessed with mushrooms.

It’s not that he hated them either. Rather, while growing up in Hoffman Estates, Illinois, he didn’t think about mushrooms at all, beyond the rare occasion they would make an appearance at his family’s dinner table. When they did, he wasn’t impressed.

These days, as founder and CEO of Chicago’s Four Star Mushrooms, an indoor mushroom farm, it’s pretty much all the 26-year-old thinks about. For the past 2 1/2 years, Four Star Mushrooms has been supplying high-quality fungi including lion’s mane, blue oyster, black pearl, pioppino and chestnut, grown under rigorously monitored systems without the use of pesticides or fertilizers, to some of the city’s most ingredient-driven restaurants — think Alinea, Smyth, Oriole and vegan spot Fancy Plants Cafe — as well as retailers Local Foods and WhatsGood Farm Shop.

With the mid-June opening of a 11,000-square-foot state-of-the-art production facility in the West Loop’s Kinzie Corridor that will include grow rooms, a dry lab, cold storage, a retail storefront, a dining concept, and a commercial kitchen and wet lab for research and development, Weber will be spending even more time focused on fungi.

“We’re trying to revolutionize the cultivation of mushrooms and change our food system,” he said of the new facility, which will open in phases with plans to be in full operation by end of the year.

Weber’s interest in ecology began in earnest while at the University of Illinois at Urbana-Champaign, where he graduated with a Bachelor of Science in biology. It was there he learned agriculture is the largest cause of habitat and biodiversity loss. “I came at this trying to solve that problem,” he said of Four Star Mushrooms.

Mushrooms, it seems, can do some magical things for the environment. “Mushrooms are this interesting interface between life and death and nutrient recycling,” Weber said of mushrooms’ ability to feed off organic waste material. “At the end of the day, nutrient cycling is this thing that allows our ecosystem to work. If you remove that aspect of it, then everything falls flat. That’s kind of what we are experiencing now across the Great Plains with mono-crop agriculture and increasing fertilizer inputs.”

It was mushrooms’ earth-friendly capabilities, relative ease of growth, and medicinal and health benefits that motivated Weber to action.

After a mid-2019 mushroom-focused deep dive on YouTube and podcasts and with the help of his entrepreneur-expert dad, Weber launched Four Star Mushrooms inside a rented 400-square-foot space in a multiuse Logan Square building. Soon after, a neighboring space was acquired to keep up with demand from the city’s in-the-know chefs, tripling Four Star’s footprint and increasing output to 500 pounds a week. (Picture 1,000 of those grocery store cartons.)

“At the very beginning of COVID in March 2020, Joe dropped off a flat of mushrooms, and I’ve been ordering them nearly every single week since,” said Fancy Plants Cafe chef and owner Kevin Schuder, himself an aficionado of making tempeh and koji for his vegan restaurant. “While they were always excellent, I love how the quality of the mushrooms has continually improved as Joe continues to find a better method of growing.”

Beyond the thrill of working with some of the city’s best chefs and seeing his handiwork featured on their menus and Instagram accounts, Weber is particularly excited about the multi levels of recycling his mushrooms can generate. Grown with waste products — in this case, soybean hulls and red oak sawdust — the spent substrate is then recycled even further to make a nutrient-rich compost. Early on, Weber began sharing his mushroom compost with Herban Produce, a Garfield Park farm, and the initial results have been promising.

“The faster we can turn this into a valued-added product, the faster we can use it to restore land and grow crops in these vacant lots in the South and West side communities,” he said. “There is a huge opportunity for community gardens there and for food security.”

But in order for that to happen, Four Star needed to up its production considerably. Which brings us back to the new facility. When its fully up and running, it will be able to produce between 8,000 and 12,000 pounds of mushrooms per week, which means more of that nutrient-rich compost will be available too.

To help make his dream a reality, Weber brought on childhood friend and fellow environmentalist Sean DiGioia as Four Star Mushroom’s chief operating officer. With a background in finance and corporate banking, DiGioia is a great complement to Weber’s science knowledge. “I needed to fulfill a greater ‘why’,” DiGioia said of his career pivot.

Additionally, Four Star now has a production manager and a chef, or culinary liaison, as Rudy Carboni’s role has been dubbed. Carboni also functions as Four Star’s delivery driver. “He has worked at Alinea and Esmé and understands how the kitchens work and what the chefs want to see,” DiGioia said.

With the opening of the new facility, there will be plenty more for chefs to see. “This expansion effort will allow us to grow mushrooms to the exact specification of our customers, rain or shine, 365 days a year, as well as bring lesser-known and lesser-grown fungi into the mainstream,” Weber said. “If we could offer, say, morels as fresh and flavorful in December for Christmas and New Year’s menus as in early spring, we think that would be a big value addition for our chef customers.”

It’s not by chance the new Four Star Mushrooms is in the West Loop. “We are two miles from Fulton Market, which is the best strip of restaurants in the country, if not the world, in terms of density,” Weber said.

One of those restaurants is Smyth. When they met, chef and co-owner John Shields had a request for Weber.

“I proposed some challenges I wanted as a chef and cook that I thought would be more interesting than the norm,” said Shields, who is no stranger to getting creative with ingredients for his Michelin two-star restaurant. From that discussion, Weber experimented with growing a miniature golden enoki to fit Shields’ specifications. “It opened up some cool ideas and dialogue and is a win for both for us,” Shields said. “It reinforced our future relationship and things we are going to work on.”

While Four Star’s original indoor farm had plenty of environmental controls in place to regulate and enhance the growth of its mushrooms, the new facility goes much further. “This new space will allow us to precisely control temperature, oxygen, lighting spectrum, (carbon dioxide) and humidity,” Weber said. “All those factors culminate in the way the mushroom reacts.”

And it’s not just culinary professionals who can get in on the fungi fun. Inside the cutting-edge space, visitors will get a front-row seat to the indoor cultivation process showcased through glass walls. “The entire design is behind glass, so people can come in and see exactly where their food is grown and how it is being handled,” DeGioia said. “We are changing the way we look at food transparency and truly letting people see feet in front of them where their next meal is coming from.”

A retail storefront is also in the works as well as a dining experience, utilizing mushrooms grown on-site and specifically curated for their menus. In the wet lab, Four Star will “dabble” with creating prepared food products, and tinctures and teas made from mushrooms.

Mostly, however, Weber envisions Four Star as a source of production for others wanting to explore that growing business. A demo kitchen will give interested chefs a literal taste of what Four Star offers. “We are trying to set ourselves for much success in the future as possible,” Weber said.
Mushroom-haters, consider yourselves warned.