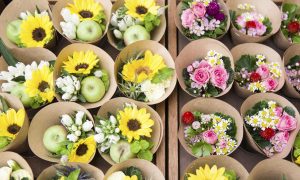 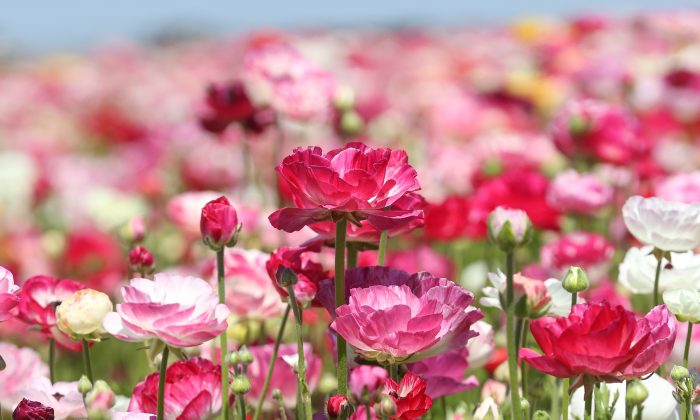 Cherry Blossom Season Over Too Soon? Here’s Where to Get Your Fill of Flowers

The tender, transient beauty of flowers sends bloom chasers every year into a kind of floral-driven bliss—not to mention, Instagram-fever, judging from all the #cherryblossom and #superbloom hashtags.

Flowers have inspired poets and artists throughout the ages. A passage in Shakespeare’s “King John” finds nothing to improve upon their form or fragrance:

“To guard a title that was rich before,
To gild refined gold, to paint the lily,
To throw a perfume on the violet,
To smooth the ice, or add another hue
Unto the rainbow, or with taper-light
To seek the beauteous eye of heaven to garnish,
Is wasteful and ridiculous excess.”

If the end of the all-too-short cherry blossom has you sighing, know you can look forward to other blooms. Throughout the spring and summer, many types of flowers are sought after and celebrated. Here are a few highlights within the United States where you can get your flower fill.

For wildflowers, don’t overlook national parks and state parks. For example, Great Smoky Mountains has more than 1,400 species of wildflowers (bonus if you time a visit to catch the fireflies’ synchronous flashing, end of May through early June).

Yellowstone’s forest canopies, meadows, and slopes also put on dazzling displays from lupine to glacier lilies. “The Yellowstone is a wild-flower garden. Wander where you will, you have the ever-new charm, the finishing touch, the ever-refreshing radiance of the wild flowers,” noted naturalist Enos Mill in 1917.

According to Beverly Solomon, creative director at Beverly Solomon Design in Texas, “It is just understood here in Texas that one of the best wildflower drives in Texas—and maybe the world—is Highway 16 through the beautiful hill and wine country just west of Austin and San Antonio. Highway 16 runs north and south through the state, but the section between Cherokee on the north and Bandera to the south is exceptional.”

2019 is turning out to be a great year for wildflowers, she said, due to the heavy fall rains. Peak time is expected to be between mid-April to early June, she added—perhaps even into July, when the Texas heat hits. “But the springs and rivers are amazingly cool—staying around 70 degrees F even in the hottest August,” she said.

Solomon recommended a side trip to Colorado Bend State Park, about 18 miles east of Cherokee, Texas. She said, “It is not even well-known to native Texans even though it has the tallest waterfall in Texas. It is over 5,000 acres of caves, canyons, and great hiking along three miles of the Colorado River. Although the river is not great for swimming, there are crystal clear springs that feature stair-stepping pools fed by small waterfalls from one to another. These are great water fun.”

“The City of Rochester was built on the Genesee River. The very first settler on the river in this area did so only to harvest the water power for turning grain into flour. Soon, the concept caught on, and the river was lined with flour mills. That’s how our city earned its first nickname, the Flour City,” he said.

Around the time that the grain industry declined, in the later half of the 19th century, a nursery business started near the river. The Ellwanger and Barry Nursery, as well as several local seed companies, also experienced great success.

“Soon, we became known as The Flower City, both a nod to the previous Flour and an honor depicting our status in the blooming industries,” Clemens said.

Every spring, Rochester celebrates the Lilac Festival, a weeklong celebration. This year it takes place May 10–May 19.

“Not only does it smell great, it’s as picturesque as you can imagine,” Clemens said.

Located on the eastern shore of Lake Michigan, Holland has a long connection to its Dutch heritage, and is especially known for its tulip celebration. Now in its 90th year, Tulip Time runs May 4–12 this year.

It all started in 1927, when biology teacher Lida Rogers spoke to the local Woman’s Literary Club about civic beauty, as a way to promote civic pride. She finished off with the poem “Come Down to Holland in Tulip Time”:

Rogers had ready help from her students; the next year, they bought and planted 2,000 bulbs around the high school.

In an oral history interview from 1997, Don Postma, who grew up in Holland and was a student of Rogers, said, “Tulip Time developed into a life of its own, and it was one of the things that helped pull this community out of the Depression, without question. It provided a means of income, it provided an incentive, it gave people in this town some hope, and it was a great thing to see.”

Originally opened as McKee Jungle Gardens (complete with alligators, monkey, and lions) in 1932, the 18-acre McKee Botanical Garden celebrates waterlilies on June 15 (minus the wild animals these days). It is home to the largest collection of waterlilies in Florida, with over 80 varieties.

Photographers take note: A photo contest is ongoing until June 11, including a youth category for the photographers under 17.

A children’s garden is opening this summer. Admission $8-$10.

Over 60 acres of ranunculus, also known as Persian buttercups, are the draw here. Originally these flowers only came in either red or yellow and were composed of a single layer of petals. But over time and through selection, horticulturists coaxed 13 different colors and were able to create fuller double-petaled blooms.

In addition, three acres of roses, orchids, and an ocean view await, as well as a sweet pea maze and an American “flag of flowers,” consisting of red, white, and blue petunias.

The last day of the season for the public is on Mother’s Day, May 12, featuring dancers from the Rancho Buena Vista High School’s Ballet Folklorico. Admission ranges from $9 for children to $18 for adults.

Over 100 years ago, Portland city officials looked to put Portland on the map as the “summer capital of the world.” The city’s Rose Festival thus was born.

There is a terrific slew of activities, from concerts to all kinds of races: dragon boat races, runs and walks, and car racing. The most intriguing of all might just be the Milk Carton Boat Race (June 23), where kids and adults alike will showcase their human-powered boats made of recycled milk cartons and jugs, in pursuit of the coveted Best in Show milk can trophy.

(For reference, the race guide informs you that a one-gallon plastic jug can support eight pounds of weight; a one-quart paper carton floats two pounds.)

The centerpiece of the weeks-long festival is the Grand Floral Parade (June 8), which draws hundreds of thousands of viewers along the four-mile route. This year, expect 15 full-size floral floats, 12 floral mini-floats, 16 marching bands, and 18 equestrian units.

Fun fact: The floats use enough flowers to send your mom a dozen roses every day for 30 years.

Sometimes the urge goes beyond admiring flowers—you just want to pick them. When that’s the case, head over to spots that will let you do so:

On Long Island’s North Fork, Lavender by the Bay, in East Marion, grows French and English lavender. The family farm is open now, but for peak bloom times (usually between mid- or late-June through mid-July), check for updates on their Facebook page. A smaller bloom of English lavender occurs in September. Confirm U-pick before your visit, as times are limited—usually Monday through Thursday, 9–11:30 a.m, while the lavender is blooming. Admission $8–$10.

Peonies are the star at Peony’s Envy, a nursery and seven-acre display gardens in Bernardsville, New Jersey. The display gardens showcase 700 varieties and 50,000 individual peonies, which bloom at staggered times over six weeks from late April through June. The most spectacular bloom of herbaceous peonies occurs around Memorial Day (check their Facebook page for updates). From May 25 to June 9, the nursery has 12 acres of U-pick fields in Liberty Corner, New Jersey Admission is $10 per person for the gardens, valid the same day for the U-pick fields.

Burnside Farms in Nokesville, Virginia, is located about an hour’s drive from Washington. Though the tulip season is over, the farm will be opening its doors around mid-July through Labor Day for sunflower picking. The farm grows 30 varieties on eight acres to ensure successive blooming over six weeks. Don’t miss the sunflower maze, which only blooms for two weeks. Single-day admission price is still to be determined; a Sun Pass ($15) allows for entry anytime over the season.