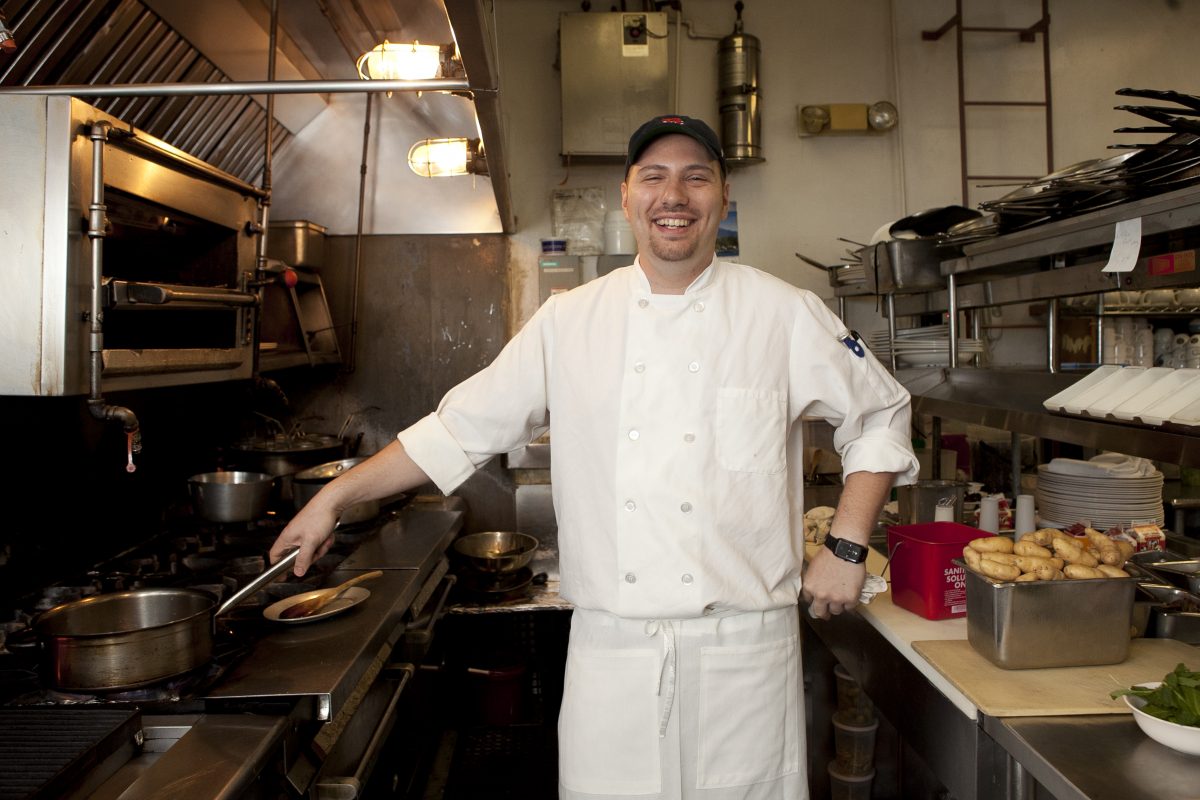 Christopher Wall took over as executive chef at Gabriel’s Bar and Restaurant near Columbus Circle in September. Wall most recently came from One if by Land, Two if by Sea in the West Village, where he was the executive sous chef. Before that he was sous-chef at Aquitaine in Boston.

Gabriel’s is known for its famous regulars, including Oprah, as well as its great food and congeniality to neighbors and visitors alike. The restaurant is 23 years old, and some of its popular dishes have almost as much longevity. In taking the helm in the kitchen, Wall is stamping his own style on the menu.

Epoch Times: What are you changing on the menu?
Mr. Wall: Really, it’s about keeping the soul that the restaurant has but making it a little bit more modern and of my own, more seasonal.

For example, one dish we had forever was the spicy braised goat, in tomato sauce. It tastes good, but it still left you wanting something.

So I took the idea of turning it into a ragu and making it with pappardelle pasta and folding in warm goat cheese at the end so it has a play of goat meat with goat cheese together. Not to be considered a duo but from the same animal together on one plate. So far it’s been a hit. Everybody’s really enjoyed it. I have a small love affair with it. I eat it when I can.

As far as pastas, we had the gnocchi with tomato basil for the longest time. I mean, everybody likes tomato basil and there’s no thing wrong with it. But we introduced gnudi [gnudi is similar to gnocchi, but is made with ricotta instead than potato, and so lighter and more fluffy] with a pistachio pesto and sundried tomatoes, and so far it’s been pretty good. The cooks love gnudi because it’s a little quicker to make and a little bit more consistent.

Epoch Times: What’s your cooking philosophy?
Mr. Wall: My philosophy is still building. I’m still learning. My style really is about fresh, local, seasonal ingredients. I have a lot of New England influence. I’ve spent most of my life up and down the East coast, from the Keys to Maine.

There are a lot of [bad] things going on with the food industry that either people don’t know about or don’t see as a problem. In Europe genetically altered food or GMOs have to be labeled. If you have a cloned animal, it has to be labeled on a supermarket shelf. In this country none of that stuff is labeled.

The food is real obviously but it’s kind of like Frankenstein food at this point. They’ve been tweaking with plants this whole time, and the consequences of what that might to do to somebody over time, nobody has really looked into or cared enough to look into. That’s been shoved under the rug so many times.

Epoch Times: Where do you source your ingredients?
Mr. Wall: Mostly farms from upstate New York. This New Year’s we’re getting some lobsters from Maine, shipped overnight, from old friends of mine.

Everything you buy, you can’t buy it all the way you want it to. Maybe the French Laundry is doing 100 percent organic. I don’t have the means to do that but we try to do the right thing when we can. It is expensive. Good food isn’t cheap.

Epoch Times: What’s it like working with Gabriel? [the restaurant’s owner and namesake, Gabriel Aiello]
Mr. Wall: Gabriel’s a great guy, a good businessman. This is his livelihood, he’s very passionate about what he does. He owns it, and when I say he owns it, I mean he takes full responsibility for everything that happens, and that’s very rare to find in anybody. The last owners I worked for, they looked to the restaurant as their piggy bank. They weren’t very involved. Gabriel’s really here for it. He takes everything personally.

The other day we had a party, and two coats got mixed up. There were 130 people, and two of the coats got switched because they looked very similar. One was a mink, the other was a faux fur. Somebody took the mink and walked out. The person who owned the mink an hour later goes, ‘This is not my coat.’ It was 20 degrees out and they left without a coat. It was just a bad situation. The next day Gabriel calls everybody find the coat, takes a cab to the person’s house, brings the coat to the person’s house, totally handled the situation himself. Who does that? No owner in the world does that.

Epoch Times: What’s your leadership style in the kitchen?
Mr. Wall: You can get the most of your staff with a kind word and general encouragement. My theory on leadership is this, you’re not going to get yelled at if you do something wrong that you didn’t know was wrong. If you purposely do something that’s incorrect and you know better, you’ve crossed the line. It’s not a mistake. But if you made an honest mistake, then it’s an honest mistake and you learn from it and that’s really the point.

Every day challenges happen, It’s about managing mistakes and making things work. It’s putting out fires. You can’t let the ship go down, you have to patch the holes.

I have a deaf line cook. Communicating with him is a mutant form of sign language along with odd gestures. I have to show him everything step-by-step. He doesn’t speak English, he reads Spanish. How do I communicate with this human being?

It’s about how you come up with solutions to things. A chef I used to work for at a golf club said, “Anyone can get into trouble. It’s how you get out of trouble that makes you a professional.”

I used to be impulsive. When I was young, I was very overly critical. Now, it’s about patience.

Epoch Times: Do you cook at home?
Mr. Wall: I do cook when I’m off. I stick to one-pan items, like I’ll roast a chicken with vegetables in a cast iron pan. I don’t want to scrub anything at home, I don’t want to do dishes. It’s a game of chess to make as little dishes as possible at home and still make something that’s delicious. Cast iron pan—it’s great. you clean it, season it, and put it away. You don’t have to sit there and scrub it.

Epoch Times: What’s your favorite ingredient to play with right now?
Mr. Wall: I like the smell of truffle honey. I think Yankee Candle needs to make a honey truffle candle. I keep suggesting it to them. One day, they’ll listen. That, and candied bacon is my favorite condiment at the moment.

Wall is crafting a menu for New Year’s Eve and New Year’s, including Maine Lobster Tourist Drunk & Naked in Columbus Circle, which will be poached in butter, served with sunchoke, arugula, pine nuts, roast potato, and champagne sauce. One of the meal’s finales is a Lemon Study, for two, an “all-lemon, all the time” dessert including limoncello pana cotta, basil gelato, and Meyer lemon bar. He’ll be playing with some dry ice to turn lemon juice into a fog, enveloping diners with the scent of lemon as they dig into the dessert.

Using a heavy-bottom saucepan, render the pancetta over medium heat until crispy.
Add shallots and mustard, cook until shallots are soft and the mustard has slightly browned.
Deglaze the pan with the vinegar and remove from heat, stir using a wooden spoon.
Continue to stir in the olive oil and set aside in a warm place for immediate use or cool and store for later use.

Clean and remove stems from mushrooms.
Using a large bowl dress the mushrooms with oil, garlic, salt, and pepper.
Set mushrooms on a baking tray and roast at 400F for 10 minutes.
Allow them to cool and slice them thinly on a bias.
Combine mushrooms with dressing, allowing them to marinate.

Salad Assembly
In a large bowl combine baby kale greens (or substitute baby spinach) and dressing.
Note: The dressing should be warm enough to soften the greens but not hot enough to cook them down. After plating, garnish with over-easy fried egg and croutons.