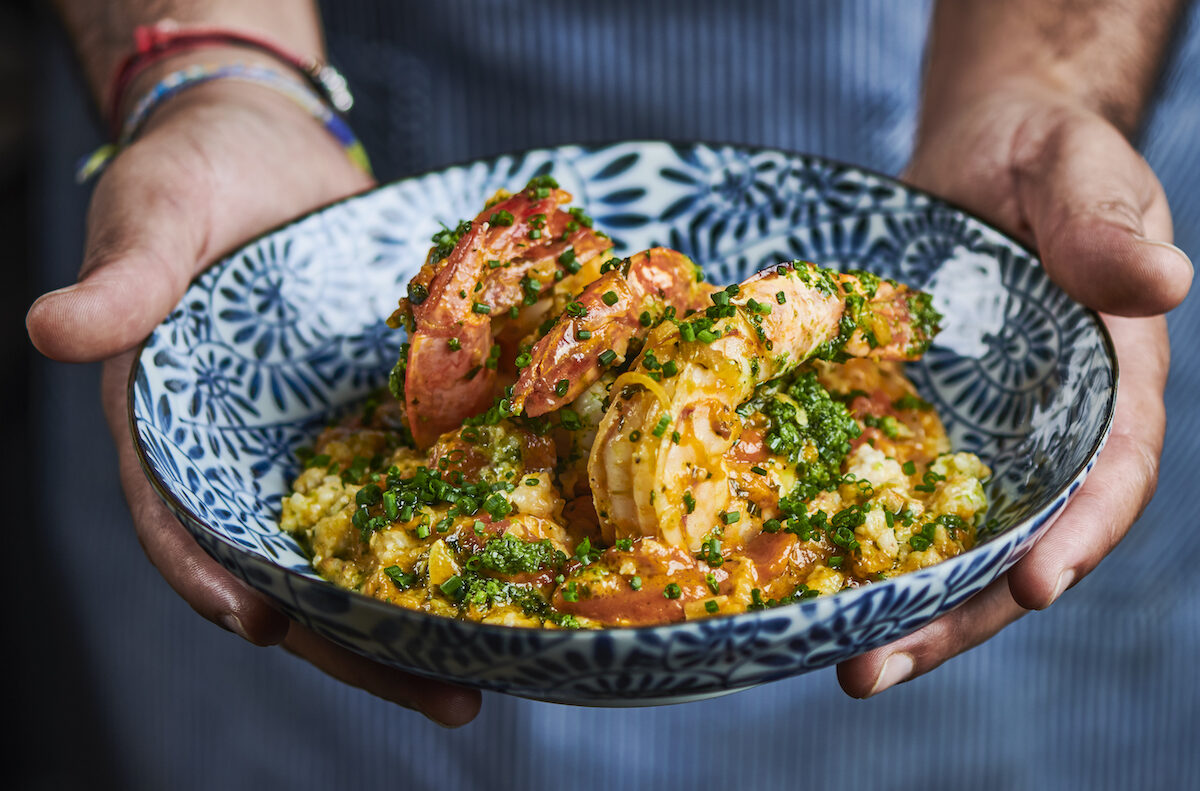 At Mamey, named after the tropical fruit, the island-themed menu is inspired by Patel's travels around Asia, Polynesia, and the Caribbean. (Courtesy of Alpareno Restaurant Group)
Food

The ‘Green-Thumb Chef’: Niven Patel Takes ‘Farm-to-Table’ Into His Own Hands

At his trio of acclaimed Miami restaurants, the rising chef serves globe-trotting fare with homegrown produce, meticulously curated, cultivated, and harvested at his own farm
BY Nick Dauk TIMEJuly 18, 2022 PRINT

A cook sliced into an heirloom tomato and threw half of it in the trash.

It was a thoughtless act committed routinely in kitchens around the country—but chef Niven Patel saw it as an opportunity to teach his team about the effort required to grow and harvest ingredients.

“Do you know how long it took to grow that tomato?” asked Patel, now head chef of three Miami restaurants: Orno, Mamey, and Ghee Indian Kitchen. His cook, not unlike many restaurant employees and much of the general dining public, hadn’t a clue.

Patel invited his team to his then-new, two-acre property in Homestead, Florida—where he and his family live—where they trenched through limestone to run irrigation, built raised crop beds, and planted thousands of seeds. That was six years ago. Neither Patel nor his cooks were professional farmhands, but, as the years passed, Rancho Patel grew from a gratifying team activity into the embodiment of everything Patel does in his restaurants.

This hands-on approach was inspired by Patel’s time running a restaurant in Grand Cayman that had its own dedicated fishing boats and farm plot. Now, with the help of a full-time farmer, he grows everything, from the Thai basil on Mamey’s plates to the Sungold tomatoes used at Orno, at Rancho Patel.

“The farm is special to me because I am fully involved in the harvesting process—from seed to plate—of all produce grown [there],” Patel said. The bedrock of their culinary ambitions features dozens of fruits and vegetables from countries including Syria, India, Brazil, and Italy, grown from seeds he’s collected on his travels or been gifted by other travelers.

Patel also invites others to join him for backyard feasts throughout the year.

“‘Sundays at the Ranch’ was originally my test kitchen for [my first restaurant] Ghee’s menu,” he said. “I would randomly invite a dozen people to the farm to taste my ideas. Today, we bring as many as 100 out, prepare a feast, and show them where our restaurants’ cooking truly begins.”

Mohamed Alkassar, Patel’s business partner and chief operating officer of Alpareno Restaurant Group, which they co-founded, was far from surprised when Patel invited strangers into his home for these unique dining experiences.

“He’s a green-thumb chef,” Alkassar said. “Niven lives on his farm and harvests his own produce. He runs a loving, zen kitchen, and his humble approach is contagious.”

Ghee Indian Kitchen was recently awarded a Bib Gourmand award in the Michelin Guide’s Florida debut; Orno also received a Michelin Guide mention. Patel and Alkassar are proud of these honors but noted that the recognition stems from their approach.

“We focus on good ingredients, flavors, and experiences,” Patel said. “If the awards happen, they happen.”

Favorite Country to Eat In: India

Favorite Country to Cook In: Italy

Favorite Indian Dish to Spin: Ponk, a snack made with green sorghum grains

Nick Dauk
Follow
Nick Dauk is an Orlando-based writer whose work has been featured in BBC News, Insider, Fox Business, and The Telegraph. He’s an avid traveler and can be found seeking out the world’s best street eats when he’s not curled up on the couch with his wife and son.
SHARE
Friends Read FreeCopyFacebookTweet
You May Also Like