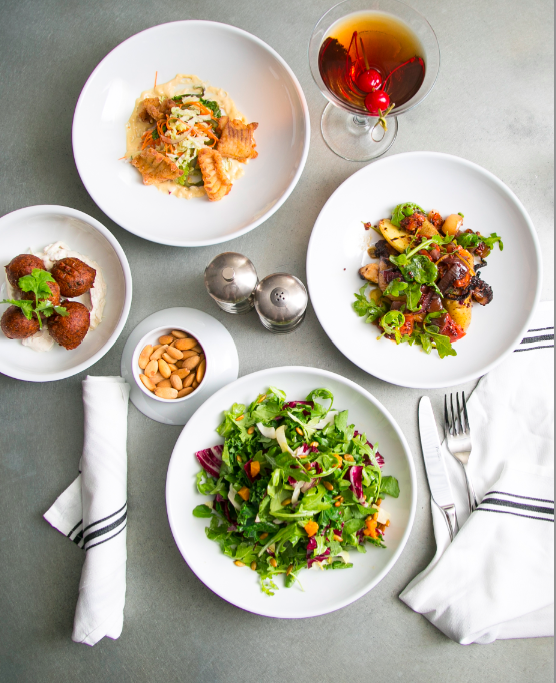 It was a dark and stormy night when I entered Chapter One.

It really was—one of those dark and dreary evenings where you wonder why anyone would ever venture out in miserable, cold rain rather than stay at home.

But the verdict after an evening there: It’s worth braving the elements for.

Self-styled as an American tavern, this 85-seat West Village spot is now more than a year old, with a focus on American whiskeys and a decor inspired from New York’s early days. About 80 bourbons and 50 ryes sit behind the bar.

To get into the spirit, grab a fiery Old-Fashioned made with 12-year-old bourbon, or a smooth Sweet Manhattan, mixed with rye and sweet vermouth ($14). Those partial to wine will also find wines by the glass by City Winery.

The first hint that there’s something special happening in the kitchen starts with the bar snacks: the smoked almonds and pork rinds are made in-house.

This is Warren Baird’s first go as executive chef, after some time in fine dining kitchens, including two years at Esca.

At Chapter One, the key concept is not fine dining but rather approachability—the kind of place where you would loosen your tie after work, or wouldn’t hesitate to take a date or your family in a low-key atmosphere (and I did see all these cases when I went).

The dishes are inventive, with flavors and textures that work well together, but never enter the realm of the abstract or become the kind of food that might feed your intellectual curiosity rather than your appetite.

Baird said, “I’ve worked in kitchens with highly refined food and with modern contemporary techniques and equipment and it’s all very fascinating,” But, he added, “I never want to lose that connection with food that people have.”

The cuisine is American, which also means plenty of influences from varied cuisines.

You could spend your entire time grazing on snacks and starters and be completely happy.

For the simplest of all, a Fall Salad ($9) stands out for its freshness with a cider vinaigrette that is unusually good. This being Baird putting it together, something has to be made from scratch, so he reduces a gallon of apple cider to use as the base for the vinaigrette.

The Octopus ($17), braised in red wine and aromatics, is very tender. Confit potato, dried tomato, Meyer lemon, and mustard oil round out the dish.

As with the starters, the menu for the entrees is not long, but each dish is intriguing and calls out to be tried. The prices range between $17 for a burger and $38 for short ribs (smoked in-house).

A corner of the restaurant features a blackboard displaying the origin of the meat and fish. Outside of the beef, which comes from Nebraska, all else comes from the northeast, from the Amish country chicken to the scallops from Barnegat, N.J.

I had the only vegetarian entree on the menu, root vegetables filling out a buttery tart crust, with creamy goat cheese ($19). It was very good, a delicate medley of textures and tastes, but also modest in size—smaller than some of the starters.

The Classic Duck Confit ($22) paired with a slightly sweet maple rutabaga purée, and a cascade of curly sweet potato fries, was another take on fall. It was a heftier dish; its highlight is the crispy skin. With the fat rendered out, “by confit standard, it’s relatively lean,” according to Baird.

With a daily special, Baird took the Mediterranean route with a branzino and added on farro and roasted peppers—this time a nice escape from the season into sunnier climes.

Unlike some restaurants where perhaps the economics of the kitchens or the chef’s own preferences may mean that you encounter similar flavors here and there on the menu, Baird’s offerings are all distinctly different.

Chapter One doesn’t have a pastry chef, so Baird devises his own desserts that can be plated fast and without fuss, simple but full of satisfying flavors.

It’s entirely worth saving some space for the apple fritters ($10). They feel not like one dessert, but like many desserts in one, with their well-executed components. Macoun apples from upstate are fried in an IPA (India Pale Ale) batter and paired with sea salt caramel ice cream and walnut streusel. In the realm of dessert, if this doesn’t say “fall,” I don’t know what does.

Well, except maybe another of Baird’s seasonal desserts, a parsnip cake ($9). Think carrot cake, but much better.

Parsnip, as Baird explained it, “is sort of an upgraded carrot. Carrot has a pretty linear flavor. So you just take parsnip, which has this floral, spicy edge to it.” This, too, meets a perfect complement in a goat cheese fondue.

Baird is a chef to keep an eye on. He is creative and pays attention to detail but also has the clear-sightedness to have his food connect to diners in an approachable way.

As for Chapter One, it is like a good book. It keeps you wanting more, and it’s worth enjoying, slowly.