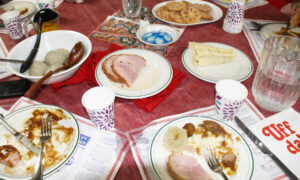 Everything but the Lutefisk: A Norwegian Dinner in Montana
0
Share Now
FacebookTweetParlerEmail
Copy Link 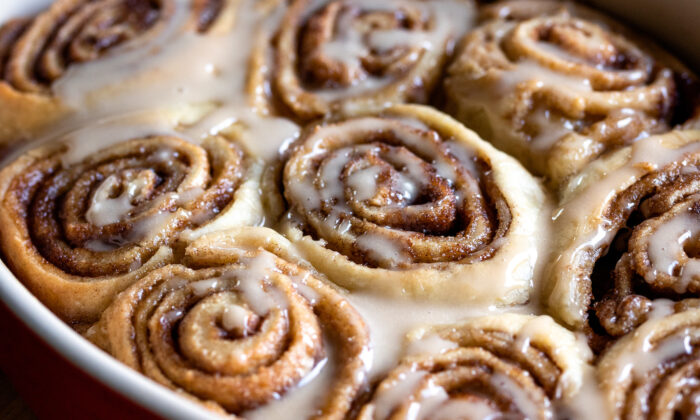 There are plenty of things I look forward to on Christmas morning: the look on my daughters’ faces when they see the presents under the tree, pulling back the curtains to see if it has snowed, the thought of the entire day with only my family stretching out before me.

But without a doubt, what I most eagerly await are my husband’s Celebration Cinnamon Rolls.

When the morning finally comes, my two daughters excitedly inspect the pile of wrapped presents, while Andrew plays Christmas carols from the Oxford Trinity Choir over our speakers and puts his apron on. I read books with my girls next to the Christmas tree’s lights, while Andrew rolls out a dough, which has risen all night in the fridge, into a large rectangle that spans the width of our kitchen island.

Inevitably, the girls are drawn into the kitchen to “help.” They lug our kitchen chairs over to the counter, and sprinkle sugar and cinnamon over the dough to the tune of “Angels We Have Heard on High.” They roll the dough into a log, and slice it into apple-sized swirls that, in about an hour, will taste like Christmas itself. By the end of it, they’re all covered in flour.

While the rolls rise again in the baking dish, Andrew cleans up the kitchen. The girls squirm, anticipation building, as he wipes the counter and I set the table with candles and my good china. When the house is clean and the dough has risen, the cinnamon rolls are ready to go in the oven. They fill the house with the scent of celebration as they bake, while our daughters open their stockings and we sip our coffee near the fire.

Finally, we gather around the table, with all our Advent candles lit, to enjoy our Christmas breakfast together. The sweet, gooey dough, smothered in maple icing, always stirs in me feelings of home and belonging.

The Making of a Family Tradition

My husband has brought a long list of beautiful things to our marriage, but his Celebration Cinnamon Rolls might be one of the best. For every family birthday and Christmas morning, Andrew labors over the rolls, somehow never burning the milk and always perfecting the yeast mixture so the dough rises just the way it should.

My daughters have started to anticipate when a special day is coming up. When Andrew opens the pantry door and starts pulling out the flour and sugar, they ask, “Oh, is it a Cinnamon Roll day?”

The first batch of Celebration Rolls was made just a few months after our wedding. I had recently bought a cookbook from The Pioneer Woman, which featured her recipe for Orange Sweet Rolls. Up until this point, I had only ever had store-bought cinnamon rolls, and had never been impressed: they always were too hard or dry. But these looked good enough for a second try, so I bookmarked the page to return to at another time.

Two months later, I woke up on the morning of my birthday to the smell of sweet bread baking, filling our tiny basement apartment. By the time I made it to the kitchen, Andrew was pulling a tray of puffy orange rolls out of the oven. When I tasted them, I immediately took back everything I had said about sweet rolls in the past, and Andrew, who loves to research and tweak recipes, made it his mission to create his own version of the treat.

After many variations and iterations—all of which I was happy to indulge in—Andrew finally perfected his Celebration Cinnamon Rolls a few years ago. His are packed with cinnamon and brown sugar and topped with maple icing. Far from being dry or hard to eat, they’re tender, flavorful, and perfectly gooey. Molten cinnamon-sugar oozes out with every bite.

He made them again on Thanksgiving morning a few years ago, while my sister and her family were visiting. We enjoyed a long, lazy start to the day, drinking pots of coffee and working our way through the dish of warm, buttery rolls.

A Labor of Love

Since then, these rolls have been the star of our celebration mornings. They are a labor of love, which is exactly why I think Andrew loves to make them. Andrew shows his care for people through doing nice things for them, and the cinnamon rolls exemplify who he is so well. He delights in celebrating people in a way that provides them with both tasty food and an opportunity to gather together around the table.

On Christmas morning this year and for many years to come, I hope my girls will remember the way their dad woke up early to knead, roll, and bake, to bring them to the table with a special, delicious breakfast. I know I will.

For the Maple Icing

The night before, make the dough: In a large saucepan, heat the milk and vegetable oil over medium until it is about 110 degrees F (the milk should be warm but not hot to touch). Take care not to burn or boil the milk, as this will kill the yeast and prevent the dough from rising. Remove from heat.

Sprinkle the yeast on top of the milk and let it sit for one minute. Add the sugar and stir.

Add the flour and stir until just combined. Cover with a clean towel and let sit in a warm place for 1 hour. The dough should be about 1.5 times the size it was to begin with. (It’s OK if the dough doesn’t rise quite that much; as long as it has a puffiness to it, it should be alright. It will rise more overnight.)

After 1 hour has passed, add in the baking powder, baking soda, and salt. Stir thoroughly with a wooden spoon to combine.

Transfer to a bowl and cover with plastic wrap. Let sit overnight in the refrigerator.

In the morning, shape and bake the rolls: Grease a 9- x 13-inch baking dish (or use two smaller ones to save one for later!) and lightly flour a flat working surface. Roll out the dough into a large rectangle, about 10 x 15 inches, with the longer edge closer to you.

Mix together the melted butter, sugar, and cinnamon. Spread it over the rectangle, taking care to cover every inch of the dough.

Beginning at the edge farthest away from you, roll the dough tightly towards you. You will end up with a log. Slice the log in 1/2-inch increments. Arrange the rolls in the prepared baking dish(es) and cover with a tea towel. Let rise for another 20 minutes. The rolls should rise slightly and have a puffy look to them.

Bake the rolls for 18 to 20 minutes, or until golden brown.

While the rolls are baking, make the icing: Combine powdered sugar, maple syrup, milk, and vanilla extract in a small bowl and whisk until glossy. Add more sugar for a thicker consistency.

When the rolls come out of the oven, spread the icing over them while they are still warm.