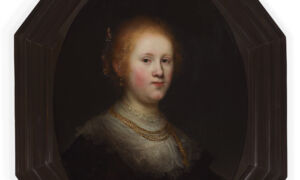 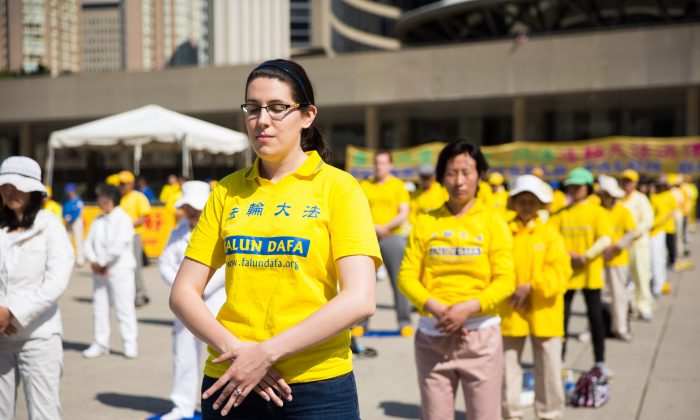 Celebrating in the Face of Persecution

TORONTO—Today is a time to rejoice for these few hundred meditators who have gathered on Nathan Phillips Square, people who believe they’ve found the law of all things—truthfulness, compassion, and tolerance.

This upbeat group of Falun Gong practitioners believe these three words are the line between good and bad, benevolence and cruelty. The believe that cultivating themselves by these principles and validating these principles is a path to enlightenment and a guide to humankind. There have been people who have found that odd, especially when these meditators face jail, torture, and death for refusing to denounce their belief.

For many years, these meditators and the millions like them around the world were somewhat alone, facing violent repression that few outside China understood or cared about. That’s not the case today.

“You are humble, you are unselfish, and you are the strongest people in the world,” said Jack MacLaren, an MPP in Ontario’s Legislative Assembly.

You are humble, you are unselfish, and you are the strongest people in the world.
— Jack MacLaren, Member of Ontario's Legislative Assembly

It was MacLaren’s first time to come to this annual celebration in Toronto, part of nationwide and worldwide events marking World Falun Dafa Day. Officially, World Falun Dafa Day is May 13, but this year’s public festivities in Toronto were held on May 17. May 13 is the day 23 years ago that Falun Dafa, also called Falun Gong, was first introduced to the public in China in 1992. Similar events were held in other cities across Canada these past two weeks, including Ottawa, Montreal, Winnipeg, and Vancouver.

Under China’s communist regime, Falun Dafa practitioners in China face persecution for refusing to abandon the practice, or worse, for exposing the imprisonment and torture they are subjected to.

“I am from Ottawa, I came here today to spend this time with you. It is an honour and it is a privilege,” he said.

“You have the wonderful values of truthfulness, compassion, and tolerance,” he noted.

“You are humble and you are unselfish, and why would anybody be threatened by anyone who has those values? Those are wonderful values, they are Canadians values, and I would say they are international values of good people across the world.”

It hasn’t always been the case that people understood Falun Dafa or Falun Gong so well. In 1999 when the Chinese regime began a violent and systematic campaign to stomp out the practice, the world’s media repeated the lines doled out by the Chinese Communist Party (CCP). First impressions tend to stick, especially when people have no personal experience with those being talked about.

Repetition helps, so does complete control over the media. Canada’s leaders might now better understand what Falun Gong is, but the same is not true of many Chinese in China today. The regime there has 60 years of experience in creating hatred against those who think differently. Past campaigns turned traditional Chinese faiths like Buddhism and Daoism, which permeated the society for centuries, into shadows of their previous selves, with the shape but not the essence of those beliefs.

Senator Thanh Hai Ngo understands better than many what Falun Gong practitioners are going through, having lived through something similar in his homeland of Vietnam decades ago when his family fled following the fall of Saigon to the communist Viet Cong.

While it is hard for many to understand why the Chinese regime would arrest people for dedicating themselves to virtues like compassion and tolerance, Ngo said it’s simple.

In his remarks, MacLaren said he thinks that simply having beliefs is unsettling to the CCP.

“You dare to have your own beliefs that you are going to stick with and you are not going to be deterred or give up what you believe in,” he told the assembled practitioners.

“When I stand with you, I stand with very strong people, with very brave people, and I applaud you for what you are doing. You are making a difference.”

“You will succeed. … It will be my privilege to stand with you until that day.”

Many Canadian elected officials have expressed that belief. At the federal level, they’ve formed a group to embody that support, the Parliamentary Friends of Falun Gong. It includes members from all parties and is chaired by Conservative MP and former minister of the environment Peter Kent.

Kent comes to many Falun Dafa celebrations, including the one that was held in Ottawa last week where some 15 MPs came to speak and 10 ministers sent greeting letters, including Prime Minister Stephen Harper.

“Falun Dafa has brought spiritual fulfillment and good health to millions of people all around the world, mental and physical wellbeing through gentle exercises, through the meditation, and through the virtues of zhen, shan, ren—truthfulness, compassion, and tolerance,” said Kent.

He noted that Canada “regularly and consistently” calls on the Chinese regime to respect the fundamental rights of all Chinese people, including Falun Gong practitioners.

“Whenever ministers meet the Chinese leadership, whether in China or in Canada, or anywhere around the world, our government raises the issues of freedom, democracy, human rights, and the rule of law,” he said.

Current efforts include using diplomatic channels to free Li Xiaobo, a Falun Gong practitioner who is father to Canadian citizen Paul Li. The elder Li was recently sentenced to eight years in prison for sharing information about Falun Gong and the persecution its adherents are suffering in China. He was previously sentenced to an eight-year prison term in 2005 for writing articles to speak out against the persecution.

“Falun Dafa practitioners in Canada are law-abiding citizens and residents who have contributed greatly to Canadian society. Our government believes that China, like Canada, should ultimately benefit from greater freedom, compassion, and toleration,” said Kent.

It’s a simple enough declaration, one that more elected officials make every year. Some of those here today have been making it for a very long time. Former Senator Consiglio Di Nino is one of them.

China still has not seen the light, said Di Nino. Fundamental rights like the freedom of belief and free speech remain repressed there, but he was hopeful, he said.

“There seems to be a little bit of light in that tunnel.”

That light comes from the new leadership in China under current regime head Xi Jinping, who despite not yet ending the persecution of Falun Gong has been purging and prosecuting officials central to the persecution.

“They are now being dealt with by the law and that is good news. I believe that your message is being heard and that your persistence is paying off.”

“I also believe that you will succeed, you will succeed ladies and gentlemen, because your cause is just. You are not asking for anything other than fundamental principles.”

Federal MP Brad Butt has been coming to lend his support at Falun Dafa Day in Toronto and Ottawa every year.

He said one of the greatest things about Canada is that it is a multi-faith country, one where tolerance is a part of its character.

“So we have to stand up for these Canadian values and export Canadian values to countries like China and say to them, ‘You can be a successful country and still respect people’s faiths.’ And that is the message that we send today by all of us being here.”