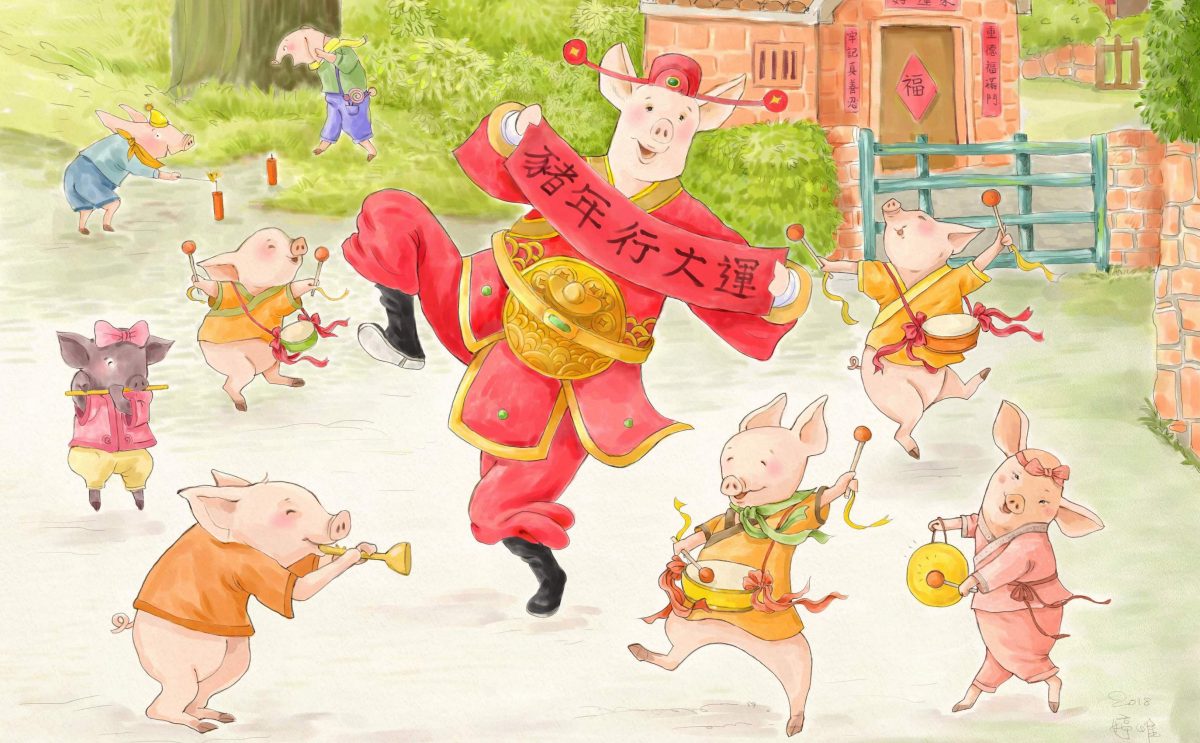 Celebrating Chinese New Year 2019: The Year of the Pig

The Chinese New Year  is celebrated on Feb. 5, marking the beginning of the year of the Pig in the Chinese zodiac.

It is a time for reflection, for resolutions, and new hope in the year to come. Some believe the year of the Pig will bring wealth and prosperity.

According to the traditional Chinese lunar calendar, the first day of the Chinese lunar year may fall anywhere between late January and the middle of February.

The Chinese lunar calendar incorporates both the lunar cycle and the position of the sun. According to legend, the calendar dates back to 2600 B.C., when the mythical Yellow Emperor started the first cycle of the Chinese zodiac and named an animal to represent each year in the 12-year cycle.

Pig is perhaps the most complex symbol, since it has both positive and negative elements. The positive elements are wealth (symbolized by the piggy bank), good fortune, friendship, patience, popularity and peace.

Pigs are associated with stupidity in both Eastern and Western cultures. In English, the word “Pigheaded” means stupid or stubborn. In Chinese, the word “pig head” is used when scolding at someone who is stupid. The Pig represents negative personality traits such as being stubborn, careless, absent-minded, disorganized and mischievous.

The Chinese people believe the year of the Pig will bring wealth and prosperity. Besides having a stable income, they hope to make more money, and some believe it is an auspicious time to make new financial investments.

The year of the Pig is expected to bring joy, friendship and love for all the zodiac signs as the Pig attracts success in all the spheres of life.

Chinese New Year is the most important of the traditional Chinese festivals. The celebration usually lasts 15 days, from New Year’s Day to the Lantern Festival, which is the 15th day of the first month of the Chinese lunar calendar.

There are many traditions and customs associated with the Chinese New Year. Families thoroughly clean their homes in order to sweep away any ill fortune and to make way for good luck. Windows and doors are decorated with delicate red paper cutouts and poetic couplets—pairs of corresponding lines of poetry that express people’s joy and hope for the New Year.

Fireworks, firecrackers, red packages, the lion dance, the dragon dance, and lanterns with riddles are other common customs and traditions observed during the Chinese New Year period.

Many families gather for a big family reunion dinner on New Year’s Eve, and the Chinese people also visit their relatives as part of the New Year celebration.

Couplet Verses or Chinese New Year Couplets, Chūn Lián (春聯) in Chinese, are an important part of the New Year celebration. Also known as antithetical couplet, it is often in traditional style and reflects hope, peace and prosperity for the year to come.

Chinese couplets are usually a pair of successive lines of verse, especially a pair that rhyme, and the number of characters in each line is the same. The structure is very strict and well-defined.

The first line is the “head” and the second line is the “tail.” In a couplet, a balance must be found between head and tail, between each character in one and the usually contrasting character in the same position in the other, and in tone, rhyme, and meaning.

A horizontal streamer (橫披, hénɡ pī), which normally has four characters, is added above the entrance and between the two vertical streamers to indicate the theme of the couplets.

The founding emperor of the Ming Dynasty (A.D. 1368–1644), Zhu Yuangzhang, issued an order before the New Year’s Eve requiring every householder to write couplets on red paper and post them on entry door frames to welcome the New Year.

In the morning of the New Year, the emperor dressed himself in plain clothes and went door-to-door reading the couplets. Whenever he saw well-written scrolls, he was very happy and praised the writers’ talent.

With the emperor’s advocacy, the tradition of writing New Year couplets became a custom that has been continued to the present day.

Couplet Verses for the Year of the Pig: