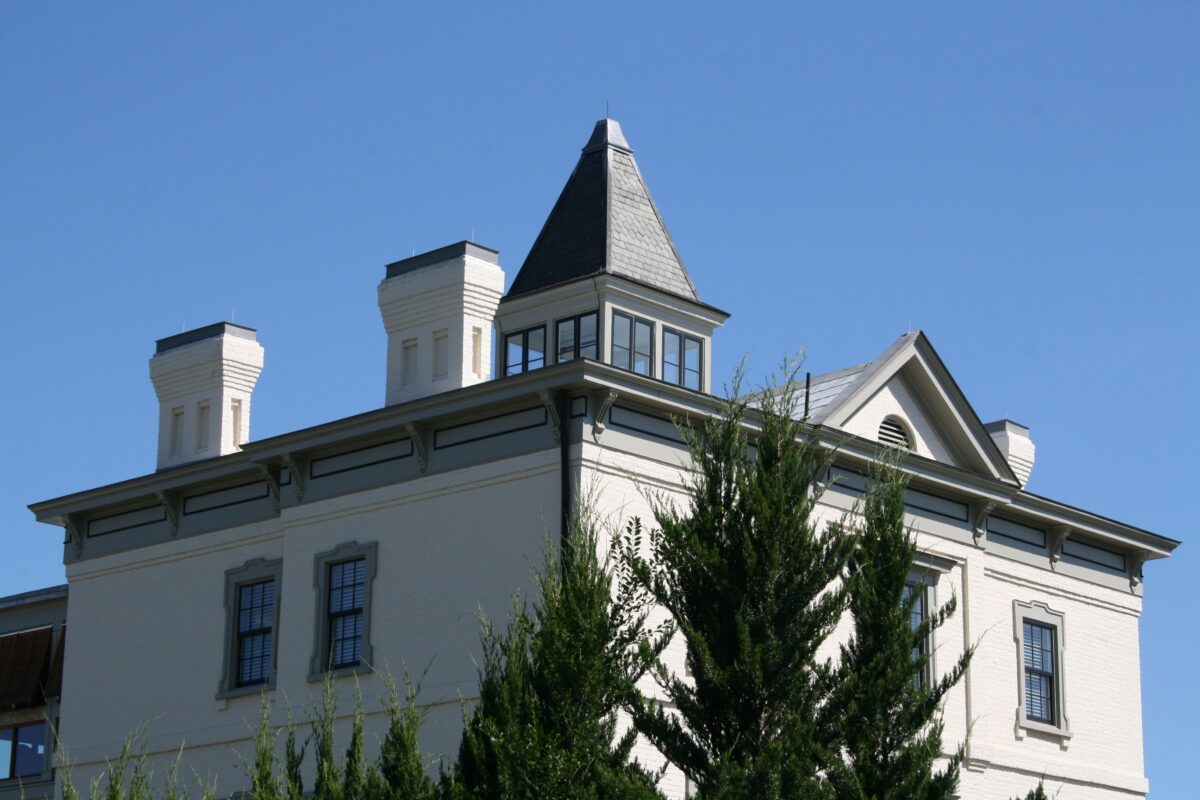 Celebrating Bonds That Reunited America: The History Behind the Robinson House

To-day gladdens the hearts of all true Americans, the spectacle of a re-united country, knit together in real brotherhood of its citizens and in the bonds of an honorable, cordial and lasting pacification—and not least, the spectacle of veterans of the Army of the Potomac joining hands with veterans of [the] Army of Northern Virginia, to establish, as we here to-day establish, this “Lee Camp Soldiers’ Home.”

—Colonel Archer Anderson, Address on the opening of Lee Camp Soldiers’ Home, May 20, 1885

Richmond’s Robinson House, like many venerable Virginia homes, has stood as a witness to much history. This is the story of a house that from its humble beginnings in 1828 grew to become the three-story edifice it is today. It stood through our nation’s most bitter domestic conflict and became a key element in a beautiful story of reconciliation—a home for indigent and disabled veterans of that fierce conflict. The house’s namesake, Anthony Robinson Jr., originally constructed a simple summerhouse for his family amid a beautiful stand of oak trees known as The Grove.

Robinson, an officer of the Bank of Virginia, was married to Rebecca Webb Couch, who grew up in Goochland County, Virginia. Couch’s parents were members of the Society of Friends (Quakers) who had moved to Goochland from Philadelphia and had freed their slaves. When she married Anthony, Rebecca became the mistress of slaves. The enslaved workers were most likely some of the craftsmen and laborers who helped build and advance the house. The property eventually developed into a 160-acre farm, and the Robinsons also grew to be a family of 11 children. The simple cottage was enlarged and rebuilt in the Italianate style in the 1850s. Around 1860, the Robinsons sold their city house and made The Grove their full-time residence.

Anthony Robinson died on June 28, 1861, as the Civil War was beginning. He left Rebecca 48 acres and divided the rest of the farm among his children. His sons Samuel, Starkey, and Edward served in the Confederate Army. Another son, Channing, was unable to serve because of a disability and became a clerk for the War Department. He would become his mother’s primary caregiver since the war had devastated the family financially. During the final weeks of the Civil War, Union troops occupied the house and grounds at the invitation of Mrs. Robinson in exchange for protection from looting.

After the evacuation of Richmond … an encampment was established on the grounds by a division of the Union Army. The servants’ quarters and the home were freely invaded by the soldiers and the situation was dangerous. … Our grandmother dispatch[ed] a manservant to the commanding general with a request that he establish his personal quarters in the home. …Years afterward my sister met the nephew of this general [who] heard his uncle’s stories … of the charming lady who’s stately courtesy was unfailing to her wartime guest.

Like many families caught up in the war, the Robinsons had children living in both the Union and the Confederacy. Two daughters, married to Northerners, lived in the Philadelphia area. No doubt, Rebecca still felt ties to the Society of Friends there as well.

The Union forces, led by Major General Godfrey Weitzel, occupied Richmond and were saddened to see the city burning and the distress of the people. Looting was probably the last thing on the occupying soldiers’ minds. Weitzel, a German immigrant, led the first Union forces into the city. One of the first things they did was to organize citizens to put out the fires, which had spread as the retreating Confederates torched warehouses full of munitions and stores. Weitzel’s troops joined in the firefighting efforts. President Lincoln and his young son, Tad, personally visited the city two days after its capture in a gesture of peace. When Rebecca Robinson died on July 4, 1879, she left Channing The Grove, which he sold to the R.E. Lee Camp, No. 1, Confederate Veterans organization in 1885.

As the veterans of the conflict grew older, many were concerned about the fate of their fellow soldiers who were destitute and disabled. Wishing them to be spared the fate of ending up homeless or in the Richmond Almshouse, they organized the R. E. Lee Camp to raise funds for proper care. The veterans found an unexpected yet steadfast ally in Phil Kearney, Post 10 of the Grand Army of the Republic (an association of Union veterans living in Richmond). Kearney proposed an appeal to the Grand Army of the Republic units across the country; a letter was sent to these chapters nationwide. Officers of Confederate and Union veterans’ organizations toured the Northern states together—the response, being “swift and generous,” was astounding. General U.S. Grant is reported to have chipped in $500. A fundraising event in New York brought together veterans of both sides at Cooper Union as well as a benefit performance of the Metropolitan Opera. By November 1884, the funds had been raised for the purchase of the Robinson property. Lee Camp purchased The Grove from Channing and Judith Robinson for $14,000.

The home was opened for its first 16 residents on January 16, 1885. Donations continued to pour in—some from prominent donors such as Lewis Ginter of Richmond, William W. Corcoran of Washington, D.C., and William H. Appleton of New York. This generous funding allowed for the construction of additional cottages as demand increased. Prominent Richmond Architect Marion J. Dimmock, a Confederate veteran, designed 35 cottages that swept from the original house in a graceful arc. A chapel and a mess hall were also constructed. The complex and its grounds became a focal point for remembering and honoring the soldiers and hosted many gatherings of “Blue and Gray.” These events were popular and well attended—ending only as the veterans’ numbers decreased.

The former Robinson home was given its third floor addition in 1886. Richmond Architect Robert I. Fleming, a former Confederate officer, designed the decidedly Victorian addition with its tall belvedere, capped with a steep pyramidal roof and corbelled chimneys. Fleming carried the Italianate detailing into the third floor window design. The building was named Fleming Hall after its designer and housed offices for the camp, a residents’ library, and a museum that included Thomas Jackson’s horse Little Sorrel (stuffed). The upper floors served as quarters for residents and medical wards as needed. It was, according to resident Benjamin J. Rogers, “an ideal spot for an old ‘Confed’ to spend his declining years at.” Over its 56-year span of operation, the camp served over 3,000 veterans from 33 states, although the maximum capacity at any given time was around 300. The last resident, John “Jack” Blizzard, died on January 29, 1941.

In 1934, the state of Virginia designated the property as Confederate Memorial Park. The Virginia Museum of Fine Arts was given permission to erect its neo-Georgian main building on the campus in 1936. Though there were no more residents, Fleming hall remained open as the R.E. Lee Camp Museum until 1949, when its collections were given to the United Daughters of the Confederacy. Little Sorrel was moved to the Virginia Military Institute Museum. The building was home to the Virginia Institute for Scientific Research from 1949 to 1963, and it later served as offices, galleries, and studios for the Virginia Museum of Fine Arts.

The Robinson House is all that remains of the Lee Camp buildings. Today, the expanded Virginia Museum of Fine Arts and its parking structure surround it. The grove of trees is no more. In 2013, the house was named to the National Register of Historic Places, being one of the oldest buildings in the Boulevard Historic District of Richmond. The museum hired Glavé & Holmes Architects of Richmond to plan the recently completed renovation of the house into personnel offices, a city tourist information center, and a display of the history of the house. The architects added a ramped entrance from the parking deck, an elevator, and 3,200 square feet of additional office space. The modern addition is softened by Bermuda shutters, complementing the historic house.

The exhibit “Across Time: Robinson House, Its Land and People” is a permanent display celebrating the history of this unique place, where old enemies came together and healing returned after the fierce wounds of war. It is a place where many old soldiers, blue and gray, found peace, comfort, and reconciliation. Those who built and sustained it through this time of service, as the Lee Camp Soldiers’ Home, were Americans at their best!