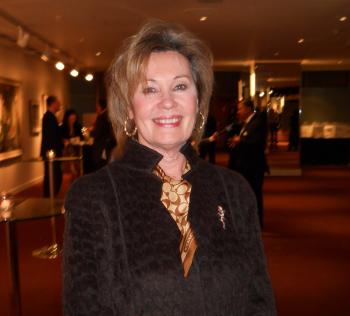 TORONTO—Vanessa Harwood, former principal dancer for the National Ballet of Canada, took in Shen Yun Performing Arts for the fifth year in a row, this time at Sony Centre for the Performing Arts.

After Thursday night’s Toronto debut, Ms. Harwood, principal dancer with the National Ballet from 1970 to 1987, again affirmed the discipline and skill of Shen Yun’s dancers. But this time she wanted to mention the music of the show as well.

“I always talk about the dance and never talk about the music, but it’s because I’m always so bowled over with that,” she said of Shen Yun’s synchronized dancing.

“But you know I love the erhu, I love it. So beautiful, isn’t it? So mystical and so romantic.”

The erhu is China’s two-stringed violin, an ancient instrument with a haunting sound and surprising range.

Ms. Harwood said a lot of work must go in to creating an entirely new lineup of dances each year, and she appreciated that, though she was also glad to see some familiar elements, like dances based on China’s Mongolian folk traditions.

“It’s a different performance every time. I was thinking there’d be something the same, but there really wasn’t. . . . It’s always different choreography, different costumes,” she said.

“So it was nice to see all different things. And then, I always loved Mongolian dancing. I don’t know why, I’ve got this thing for it. . . . The men in Mongolian dancing are very virile and strong and fabulous. And the tricks, I think the men were doing more tricks than before.”

Those tricks are some of the most challenging moves of classical Chinese dance, jumping and tumbling techniques once passed down in China’s royal courts and later borrowed to create what most people today know as gymnastics and acrobatics.

“There’s obviously a great deal of rehearsals in this, a great deal,” she said, adding that if there were any mistakes they would be glaring because of how so many dancers are performing the same move at the same time.

She added additional praise to many of this year’s pieces, including one featuring the fashionable ladies of the Manchurian court with their unique shoes, and another based on the Terracotta warriors of the Qin Dynasty.

“I remember seeing them at the museum here and then to see it incorporated into the show, it was very well done, I really liked it.”

She also enjoyed the humour of a dance based on a tale from the classic Chinese novel “Journey to the West” that depicts the mythical Monkey King tricking Pigsy after watching the portly character hounding a reluctant would-be bride.

Ms. Harwood, who has also worked as an actor, choreographer, teacher, and artistic director, was made an Officer of the Order of Canada in 1984 for her contributions to Canadian performing arts.