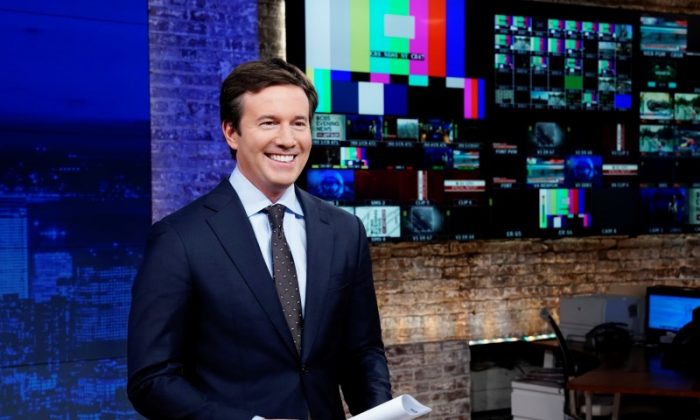 Jeff Glor on the set as he anchors CBS Evening News in New York on Dec. 18, 2017. (Gail Schulman/CBS News/Handout via Reuters)
Careers

NEW YORK—If you think you have big shoes to fill at work, take a moment to consider Jeff Glor.

Glor has now occupied that desk since late 2017.

In the latest of Reuters’ “Life Lessons” series, Glor talks about his unlikely route to the anchor desk, and the stories that changed him along the way.

Q: Growing up outside Buffalo, did you always have the journalism bug?

A: I know it sounds crazy, but I actually went to college as a dentistry major. I wasn’t sure what I wanted to do, so I thought I might take up the family dentistry practice. But then I took my first chemistry course, and there was just no way that was going to work.

Q: What did you give up? In order to pursue a journalism career?

A: Through my economics degree I had a job offer in New York to work for a big consulting firm. The pay would have been twice as much, compared to when I eventually started at a local TV station in Syracuse. At the time I had no other prospects, and no other options, but I turned it down, because I really wanted to go into broadcasting.

If you are getting into the business to make money, that may not be the best place to start from. There has to be a foundation of loving what you do, and then hopefully success will follow.

Q: What advice do you have for others whose industry is in turmoil, like journalism?

A: When I was graduating from college, a lot of people were talking about how the web was going to affect journalism. So there were a lot of questions 10 years ago, there are a lot of questions now, and there will be questions 10 years from now. I find the best strategy is to focus on the story in front of me, and handle it the best way possible. It’s fun to think about where the business might go, but my first job is the broadcast that night. All of that adds up.

Q: What causes are you supporting with your time and money?

A: I have devoted a lot of time and energy to literacy over the years. Reading means so much to me; it’s as important as air. It’s a fundamental part of my life, and I hope I’m passing that love along to my kids.

Typically I read five or six books at a time, right now including Jan Crawford’s “Supreme Conflict” about the Supreme Court, “The Two Koreas” by Don Oberdorfer, and “Six Days of War” by Michael Oren.

Q: Are you and your wife a good money team?

A: I would say my wife is the saver, and I am the spender. The back and forth works pretty well, so we are a pretty good team when it comes to figuring out what to spend money on. Usually, she tells me to stop spending so much on books.

Our big project right now is that we moved to the suburbs and are renovating a house together. It’s a process, and you make some interesting discoveries along the way, but it is just about finished. Somebody once told me, ‘Think about what you will spend on a renovation—and then triple it.’ If a husband and wife can talk about money and get through a renovation together, that is a good sign for a marriage.

Q: What life lessons do you pass along to your two kids?

A: We are trying to teach them about the importance of family, just like my parents did. In particular, I think one-on-one time is critical: No matter how big a family is, carving out time for each kid individually can be really special. I just want them to see me as dad, not the guy on TV.

Correction: A previous version of this article misstated in a photo caption the date when Jeff Glor was on the set as the anchor of CBS Evening News. The date was Dec. 18, 2017. The Epoch Times regrets the error.