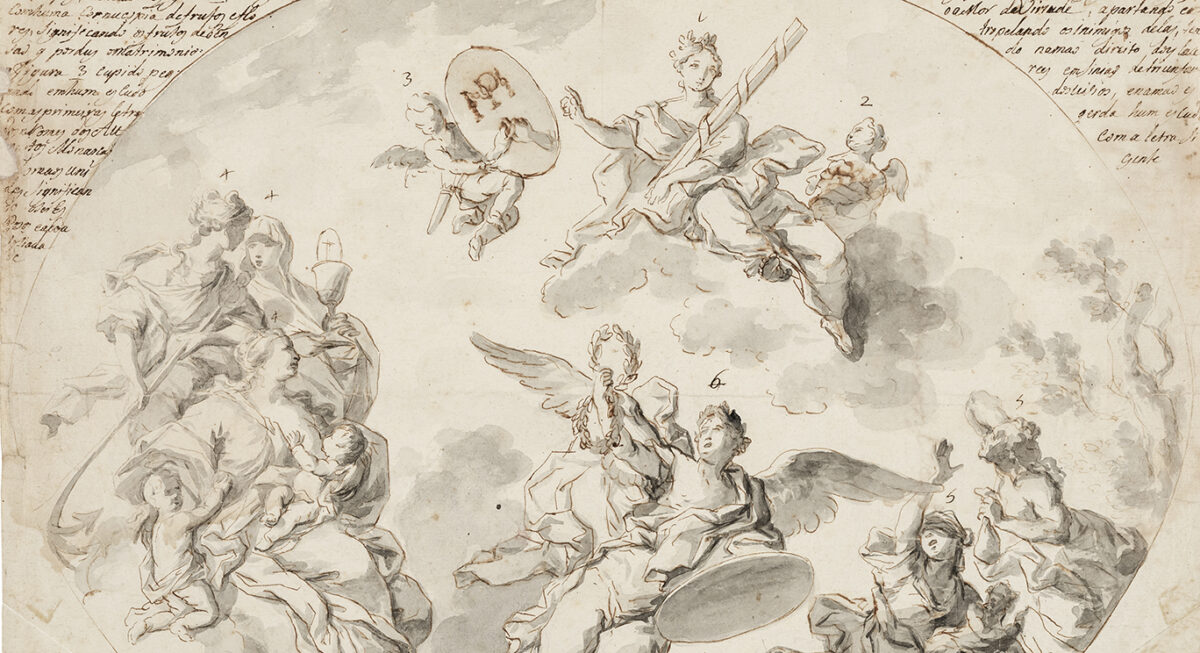 Cropped section of the drawing "Allegory to the Royal Wedding" by Pedro Alexandrino de Carvalho. Courtesy of the National Museum of Ancient Art in Lisbon, Portugal. (Public Domain)
Arts & Tradition

Portuguese artist Pedro Alexandrino de Carvalho (1729–1810) was not only a painter of distinction, but also a draftsman, and his drawings show how he helped to rebuild Portugal’s artistic heritage after one of its greatest disasters, the earthquake of 1755.

An exhibit of 17 of his drawings is now on display at the National Antique Art Museum in Lisbon, Portugal. The drawings in this exhibition are studies for his work on church ceilings and altarpieces, which demonstrate the painter’s unique style.

With an estimated 8.5 magnitude on the Richter scale, an earthquake occurred about 120 miles from the coast of Portugal on the Feast of All Saints, Nov. 1, 1755. The seismic event almost completely destroyed Lisbon and surrounding areas. Over 90 percent of buildings collapsed, were burnt by fires, or flooded by the tsunami that followed.

Carvalho was Lisbon’s most productive painter after the great earthquake. He helped the reconstruction by completing paintings in new structures, including palaces, churches, and schools. He also helped reconstruct Portugal’s capital through his murals.

Notoriously hardworking, skillful, and energetic, Carvalho painted many altarpieces and church ceilings, and his drawings show his work in detail.

The painter’s sketching style stands out from other painters of his time, as it is simple yet very expressive in character: they are visually compelling through their theatrical quality and style. Carvalho’s studies are very simple and uniform, yet full of details, precision, and liveliness.

His dramatic figures produce a compelling narrative, much like a play, and this story-telling makes his work stand out. In addition, his well-defined figures are full of expression, which is rare for the late Baroque and distinguishes him from his contemporaries.

These qualities and his high technical skills greatly increased his popularity during his career  and helped him get multiple commissions.

His ink studies show how his personal style creates great visual impact, even if he followed traditional themes and allegorical figures of the later Baroque period. For example, he accentuates theatrical gestures in his figures, which increases the overall dynamism and gives his compositions a sense of grandiosity.

The artist used brown ink and Indian ink washes, with contours in pen. His technique was to draw the outlines of a figure with a quill and brown ink, then apply different washes with different dilution levels in either the same brown shade or in grey tones from Indian inks. This technique creates shadows, lights, volume, and definition.

There are also allegorical figures of Wisdom with the Portuguese royal coat of arms, referring to services rendered by the dukes of Lafões; of the sciences and virtues for the ceiling of the Academy of Science’s library; as well as the marriage of Queen D. Maria I and King D. Pedro III of Portugal. There are also mythological drawings, such as “Apollo and the Muses” and “The Fall of Phaeton.”

To this day, it is not known what the main purpose of his drawings were. They could have been transfer grids for his paintings, but this was a rare practice for him. They could also have been a way to keep an inventory of his work once the large formats were completed. More likely, they were drafts, as a way to show his work to religious organizations or members of the brotherhoods who commissioned the work for approval.

This late Baroque painter was the disciple and collaborator of famous Portuguese painters André Gonçalves and ornamental painter João Mesquita. Carvalho trained in Portugal, which was unusual for the time. He dreamed of travel to Italy but never did. However, his work is still based on Italian models, probably inspired by engravings.

His oil paintings, temperas, and frescos are found in dozens of churches and palaces in  Portugal, such as the churches of Bemposta, Loreto, Mártires, Mercês, Sacramento, Santos Reis (Campo Grande), and in Lisbon’s cathedral, the Sé. The painter contributed to Lisbon’s artistic and architectural heritage also through painting Lisbon’s monuments.

He is especially known for altar screens, an often richly decorated partition separating the nave from the chancel in a church.  Carvalho’s screens were unique in that they were more like a fabric than others, which were made of wood. His altar screens could be moved, much like a theater curtain, to exhibit a sculpture or sacred component in a service. This way of exhibiting a work of religious art gives a theatrical dynamism to Portuguese altarpieces.

Carvalho created a legacy through his dynamic and expressive compositions as well as teaching the next generation of artists. He taught in some of Lisbon’s first academies and his work was celebrated by officials of Lisbon’s Academy of Fine Arts throughout the 19th century.

Historians have noted that “[h]e greatly contributed to the decoration of churches reconstructed after the 1755 earthquake and can be considered as the last great Baroque painter in Portugal.”

At the time he worked, Carvalho stood out from his contemporaries through the liberty he took in his compositions, his unique style, dynamism, and structure. Art historians have noted that he has never received the critical recognition deserved for an artist of his rank. This exhibit at the National Antique Art Museum aims to celebrate his work and his legacy.

Carvalho’s drawings are on exhibit until July 3, 2022 in the National Antique Art Museum in Lisbon, Portugal.