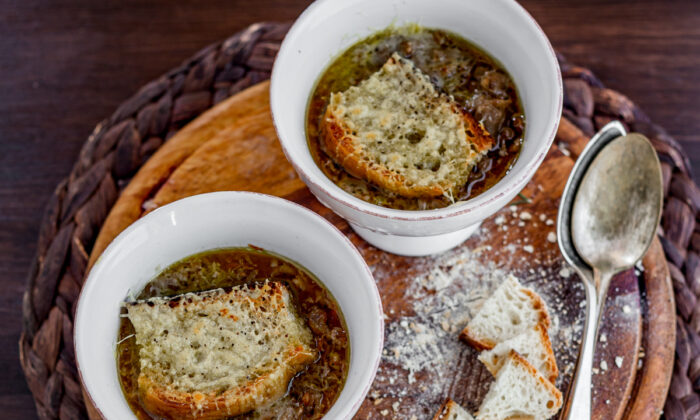 A heap of thinly sliced onions, slowly cooked down, form the base of this comforting, intensely savory soup. (Giulia Scarpaleggia)
Recipes

The fight between Florentines and the French for the paternity of certain culinary classics, such as duck in orange sauce and crepes, is destined to have no winner. Whether it was Catherine de Medici who brought them from Florence to France, or on the contrary, French gastronomy that inspired Florentine cooks, the delicious results are the same.

These recipes, born in the years of the Renaissance or even earlier, are full of flavor but delicate, with perfectly balanced ingredients. They have kept intact the imprint of the past, even as they’ve evolved to match the changing tastes of diners.

Take carabaccia, a Florentine onion soup—the predecessor, some would argue, to the French soupe d’oignons. In the beginning, the recipe also included almonds, sugar, and cinnamon, a clear reflection of the Renaissance-era taste for joining savory and sweet. Today, almonds are substituted with legumes, such as broad beans or peas.

It’s amazing how a heap of slowly cooked onions can turn into such a hearty and comforting soup, an embrace on chilly evenings. The classic presentation calls for a slice of stale bread placed at the bottom of the bowl and a sprinkling of pecorino cheese on top, but I like to copy the French: with a piece of cheese-covered toast on top.

Soak the peas in water for a few hours before making the soup.

Combine the onions, carrot, celery, and olive oil in a large pot. Cook on low for about an hour, until all the liquid is released from the onions.

Drain the split peas and add them to the pot. Pour in the stock in several additions, waiting some time between each one. Continue cooking for at least 30 minutes more; the peas should be soft and the soup rather dense.

Ladle the carabaccia into 4 ovenproof soup mugs or bowls. Place a slice of stale Tuscan bread on top of each, along with a generous dusting of grated pecorino cheese and a drizzle of olive oil.

Broil in the oven until the cheese melts, forming a golden, stringy crust. Serve immediately, accompanied by more bread and cheese, if you like.

Giulia Scarpaleggia
Follow
Giulia Scarpaleggia is a Tuscan-born and bred food writer, food photographer, and author of five cookbooks, including “From the Markets of Tuscany.” She is currently working on her sixth cookbook. Find her online at her blog, JulsKitchen.com