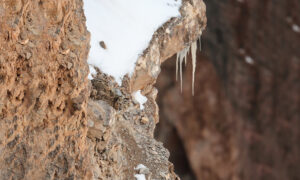 Can You Spot the Expertly-Camouflaged Snow Leopard in This Photo of a 'Barren' Cliff Face?
0
Share Now
TelegramFacebookTweetEmailTellMeWeReddit
Copy Link 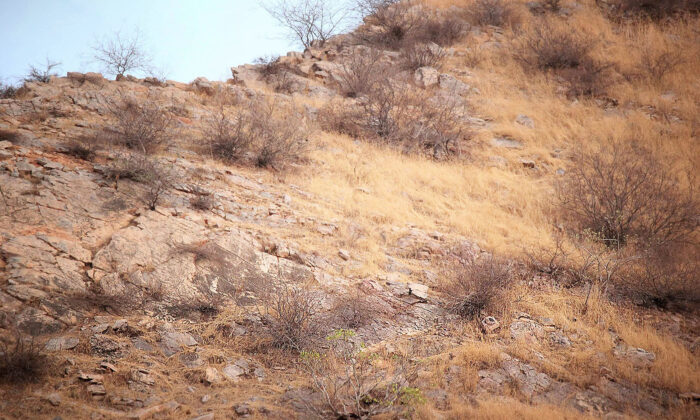 Can You Spot the Camouflaged Leopard Blending Perfectly Into This Rocky Hillside Scene?

A photographer in India managed to capture on camera an elusive leopard showing off its impressive ability to camouflage on a rocky hillside.

Abhinav Garg, 34, had no idea he’d managed to capture the leopard in his shots on June 5, until after he’d gotten home.

He’d waited hours for a sighting after locals told him about the leopard while he was visiting the Aravali Hills in Jaipur in western Rajasthan.

Here’s one of the photos that Abhinav took; can you spot the leopard in the rocky hillside scenery?

“It was really the best camouflaged animal I had seen in my life,” the amateur photographer from New Delhi said.

Abhinav, a web engineer by trade, was on a visit to a temple when locals told him about a leopard sighting.

“It was lovely weather on a Saturday evening and we reached the temple around 5pm,” the photographer added.

“This temple is surrounded by Aravali Hills and temple priest told us many stories of leopard sightings.

“While returning from the temple few villagers were discussing about leopard sitting on the rock in hills opposite the temple.”

Excited, he placed his camera facing the rocky patch on the hill, but much to his dismay, he couldn’t spot the leopard after waiting for several hours.

It was only after he transferred the photographs onto his computer that he realized the leopard was in the pictures.

“We also tried to see the leopard but we could not spot it despite waiting for some time,” Abhinav added. “We decided to leave as it was getting dark and I clicked some random shots of hills without sighting leopard.

“After returning home, I transferred all pictures on my laptop and started zoom in them.

“To my utter surprise, I found a leopard resting on rock which was not visible from naked eyes earlier. I had not seen a leopard before and I was really excited to spot it.”

Here is another shot of the hillside; try and locate the leopard hiding in this landscape.

The leopard is right here.