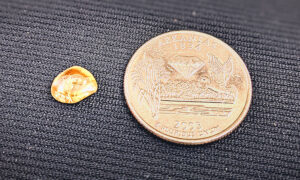 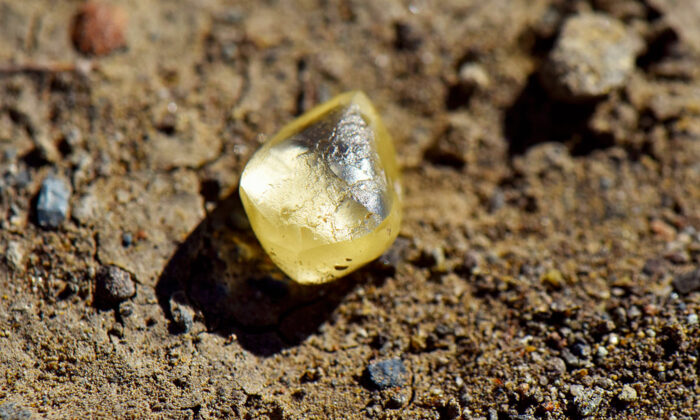 Noreen Wredberg and her husband Michael from Granite Bay spend much of their time traveling to national parks in the United States; and found themselves at Crater of Diamonds on Sept. 23, while they were visiting nearby Hot Springs National Park—the trip turned out to be more than worthwhile.

They began searching the soil in a shaded area near the park entrance where it was chilly in the autumn air; so Michael suggested they venture into the open field where it was sunnier and warmer.

Just 40 minutes into their jewel hunt, Noreen spotted the yellow diamond sparkling on top of the soil. She handed it to Michael who took it to park staff to identify, who confirmed it to be authentic.

“I didn’t know it was a diamond then, but it was clean and shiny, so I picked it up!” said Noreen, who first saw the park featured on TV a few years earlier.

The gem weighed 4.38 carats, making it the largest diamond found in the park since October last year, when a visitor from Fayetteville discovered a 4.49-carat yellow diamond.

That very same soil has yielded 258 diamonds so far in 2021, averaging one to two diamonds found by visitors per day. The most common diamonds found at Crater are white, brown, and yellow, in that order.

“We plow the search area periodically to loosen the soil and promote natural erosion,” park interpreter Waymon Cox said in a statement. “Diamonds are somewhat heavy for their size and lack static electricity, so dirt doesn’t stick to them. When rain uncovers a larger diamond and the sun comes out, its reflective surface is often easy to see.

“Many visitors surface search for diamonds after a good rain,” he added. “More than one inch of rain fell at the park between Sept. 19 and 21. The soil had dried a little, and the sun was out when Mrs. Wredberg visited two days later.

“She was in just the right place to see her diamond sparkle in the morning sunlight!”

Traditionally, diamonds found at Crater are given names by their finders; Noreen named hers Lucy’s Diamond, after her cat who is grayish with hints of yellow, matching her owner’s new “lemonade colored” diamond.

Noreen says she may have the diamond cut, depending on its purity, but doesn’t know how much it’s worth yet. Crater of Diamond staff are not trained in appraisal.

Arkansas is the only state in the country that has a diamond mine open to the public. It was first made into a state park in 1972.

On Labor Day 2020, Kevin Kinard from Maumelle found a brown 9.07-carat diamond—the second-largest diamond ever found at the park.