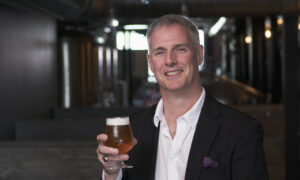 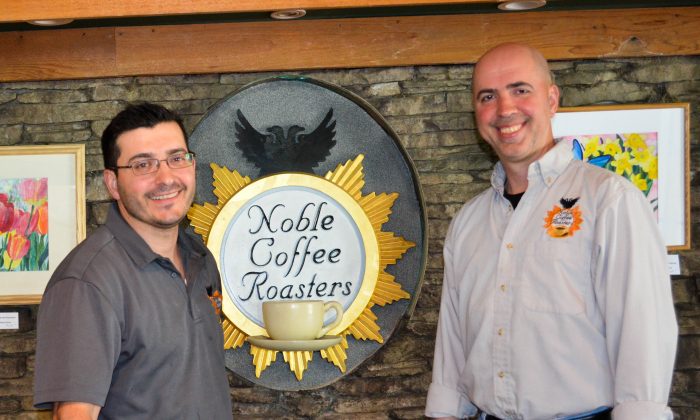 (L-R) Paul and Robert Deckaj at Noble Coffee Roasters and cafe in Campbell Hall on May 23, 2016. (Yvonne Marcotte/Epoch Times)
Drinks

CAMPBELL HALL—A café in Campbell Hall invites guests to enjoy a favorite beverage of the Sun King, Louis XIV—coffee. Noble Coffee Roasters roasts quality coffee beans from around the world, sells ground coffee wholesale, and serves coffee in all its forms within its own café on the premises.

The Deckaj family operates the business at the corner of Stony Ford Road and Route 207. Today Robert Deckaj manages the coffee roasting and wholesale end while younger brother Paul manages the café.


Their father Gjok, or Jack as he is known, fled Albania in the 1960s and got into the coffee business about 30 years ago. “He put a lot of sweat equity into it. It was basically out of the back of a car,” Robert says. “He saw a niche. He found a need for good quality service and a good quality product and he jumped in.”

Robert, a first-generation Albanian-American, got involved right out of high school. “It’s a love of mine, so I got right involved.”  The Deckajs distributed coffee wholesale to cafes, hotels, and delis—”Anybody that sold coffee retail, we would try to get them wholesale.”

Even today, Robert says people might not even know their coffee comes from Noble Coffee Roasters. He says the company sells to retail outlets in New York, New Jersey, and Pennsylvania. Noble sells “anything coffee-related,” including coffee and espresso machines on the wholesale side.

The family thought there was a need for a European-style, country-style café where people could meet. Growing up in Campbell Hall, the boys often drove by their present location. “We always liked it and, you know what, that would be a great place for a café. We built it so it’s warm and it’s not a very cold feeling. [Customers] just feel comfortable here.”

The Deckajs named their establishment after Louis XIV, the Noble King.

The Deckaj’s named their establishment after Louis XIV, the Noble King. Legend has it that a 9th century Ethiopian goat herder named Kaldi discovered coffee. The family liked this story. “We picked up on it coming into the coffee business,” Robert said.

In one version of the legend, Arabs first cultivated coffee around 1000 A.D. Word spread to Europe. The drink was served in pubs and was a favorite of Louis XIV, who took his role as king to be “grand, noble, and delightful,” according to one historical account by Jackson J. Spielvogel.

Robert says clippings from a coffee tree in the king’s botanical gardens were carried to Martinique in 1723 to establish the first coffee plantations in the New World. A young naval officer, Gabriel de Clieu, managed to transport it safely to Martinique.

“[Louis XIV] sent it to the New World and just a couple of the trees survived,” Robert says.

According to legend, troubles at sea left the crew with little water but de Clieu shared his meagre water rations with two of the plants and kept them alive.

The Deckaj’s grandparents arrived in America after WWII. Robert and Paul’s parents fled Albania when communists took over the country. Robert said his father and grandmother were incarcerated in a concentration camp but escaped.

“Our father’s side and our mother’s side both fought against the communists,” Robert said.

Catering to the Customer

Noble Coffee Roasters is a family-owned business. Robert says they are there to serve the community. “We love our community. We love the Hudson Valley, giving a great cup of coffee.”

To make the café a place for the community to gather, Noble has regular evenings for poetry readings. On Friday and Saturday nights, they invite musicians to entertain customers.

“It’s part of the whole feeling of coming to your café—like European coffee houses where people come in and talk politics or talk religion or talk whatever the news of the day was. That’s what we try to put back into the café.” The café is closed on Sundays.

Robert runs the roasting section of the company. On May 27 he ground a custom dark roast Costa Rican Tarrazu Montecielo coffee beans. “This comes in green and what we will do is put it through the roasting process.”

The customer, the owner of a high-end convenience store in New Jersey, wanted better coffee for his customers. Robert said the coffee would be delivered to the customer tomorrow. “It’s not going to get much fresher than that.”

The coffee roasting side of the business caters to the needs of the wholesale customer. “We make sure the coffee is good quality first, and that it’s roasted correctly afterwards.” The quality is judged by taste. “Taste. That’s the only way,” Robert said.

“There are certain areas that are producing a better-quality coffee and that’s what you start with, but just because they say it’s a good quality coffee, it doesn’t mean it will be.” The next batch to be roasted that day was a Kenyan coffee.

I know it sounds like a commercial but we really want to give great service and a good quality product.
— Robert Deckaj, Coffee Roasting Manager, Noble Coffee Roasters

The family-operated coffee business has come a long way from the back of a car and Robert says it comes out of serving the customer. “I know it sounds like a commercial but we really want to give great service and a good quality product.”

Robert says they have found a great niche where they are. “We like the size where we are at. We are getting a little bit bigger, but it’s controlled growth.”

Noble Coffee Roasters is very much customer-centered. “We just want to deliver a great cup of coffee on the wholesale side and the café side.”