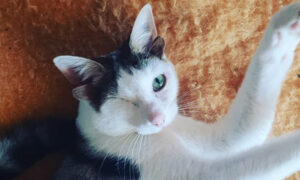 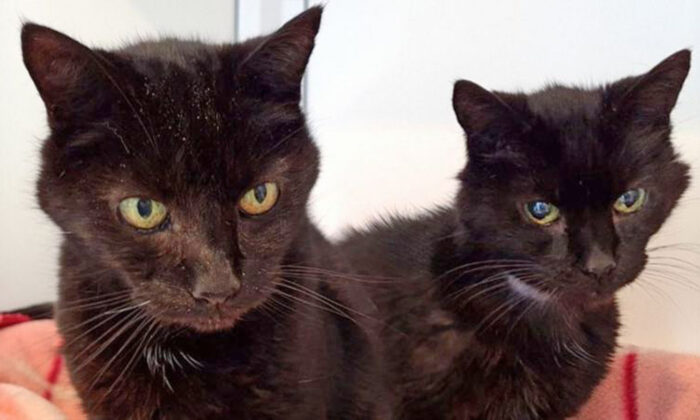 A heartfelt social media campaign sparked a huge response after a pair of cats were relinquished at the age of 21. The “senior kittizens,” believed to be the oldest living cat siblings in the United Kingdom, have since found their forever home to live out their remaining days.

Nikita and Leon are black shorthair mixes and have been best buddies since birth. Upon their arrival at the RSPCA animal shelter in Northamptonshire, England, staffers immediately warmed up to the quiet, affectionate brothers.

An adoption team member, Michelle Billingham, told the BBC that the lovely boys came into the branch “through no fault of their own.” The team launched a fervent search for an adoptive home in the local area, and hundreds responded to their request.

“Poor Leon and Nikita found themselves in our care at the grand age of 21,” the RSPCA wrote in a now-deleted post on Facebook. “They are bonded brothers and were signed over to be rehomed as they were not coping with family life.”

The brothers were both in “fairly good health” upon arrival at the shelter, although Nikita was diagnosed with hyperthyroidism. He is now medicated but will need regular blood testing to see how he is responding to medication.

“Due to their age, we were keen to get these lovely boys settled into a new home asap,” the RSPCA explained.

The affectionate pair needed a quiet home with no kids. Staffers cited “chin tickles and human company” as two of Leon and Nikita’s very favorite things.

Adoption team member Julie Clifft called the response to the campaign “pretty crazy.” The team had over 100 applications, some hailing from as far away as the United States. However, in their enthusiasm, many willing adopters glossed over the criteria of needing to live in the local area.

“We really wanted to keep them together in Northamptonshire,” Clifft said, according to the Daily Mail. Luckily, the popular kitties garnered so much attention that their team was able to cherry-pick the perfect home.

The Royal Veterinary College claims the average life expectancy of a domestic cat in the UK is 14 years of age, although many live longer.

While Leon and Nikita have made headlines as Britain’s oldest-known cat siblings, the oldest cat on record was a Maine Coon called Creme Puff, from Austin, Texas, who lived to be 38. The Guinness World Record states Creme Puff’s birth date as Aug. 3, 1967; the super-senior feline passed away in August 2005.

After the joy of finding Leon and Nikita a forever home in which they will enjoy their winter days, the RSPCA set up a “Senior Kittizens” fund in their honor to help older cats in the future, an RSPCA representative told The Epoch Times via email.

“We never put a healthy pet down,” Clifft told the Daily Mail, “and [Leon and Nikita] deserved a new home.”