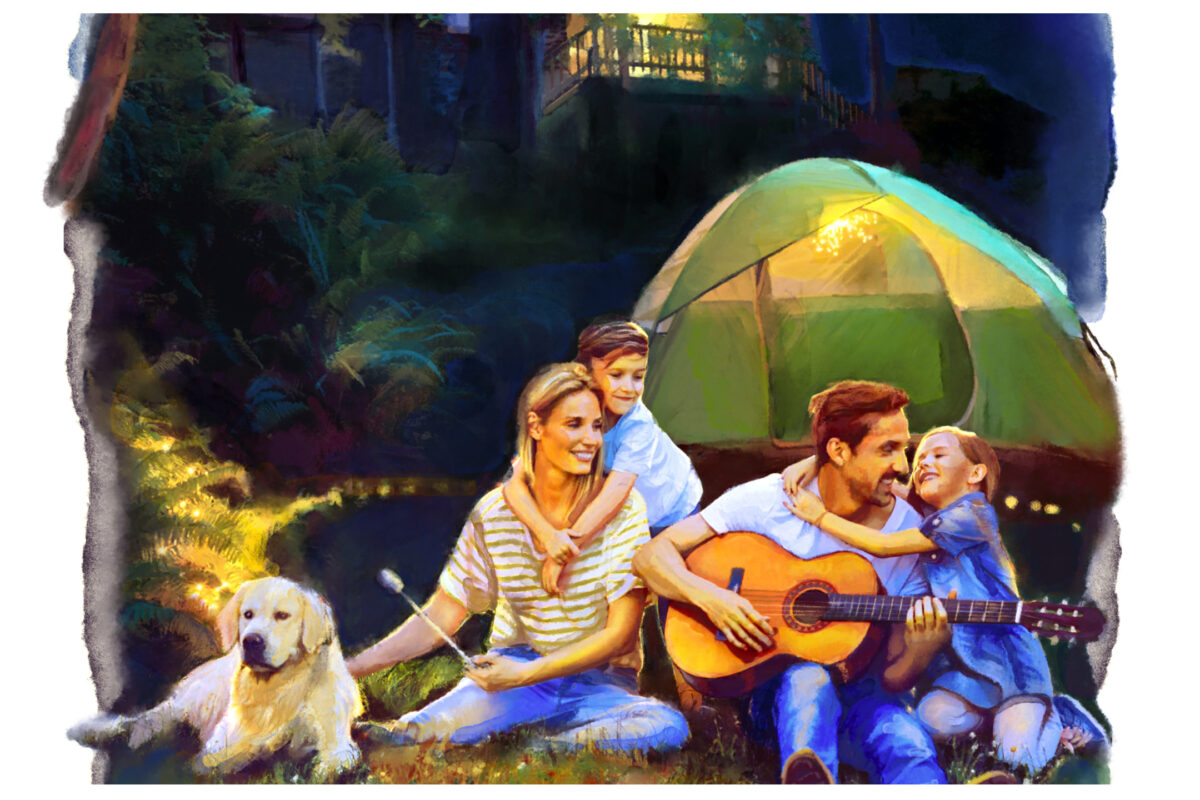 Pitch a tent in your own backyard. Bonus: Modern amenities await just a few steps away. (Biba Kayewich)
Family & Education

In 1987, a beaming New York Giants quarterback was the first person publicly asked what soon became a well-known question: “Phil Simms, you’ve just won the Super Bowl! What are you doing next?”

Many average Americans couldn’t give Simms’s answer today. The reason isn’t Disney’s “woke” policies, but the fact that families can’t afford the cost of a trip to “the happiest place on earth.” But it’s not just Disneyland that’s unaffordable, according to a recent article in The Hustle. Other classic American outings, such as baseball games and movies, are also beyond the budget of many average families.

That hasn’t always been the case. In 1960, it required 3.8 hours of work to afford a baseball game, 1.4 hours to afford a movie, and 13.5 hours to go to Disneyland. Now, the cost of those activities has increased by 32 percent, 22 percent, and 96 percent, respectively.

Given that times of togetherness are essential to the well-being of the most basic building block of society, the family, it’s a shame that these activities are out of reach to many. Perhaps it’s time to think outside the box and consider how families can still have bonding time, just with a cheaper price tag. Having grown up in a family with a limited budget, I have a few practical ideas up my sleeve.

On hot summer nights, your family can lounge around inside, or you can drag everyone outdoors and have a water fight. Throw a few water balloons or squirt guns into the mix or just use the garden hose and buckets of water. Cooling down this way guarantees many hearty laughs, bonding families, and lifting spirits in the process.

Better yet, invest in a large, sturdy kiddie pool and have everyone pile in. Apologies in advance to my family for sharing secrets, but we did this when I was little. My parents donned swimsuits, and Dad would swim around in a circle, often with one of us kids riding his back, making a current in which we would all float. The absurdity of the situation alone explains the many peals of laughter emanating from that pool, and that laughter echoes today when one of us reminisces about those hot nights.

Pitching a Tent in Your Own Backyard

Compared to Disneyland or other expensive hotels, heading to a state park and setting up a tent is far more economical. An additional perk of tent camping is that kids learn to “rough it” by chopping wood, carrying water, and observing real nature rather than a screen of virtual nature. Putting the tent in the backyard provides the same cheap thrills, but with modern amenities and fewer wild creatures lurking at your tent flap.

Who needs theme parks when you have historical sights to visit? OK, so maybe I was a strange child, but I always found visits to the old mansions or turn-of-the-century farms in our state to be way more fun than roller coasters. It’s particularly fun if you know a fair amount about history, enabling you to either impress or stump your tour guides with informed questions. (Yes, the time my family and the group of old ladies we were with hijacked a tour of Glensheen Mansion in Duluth, Minnesota, from our cocky, college student tour guide because of our combined historical knowledge was a barrel of laughs for all involved—even the humbled guide—and it still ranks as one of the most memorable tours we took!)

I haven’t been to the movie theater in years, but that doesn’t mean I don’t watch movies. When I hear of one that I want to see, I head to my local library’s website and put in a request for the DVD version of it—some libraries even offer streaming now—getting my name down first on the waiting list, which usually means I only have to wait a few months from the time the movie hits the big screen to see it. You may laugh at the slowness of this method, but seriously, when has a little delayed gratification ever hurt anyone?

Take Me Out to the Ball Game

It’s probably been at least five years since I’ve been to a professional baseball game, but the last time I was there, it seemed like there was far more attention on extra entertainment than there was on the field. So if you really are interested in baseball, why not just start your own team? Get the kids together, round up a few other families, and plan regular baseball nights. Such a plan gives everyone exercise, builds community spirit, and perhaps most importantly, gives kids a chance to interact with adult role models to learn about teamwork and good sportsmanship.

These approaches to family outings are economical, but they also cultivate something essential to a thriving society, namely, freedom.

These events are locally driven, only happening when individuals plan and provide the entertainment and an event for gathering. By contrast, the other outings—traditional ball games, movies, and even Disneyland—are all driven by massive conglomerations, taking families out of their local communities and using them to make a fast buck. And when families move away from these mega corporations and create their own activities and fun, they have a better opportunity to breathe free.

“People are less than whole unless they gather themselves voluntarily into groups of souls in harmony,” author John Taylor Gatto wrote in “Dumbing Us Down.”

“Gathering themselves to pursue individual, family, and community dreams consistent with their private humanity is what makes them whole; only slaves are gathered by others. And these dreams must be written locally because to exercise any larger ambition without such a base is to lose touch with the things which give life meaning: self, family, friends, work, and intimate community.”

Do you want to ensure you’re not a slave? Then work toward bonding with your family and friends at a local level. It will free you financially—and physically, mentally, and emotionally as well.