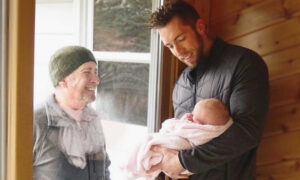 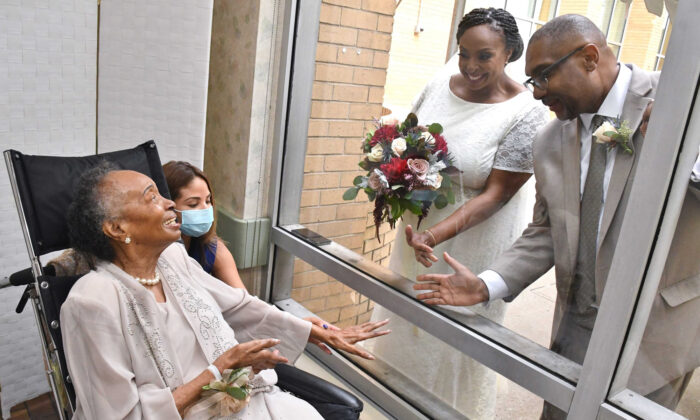 Bride Marries at Nursing Home So Mom, 89, Can Attend Amid Pandemic

When the pandemic put paid to a couple’s wedding plans, they chose to forge ahead with a smaller-scale ceremony. But one thing that the New Jersey bride was unwilling to compromise on was having her 89-year-old mother there.

For the last 13 years, Robyn Roberts-Williams’s mother, Dorothy Roberts, has been a resident of the Isabella Center for Rehabilitation and Nursing Care, a member of MJHS Health System, in Washington Heights, New York.

Though the facility had visitations restricted as a precaution against the pandemic, on Oct. 10, a beautifully dressed Dorothy got to witness her daughter’s nuptials from her room, separated only by glass.

Making it possible for her mother to attend the wedding was “an absolute priority” for Robyn, reported Patch.

“That day was my 52nd birthday and this is my first marriage,” Robyn told Patch. “So for my mom to be there, my prayer has always been that.”

Robyn and Timothy received approval to hold their wedding at the center’s courtyard in September and planned their special day in just one month, according to the report.

A guest list of eight joined them for their vows, ring swapping, and the all-important kiss while Dorothy, beaming with pride, had the best seat in the house.

Dorothy was equally touched by the proceedings.

MJHS Health System, whose “resounding yes” to Robyn and Timothy’s request made the happy day possible, later shared a series of stunning photos on Facebook.

Garcia-Robinson, the center’s therapeutic recreation director, told Patch that Dorothy’s family is like their own family.

“It was honestly a privilege to have done this for them,” Garcia-Robinson said.

News of the unusual nuptials also spread within the close-knit Washington Heights neighborhood before the day was over. As the newlyweds left the Isabella Center, the streets came alive with a chorus of cheers and well-wishes.

“There were people on the street, people in their cars, people outside their windows and apartment buildings,” Roberts-Williams told Patch, “it was just incredible.”

“There were only 10 of us in the garden, but the celebration around us was just amazing,” Roberts-Williams said.

“All of that happened organically, we didn’t plan for any of that to happen.”