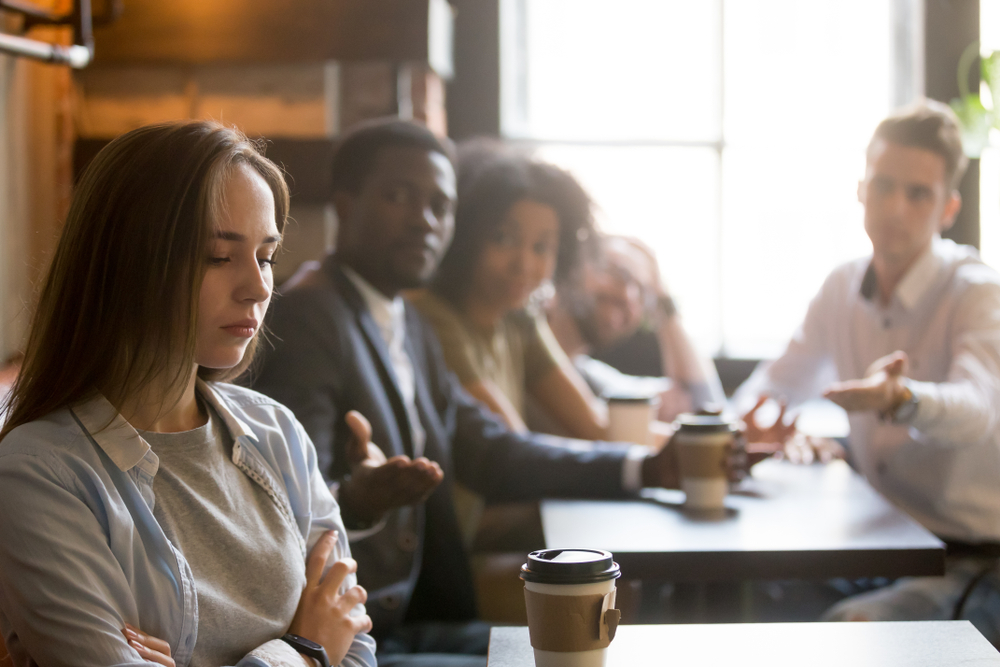 While people tend to start off in one of the roles (victim, persecutor, or rescuer), the roles shift during dramatic conflicts, and we may find ourselves in any of them. (Shutterstock)
Family & Education

Breaking Free of the Victim Mentality

The concept of the Drama Triangle can help you understand underlying dynamics of the victim mentality and find an exit
BY Michael Courter TIMEJanuary 17, 2020 PRINT

Do you ever find yourself in a perpetual series of interactions with someone that lead to anger, guilt, and other painful emotions? You may be caught in a social game on the Drama Triangle.

The Drama Triangle model is an exceptionally useful structural diagram for understanding the dynamics of toxic interactions and how to escape them.

The concept was developed in the ’60s by Dr. Stephen Karpman, who observed the consistent roles that people adopt in high-conflict, dramatic interactions. The roles and patterns of interaction are so consistent in these situations that the Triangle is a nearly universal model for understanding interpersonal drama and conflict.

The social maneuvers on the Drama Triangle are also referred to as games, since each move has an overt meaning and purpose, as well as a hidden agenda that is meant to advance a player’s position.

Being able to see these dynamics clearly is the key to breaking away from them and the victim mentality they reinforce. Let’s explore this model.

The roles are victim, persecutor, and rescuer. While people tend to start off in one of the roles, the roles shift during dramatic conflicts, and we may find ourselves in any of them. As I describe them, see if you can see yourself or other people you know engaging in the following behaviors.

The persecutor is the villain of the drama, so most people are fighting to stay out of this role. The persecutor vents angry emotions and deals out punishment, blame, and criticism to the victim. When people find themselves in this role, they justify their behavior by blaming others. They don’t clearly see or take responsibility for what they are doing, because they believe the victim deserves their punishment and criticism.

The rescuer is the hero of the drama because this person is trying to rescue the victim. While most people in this role believe they are being helpful, and those acting as the victim believe they need that help, the rescuer reinforces the victim’s belief that they can’t help themselves. This ultimately keeps the victim stuck in a dependent position, powerless to solve his or her own problems.

People who are rigidly tied to the rescuer role can be caught up in a series of relationships in which they support other people who can’t function without them. They can’t see the collateral damage caused by their actions because of their powerful belief that they are “only trying to help.”

The victim is the key role in the drama. The advantage of being the victim is that other people are obligated to take care of this person, who can’t take care of himself. It isn’t his fault, because someone else is to blame, and there’s nothing he can do about it. This is a tempting position to hold because the victim deserves care and support from other people and thus doesn’t have to take responsibility for the situation.

In order to understand and end the game, it’s also important to understand that the roles switch. The rescuer collapses into the victim when all of those valiant efforts fail. The victim becomes the persecutor when no one cares for him or helps with the terrible situation that he is in. The persecutor switches to the rescuer when he realizes he has “done it again” and seriously hurt the victim.

A myriad of things can cause the roles to change, and the faster the changes, the more bewildering and confusing the game becomes.

The game played on the Drama Triangle can be seen as a competition to get to the victim role. The persecutor had no other choice and the rescuer was only trying to help. We camouflage our desire to be the victim by focusing on finding someone or something to complain about or a situation that is not fair. Because the potential list of these things is infinite, we can always justify a legitimate reason why we are the victims.

That is why these interactions can also be thought of as simply blaming others; blaming statements are the staple of personal arguments.

That isn’t to say that there are no legitimate reasons to play these roles at various times. Police, prosecutors, coaches, and parents need to maintain order and discipline. Everyone needs care and help sometimes, if only while a baby or child, and there are legitimate victims of crime and abuse. It’s kind and noble to help others selflessly when they are in legitimate need.

It’s the hidden motives that we conceal from ourselves and others that make the interactions a toxic game. With thoughtful observation, you can see the difference between legitimate needs and hidden agendas. If a pattern is playing out repeatedly, in different situations over time, it’s probably a game.

The Drama Triangle in Society, Politics

The Drama Triangle also shows itself in various situations in society, as groups of people enact these roles and compete to be the rescuer or victim. It’s easy to take advantage of these mentalities on a social level by convincing various groups that their unfair situation is the result of being the victims of something or someone. This may be the key method, used throughout history, to turn groups against each other.

One of the powerful uses of the Drama Triangle is that it makes explicit and clear something that was previously hidden or obscured. It’s much easier to leave the game when you can see what’s being played.

You need simply to refuse to participate and decline to play your role. Really dedicated players will then demand that you return to the game. Be prepared for dramatic responses and attempts to make you feel guilty, but don’t buy in. Refusing kindly and firmly to engage is the only way out of the toxic game. It’s also necessary to understand the opposite of the Drama Triangle. People need to learn to directly ask for the love, support, recognition, and validation they want from others, instead of seeking it indirectly, while hiding their motives.

You can let them know that you are willing to offer help, love, or care when they ask for it, and you can make your own choice clear: “I am done with this toxic drama!”

Michael Courter
Michael Courter has a master’s degree in Social Work with distinction from California State University Chico and is certified in Parent Child Interaction Therapy. He has been treating individuals and families since 2006.
SHARE
Friends Read FreeCopyFacebookTweet
SHARE
Friends Read FreeCopyFacebookTweet
You May Also Like