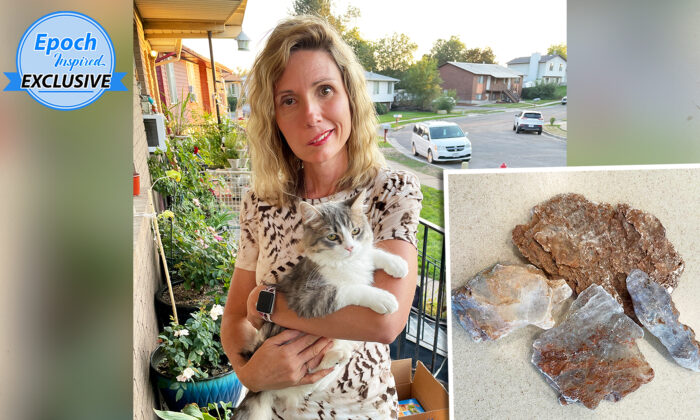 A brain tumor survivor saw a chance to do good when she came across a child selling rocks. Offering to buy four instead of one, she reduced the child to tears, and through her generous gesture allowed the little girl to keep her beloved pet cat.

Mom of four Jodi Orgill Brown of Ogden, Utah, saw Lizzie—who she estimates to be a 10- or 11-year-old—in Riverdale on Sept. 2 while driving her son to a doctor’s appointment.

“I first saw her and was intrigued by her sign, ‘Rocks for sale,'” Jodi told The Epoch Times. “I knew I had to talk to her … my first thought was, ‘Wow, if she’s selling rocks, she must not have anything else to sell.'”

Jodi, 45, survived a brain tumor 12 years ago and claims she is “always looking for those who might be in need of a little ‘lift’ or a bit of positivity,” as she understands firsthand the impact of these actions.

Driving home, Jodi approached Lizzie and asked about her rocks. The rocks were from Oklahoma where her dad lived, Lizzie replied. She also told Jodi that she had tried selling them door to door and had also stood outside for two hours that day but had no success.

After listening to her, Jodi handed Lizzie a $20 bill and the child’s face fell—she didn’t have change—until Jodi explained she wanted to buy four $5 rocks and no change was needed.

On hearing this, tears began to roll down Lizzie’s face.

“She explained that, in order to keep her pet, a cat, she had to help provide and pay for the cat,” Jodi said. “With $20 she could buy food.”

She also mentioned to Jodi that the cat was her best friend, and she was so grateful she’d be able to do her part.

“The rocks were unique … she uses even the little broken pieces; she wraps them with wire and turns them into pendants,” Jodi praised. “She was a young entrepreneur … I wanted to not only make her day, but change her life by showing her that someone valued her products and believed in her.”

After meeting Lizzie, Jodi posted the heartwarming encounter on Facebook and the story went viral. Not only were people moved by Lizzie’s project and Jodi’s gesture, but they also wanted to help.

“The minute I posted it online, my phone started buzzing with comments and responses and shares,” Jodi shared.

“Some bought rocks, and some sent packages of cat food!” said Jodi, who amassed $810 in cash and $50 in gift cards for the little girl. She visited Lizzie and her cat, Goose, two weeks later with Lizzie’s mother’s permission.

Being on the receiving end of the kind gesture, Lizzie got down on her knees and sobbed claiming that it was the best day of her life and that Jodi would be her “best friend forever.” Her grateful mom reasoned, “When you are a good person, good things happen.” Amid hugs and more tears, Lizzie gifted Jodi her most beautiful 5-pound crystal rock as an expression of “Thank you.”

Jodi is a professional keynote speaker, author, and nonprofit consultant. Explaining more about her brain tumor, she said that, after three craniotomies and 35 days in critical care, she was left with facial paralysis, a spinal fluid leak, a brain infection, permanent dizzy spells, chronic migraines, and she lost her hearing in the right ear.

Additionally, Jodi says she’s had 12 surgeries to repair and reconstruct her body from the impact of the brain tumor.

“So many times, it was the small and simple acts of kindness, love, and caring from others that kept me going,” she explained to The Epoch Times.

Reflecting a little on “random acts of kindness,” Jodi said: “I really don’t ever think it is random. I believe we are put in the paths of others and given the opportunity to help them, and vice versa.”

She continued, “Our decision to help isn’t random, either; it starts with a prompting or thought, gets reinforced by a belief that we could do some good, or be of some help, and then we must choose to act. When we are intentional, nothing is random.”

Thus, by helping Lizzie that day, Jodi was able to stay true to her personal philosophy: “Every interaction is an opportunity to change a life.”